Charming. That's the one surefire way to describe Aussie superstar Hugh Jackman, currently in Toronto to perform his one-man show, Hugh Jackman in Concert, at the Princess of Wales Theatre.

The jack-of-all-trades actor delivered a spirited performance of Broadway and lounge classics that featured a turn as the flamboyant Peter Allen as well as a tribute to his wife, Deborra-Lee Furness.

Accompanied by an 18-piece band, Jackman worked the room of fans and admirers with a flash of his pearly whites and classic tunes "I Won't Dance," "Fever," and a mash-up of "A Little Less Conversation" and "Shake Your Booty."

Jackman became a household name after being cast as the Canadian mutant with retracting claws, Wolverine, in the 2000 X-Men film. From then on, he's played leading man to some of the most famous stars in Hollywood--Scarlett Johansson, Nicole Kidman, and Meg Ryan to name a few.

Those expecting "Wolverine sings the classics" would have been sorely disappointed. Before X-Men, Jackman had already carved out a successful musical theatre career, skills he put on full display last night. He covered tunes from Carousel, The Music Man, and, Oklahoma. His medley of Broadway classics (from Gene Kelly to Marlon Brando) brought the house down.

In 2003, Jackman starred on Broadway as Peter Allen in The Boy from Oz, for which he won a Tony Award. After a mid-show costume change into a flashy sequined top, Jackman as Allen charmed with hits from the musical, "Not the Boy Next Door," "I Go to Rio," and "Once Before I Go." The role is a complete 180 for a man named People Magazine's Sexiest Man in 2008. 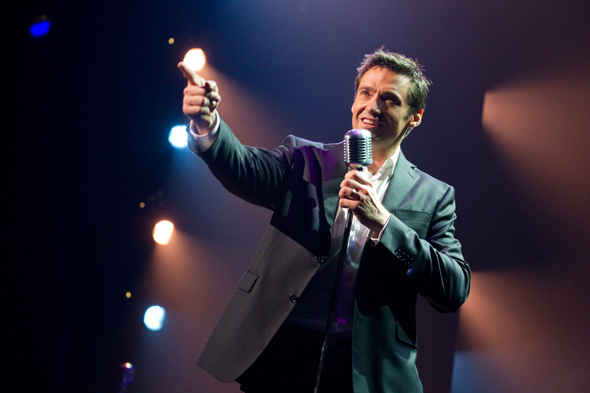 Rounding out the night, Jackman made it a family affair with a loving tribute to his wife, Furness, whom he met on the set of the Australian soap opera Correlli. Jackman's son Oscar, 11, made his stage-debut playing a didgeridoo in a rendition of "Somewhere Over the Rainbow," which Jackman sang with an Australian Aboriginal tribal elder.

Inspired by his time shooting Baz Luhrmann's Australia in the outback, Jackman has invited Aboriginal artists, part of the organization Nomad Two Worlds, along for the tour. The organization inspires collaborative projects between divided cultures.

Jackman is clearly at home in front of an audience. With ease and seemingly little effort, he dances and improvises his way through an intimate program. Rare is it to see an artist performing a show like this at their peak (we're usually treated to the twilight years). But Jackman is undoubtedly an artist at the top of his career. His one-man show hits all the right notes.

Hugh Jackman in Concert, presented by Mirvish, runs until July 17 at the Princess of Wales Theatre. Tickets range from $49 - $130.