Buddies in Bad Times Theatre is one of my favourite venues in the city, and has a great reputation for putting on original productions from new artists. Through the company's Young Creators Unit, a new generation of 25 and unders is able to launch their dreams into production. The latest of these accomplished writers/performers to hit the stage is Mark Shyzer, presenting his one-man comedy Fishbowl: A Concise. Expansive Theory of Everything.

A hilarious offering of 5 diverse character monologues, Fishbowl is set to wrap up a tidy first run tonight at Buddies'. Given that Mark's production is one of the first I've seen to emerge from the youth program, I was at first surprised by his aim of 'comedic sophistication' on the small stage. Though the show came off as a (very funny) stand up routine, Mark was kind enough to explain the process behind Fishbowl's evolution in his interview for blogTO. 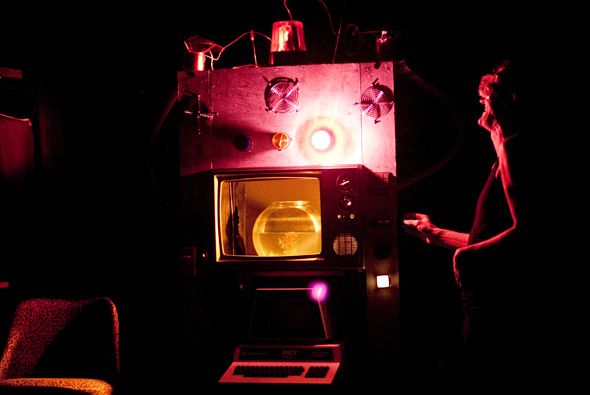 How did this project come about, and what was your inspiration?

The show started with a couple of unrelated character monologues I did for a lark at Queer Cab, Buddies' youth open mic. Evalyn (director) suggested I should put some of my characters together in an application for Buddies' Young Creator's Unit, which I did. I got into the unit and there I developed the first incarnation of Fishbowl, which was called The Truth About Goldfish - it was a half hour workshop presentation with three characters.

From there it's just been a process of building over the last year or so. There were things that I wanted the show to be from the very beginning, but most of it sprang up as we went along and explored the characters and themes. The show has grown like a weed.

So you originated with three characters, but how many do you play in this one man show?

I play five characters: a brilliant but gawky schoolgirl, an uber-hip/disaffected teenager, a middle aged divorced barfly, a 90 year-old man on the brink of death, and a pregnant jazzercise instructor.

Which one do you most relate to?

No question - Esther, the nerdy schoolgirl. I like to think I was never as awkward as Esther, but her highschool experience is pretty much identical to mine. In fact, most of her costume is my old school uniform. She's smart, but a bit of a loner, and often revels in her awkwardness. She's not terribly perceptive socially, but compensates by dedicating herself to her schoolwork... and her pet goldfish.

How was it working with the notoriously hilarious Evalyn Parry in the director's chair?

It's been a blast! Evalyn and I share a very similar sense of humour. During the last two weeks of rehearsal and especially while trying on costumes, there was a lot of giggling between us.

If you could sum up the show in one concise, expansive thought... what
would it be?

It's five big fish in a very small bowl. 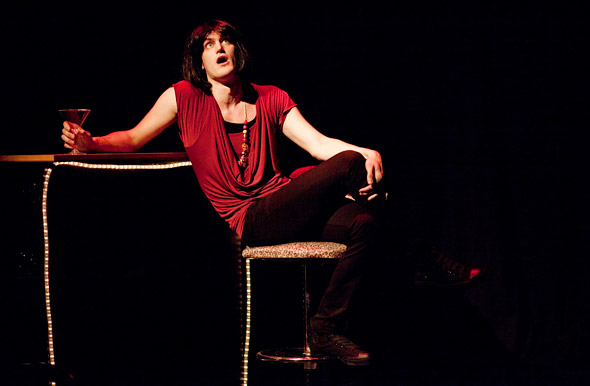 Although Mark comes off as serious and direct in his answers, he is really quite an erratic character on the stage. His transformation from one role to the next took just seconds, both in his performance and costuming as well as his position on stage.

By the end of Fishbowl's multiple personality incarnations, Mark seemed quite spent and made a quick exit; however his blog belies a little more of the unique sense humour behind the show:

"I spend forty five minutes sitting in the dressing room alone, then if there's no one in the audience who I know who wants to come out for a drink after the show, I just go home. That's the rough part of doing a one-man show: the cast parties suck."

[DISCLOSURE: Buddies in Bad Times, the presenter of Fishbowl, is an advertiser on this site.]