In Glengarry Glen Ross, which opened at the Young Centre for the Performing Arts last Tuesday, there are more expletives-per-second than Spring Awakening. Once you get used to all the swearing, the play itself is quite enjoyable.

This David Mamet play is about four salesmen trying to outsell each other as they compete for the sales bonus, a Cadillac, while trying to keep their jobs in a cutthroat business. First performed over 25 years ago, long before the the film adaptation came out, the prevalent theme of making ends meet when falling on tough times is just as relevant today.

The conniving, foul-mouthed salesmen try to get ahead of each other -- or just stay in the game -- when they realize it's eat or be eaten. This leads to some very entertaining dialogue from the salesmen, cheats and liars. 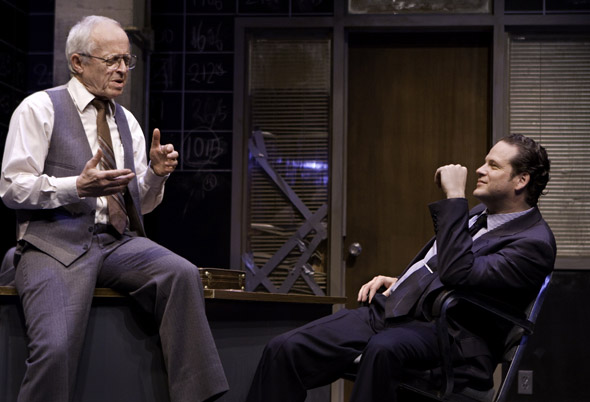 This Soulpepper Theatre production, directed by David Storch, is spot on in its portrayal of four salesmen in their quest to outsmart each other and their boss.

Jordan Pettle (who impressed me in his role of Tristan Tzara in Travesties) adds a new dimension in the sole management role as John Williamson, looking far younger than the rest of the cast. He's not as verbose as the rest of the gang, but his demeanor is most convincing.

I've got to give props to the inventive set design: The illuminated panels on the backlit, chalkboard-like wall become menu items in a Chinese restaurant. After intermission, it magically transforms into a performance chart in a Chicago real estate office.

You can almost smell the desperation in the actors' characters. Especially Eric Peterson (pictured above, left) fresh from Corner Gas. Peterson makes his Soulpepper debut as a convincing Shelley "The Machine" Levine, a down-on-his-luck veteran seller who's looking for a break. He becomes smarmy and disingenuous in his dealings with his associates and his boss. It's almost too painful to watch, but you end up almost feeling sorry for the guy.

The dialogue in this Pulitzer Prize-winning play is fast and furious, keeping apace with its characters' ambition. At times, the actors seemed to lag in their timing when cutting each other off mid-sentence, their lines appearing too scripted, making me wonder if they just got too carried away in all the back-and-forth braggadocio.