The combination of trash and opera seemed different enough to intrigue me to go see the limited run production of Jerry Spinger - The Opera at the Hart House Theatre. I couldn't imagine much of a storyline was needed, if it related in any which way to the original Springer television show, therefore I wasn't expecting any quality theatre. I also didn't expect to leave before the second act ended.

Upon exiting the doors, one of the ushers mentioned that they had expected people to leave at that point due to the somewhat sacrilegious content. I explained to her that I was actually leaving as I couldn't take anymore of the immature content. This show seemed to start off slow and go downhill from there, with not much to keep my attention, much like the television show that I would have on as a background distraction while I focused on other things. Many of the characters were hard to understand, with only words like lesbian, slut or whore being audible. 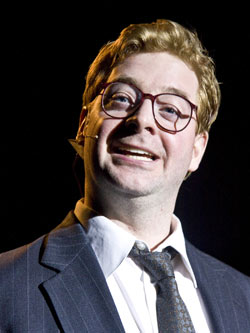 The play was split into two acts, the first being a depiction of the television show, with cracked out guests slinging insults and fists at each other. Without giving too much away, for those who have a couple of hours to kill and are wanting to see this show, the second act was more a fantasy piece with every biblical character you can think of. Jesus and Mary pair off with Satan, and God is everywhere, much like the US Presidential Inauguration. I actually noticed more yawning and expressions of boredom, than laughter or gasps of shock. The audience was quite mixed in age as well, so it wasn't as if the juvenile or TV-heads got it more than anyone else in attendance.

After a successful beginning at the Edinburgh Fringe Festival, the show went on to perform over 600 shows at London's National Theatre and it was also turned into a BBC television series for a short time. Forward to 2009, and Toronto gets its own version thanks to director Richard Ouzounian, accomplished actor and Toronto Star theatre critic. As the city may soon face the decision whether to allow "atheist" bus advertising or not, I think we have continued to advance since the Springer crusade of the 90's. Let's leave the shock value entertainment to You Tube and Hollywood celebrities, as at least there's a chance we might catch something we haven't seen before that could actually disgust us.