The Best Place to Watch a Play in Toronto

That Toronto has a vibrant theatre scene is no secret. Next to Broadway, Toronto is often suggested as next in line as the best North American city to catch the latest and greatest to hit the stage. With that in mind, we asked our readers in blogTO's recent Best of Toronto poll to name their favourite place in the city to watch a play.

Our focus here was on the local theatre scene - not big budget, international productions that play at spots like the Princess of Wales, the Royal Alexandra, the Canon, Sony Centre or the Elgin and Winter Garden. Making the cut as the top five were the Tarragon, Buddies in Bad Times, Berkeley Theatre, Young Centre, and our readers' top pick overall - the Factory Theatre.

Founded as the Factory Theatre Lab in 1970 (See Wikipedia entry here), the Factory Theatre was the first theatre in Toronto to focus its programming exclusively on Canadian productions. Inside its heritage home at Bathurst and Adelaide are two theatre spaces - the Mainstage (seating 200 plus) and the even more intimate Studio Space. Each summer it's also one of the hosts to the annual Toronto Fringe Festival.

To learn more about what makes the Factory Theatre the best place in Toronto to watch a play I recently connected with Founder and Artistic Director Ken Gass. Keep reading for the interview, including Ken's comments on Toronto Life's recent highly critical article on the state of theatre in Toronto.

Congrats on being voted the Best Place to Watch a Play in blogTO's Best of Toronto survey. What do you think makes Factory Theatre a great place to watch a play?

I think it's the blend of intimacy, perfect acoustics, comfortable viewing and yet a funky sense of being in a heritage building, which despite a few flaws and needed improvements, has a cachet that appeals to downtown Toronto audiences. As well, and perhaps even more important, it's the sense of theatre history on the walls - the fact that this theatre has been showcasing Canadian theatre hits, like the plays of George F. Walker, in this space since 1984.

What are some of your Factory Theatre highlights over the years? 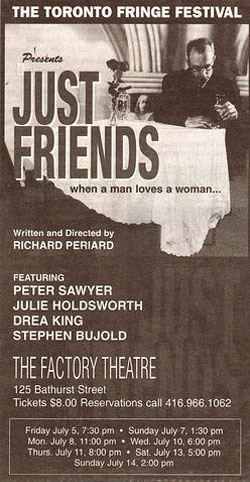 Every year has been such an adventure, and a few of them have been roller coaster rides, but the highlights always come down to the work itself. In particular, each time we premiere a new work and it finds a strong chord of audience response, the work suddenly feels most gratifying - e.g. Claudia Dey's TROUT STANLEY; Florence Gibson's BELLE, Andrew Moodie's THE REAL MCCOY and, of course, George Walker's extraordinary SUBURBAN MOTEL six-play cycle.

What were those early days like in that space above an auto-body shop on Dupont? When did you move to your current location? What used to be there?

We moved to our heritage home at Adelaide & Bathurst in 1983/84, and managed to purchase the site in 1999. The premises are a mixture of an elegant heritage house, built in 1868 and hall that was added in 1910. Doing theatre above the auto-body shop on Dupont was quite an adventure - with the sound of auto sanding grating on rehearsals, and rain often coming through the sky-lights. It was definitely very gritty, but audiences flocked there with an equal sense of adventure because of the work we were doing. However, in 1973, the City told us we couldn't have a theatre above an auto body shop!

What upcoming programming at the theatre are you most excited about?

I'm extremely excited about our upcoming production, a re-examination of George F. Walker's great play from the mid-1970s, BEYOND MOZAMBIQUE. It's a dazzling script, totally different from his East-end plays, yet wild, imaginative, highly theatrical and still, underneath the humour and darkness, a stark political resonance.

In a recent issue of Toronto Life, Alec Scott takes issue with the state of Canadian theatre calling the work "marginal at best....almost irrelevant, sitting on the sidelines of the city's current cultural renaissance". Is he off the mark?

Alex Scott (whoever he is, perhaps one of the dispirited, disgruntled people he alludes to with such authority) is so far off the mark, the article is really beneath contempt and beneath comment. In terms of the references to Factory, it is so egregiously erroneous and outrightly false, my first reaction was to launch a libel suit.

Example: He refers to our finances as being "parlous" [a pretentious word meaning perilous and risky]. Factory had a financial crisis TWELVE years ago. Since then, 9 of the 11 past seasons have ended in surpluses, including last season which posted a $151,000 surplus. We have an acrrued capital debt of over $300,000, but are sitting on a property which we bought for $1.2 million in 1999 that is now worth $2.5 - 3 million. (Our remaining mortgage is less than $700,000.)

He completely ignores our many recent hit shows, including two sell-out productions of BIGGER THAN JESUS, TROUT STANLEY and the award-winning LEISURE SOCIETY. Even more incredible, he fails to mention any of the mega-hits that Tarragon has generated, including John Mighton's HALF LIFE, which also sold out at the Bluma and is now touring Canada and the world, or their other notable hit productions of difficult plays such as Rosa Laborde's LEO and Wajdi Mouawad's SCORCHED.

Tarragon has over 4000 subscribers and Factory's audiences have been consistently solid. Yet Scott states, as apparent fact, that hardly anyone comes to our theatres any more! Nothing could be further from the truth - this is sloppily researched, deliberately distorted and malicious journalism at its worst. Toronto Life's editor, Sarah Fulford, should be disgusted with herself for this lapse of professionalism.

Of note, it is true that Theatre Passe Muraille went through a rough patch last season (as did some very notable large companies) but with the City having bought their building, the theatre community is betting that Passe Muraille will soon be back in full force. Anyone can sing sour grapes, and be a negative critic - so, go right ahead, dismiss our huge artistic successes and sing the praises of theatre in London if that's the kind of colonial toady you really are. Fair game, it comes with the territory. Just get the facts right.

How challenging is it to draw audiences to Canadian plays these days? Do you think theatre gets lost in the myriad of entertainment options available in Toronto?

In my observation, audiences love Canadian plays as much as plays from anywhere else, perhaps even more so, because of things they recognize about themselves. It is true, that mega-hits from elsewhere are easier to market because of their widespread pre-publicity.

Of course, live theatre is a niche market compared to television and other entertainment options, but the real point is that it's still a very significant market, and the ripple effect from live theatres such as the Factory, spreads into schools, libraries and our national consciousness through subsequent productions and media commentary.

Of course audiences have more choices than ever, and seem to be making shorter term commitments vis-a-vis their ticket buying habits. Still, the audience is clearly there, despite the showbiz factor that means that some shows invariably do much better than others.

Do you think local theatres focusing on Canadian plays can be successful without government funding or charitable donations?

Without government funding or charitable donations, theatres would produce less works, and would sacrifice quality to box office expediency. Without public and private support, theatres would not be able to make the same commitment to community, to educational outreach, or to the same degree of play development and artistic achievement. The same would be true for theatres producing classical work as it would be for those who produce solely Canadian plays, like the Factory.

What does the future look like for the Factory? In your interview with Toronto Life you mentioned that "all options are on the table.

Because of our solid financial position, and the high capital value of our property, it would be imprudent not to consider all options as we contemplate a major renovation over the next three years or so. So, yes, the possibility of partnering with a developer, for example, to either expand on the uses for our property, or to create a scenario where we could re-locate elsewhere would have be considered, simply as a matter of due diligence, if nothing else. My preference, and the far greater likelihood, is that we would stay where we are and continue to build on the commitment so many have made to the Factory in this excellent location.

We are currently consciously building up our fiscal strength, and I look forward to using this strength to continue to expand the scope our seasons, our outreach, and the scale of the work itself. I remain very optimistic about the future.

Finally, when you're not at the Factory where else do you like to catch a
play?

I like seeing plays at the Magnetic North Theatre Festival and at the PUSH Festival in Vancouver, and try to catch most plays--certainly the Canadian plays--at Tarragon, Passe Muraille, Buddies In Bad Times, the Theatre Centre and CanStage.