Shame [sheym]
-noun
• the painful feeling arising from the consciousness of something dishonorable, improper, ridiculous, etc., done by oneself or another: She was overcome with shame.
-verb
• to cause to feel shame; make ashamed: His cowardice shamed him.
-idiom
• for shame! you should feel ashamed!: What a thing to say to your mother! For shame!

Sketch group Shame is Right! have a new Claim to Shame, and they're letting you get a little piece of the shameless action every night through April 14th. The question remains; will you be ashamed for not shaming yourself at this shameless evening of shameful sketch, or will you be all shame shame double shame now I know your girlfriend's name after plopping the 10 bones for the show? 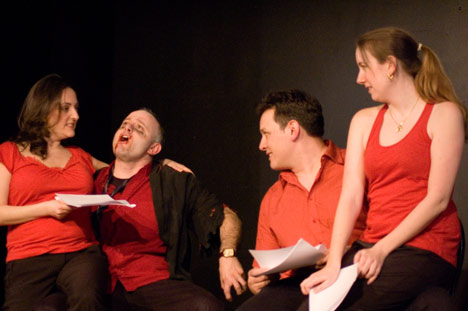 Jack let you all know about the show earlier this week, and we were all promised that Shame is Right! would attack funny. Having checked out the opening night of Claim to Shame's 4 day run yesterday, I have mostly positive things to say. Shamefully, the worst part of the show didn't even involve the troupe.

Claim to Shame is sketch show wherein the quartet of players move from skit to skit almost seamlessly through the use of a few low tech props and background music that often serve to bridge two sketches together. With only a few minor changes in costume, the show starts off quick and ends even quicker.

Some of the sketches' characters make multiple appearances throughout the night. Old Man Jones (complete with back up vocals) and the role-playing couple obsessed with acting out make-believe scenes involving soldiers and Afghani women are notable standouts. It should be noted that there are very few if any sketches lampooning specific people; the show instead shames various personalities that we've all seen in people we've met over our lives. Watching Canada and the USA defined as a sex position will likely make your head nod in agreement during a minor convulsion.

I found that the evening started off hawt, and ended really hawt, closing out with their golden Zombie Stockbroker sketch. That shit was nuts and makes for an awesome close out. In between, the group was merely really good. Had they only been "really good" the whole night, it would've still been great.

Little extras like the flight program and emergency instructions on the tables do indeed provide their share of laughs, while contributing to the bizarre sketch comedy that is later acted out on the small stage. Seemingly obvious quips like "Pack your own bags; never let a terrorist do it", and "Be aware that metal items may triggers metal detector alarms" make sure that you're entertained even before the show stars. 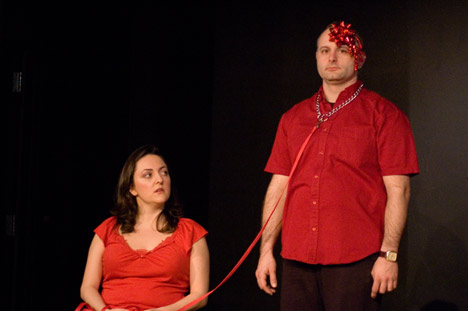 There was a downer at the opening night. This downer, however, will likely not affect the next 3 shows. There was someone seated about 3 feet away from may that sounded like a rabid hyena whenever she laughed. Normally this isn't a terrible thing, but she was laughing hysterically at things that were not even jokes. We all got our first dosage of the hyena lady when the lights dimmed. When the LIGHTS DIMMED FOR CHRIST'S SAKE! At a couple of points that players had to say their lines twice because they couldn't even hear the words come out of their mouths. Hyena lady, FOR SHAME!

Just be thankful that she likely won't be there again. If she is, I hope the stewardesses and pilots consider her a terrorist and kick her off the plane.

For what it claims to be, Shame is Right!'s Claim to Shame definitely provides an entertaining evening, with enough bang for the ten bucks to warrant putting your ass in their seats. For 10 bucks, you'll get just over an hour of shameful power. The run is short, though, so be quick about it!

For more information, call Marco Timpano at 416 947 5533 or email shameisright@gmail.com

Photography by Ry to the An Couldrey