How far can you travel in 15 minutes on the TTC?

Mapnificent is a new interactive map tool that illustrates how far one can travel in a set amount of time on public transportation. The work of developer Stefan Wehrmeyer, the application uses scheduling data from transit agencies to determine approximate travel times, which are then plotted out on a Google Map. Available in over 50 cities in the world including Toronto, it's fascinating to compare the degree to which different locales in the city are serviced by the TTC. While there may not be any real surprises to be found, measuring trip-times in this manner has loads of potential for determining how to improve transit infrastructure in the future. 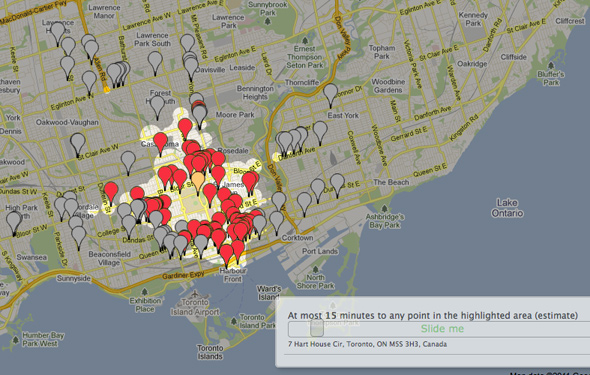 It gets better. On top of providing users with a spatial representation of their travel range, Mapnificent taps into Google's business listings to show what can be found within a given search area. In other words, if I have an hour-long lunch and thus want to know what dining or shopping options are available to me within a 15 minute (or less) transit trip, the app will plot out the various options returned via a keyword search (e.g. "coffee" or "Italian restaurant"). And, if you have more travel time to spare, all you need to do is slide the trip-time scale to reflect that (its most effective range is between 10 minutes and a half and hour).

For all these positive attributes, there are a couple problems to be aware of. As Steve Munro notes on his blog, there doesn't appear to be any trip-time allotted to the wait period that once generally faces before boarding a vehicle. I would guess that this is absent because it's too difficult to measure with any certainty, but it's important to take this into consideration when using the map, especially if traveling by bus in a low-service area.

Despite this shortcoming â which may be addressed at some point â Mapnificent makes for a very useful addition to trip-planner apps, and should come in major handy when trying to determine just what kind of public transit service is offered in a given area that one is considering moving to. Check out the video below to see other useful applications.

Unsurprisingly, one's 15-minute travel range is huge when departing from Yonge and Bloor 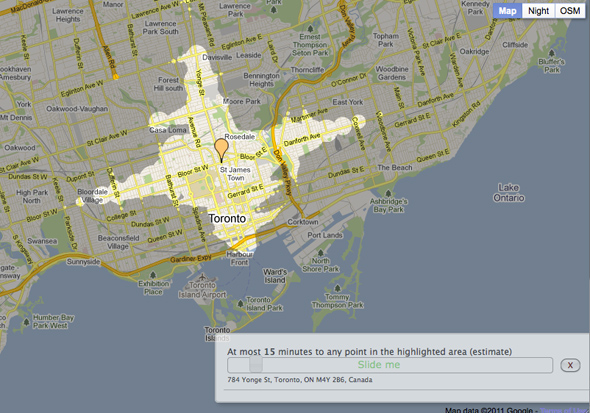 But not so much when at the Don Valley Brick Works 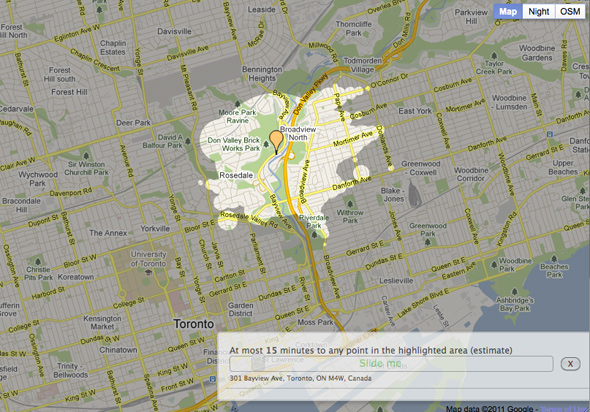 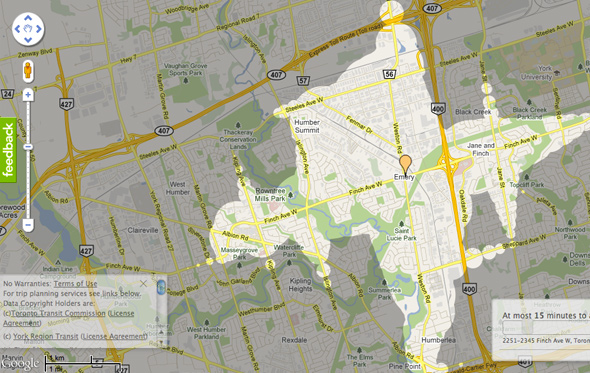 Mapnificent from Stefan Wehrmeyer on Vimeo.