When I walked into Toronto-based startup InteraXon's offices I felt like it was something out of Star Wars. The technology company, located in a second floor office at Queen and John, doesn't accent their space with potted plants and water coolers. Instead, their office is centred around chairs hooked up with wires and headsets, and a giant screen for measuring your brainwaves. Yes, InteraXon does something unique - thought-controlled computing.

Led by pint-sized powerhouse entrepreneurAriel Garten, IneraXon is trying to bring this seemingly space-age technology into the mainstream. They've spearheaded installations for the Ontario Science Centre, and even helped tourists at the 2010 Vancouver Olympic Games experience Ontario attractions - allowing them to speed up the lights on the CN Tower or affect the flow of water in Niagara Falls using solely their brain waves. And with names like "Levitating Chair," you can't help but feel like their projects would be the hit of the party.

I had the chance to try out the technology on a very basic level - they hooked me up to a headset and as I either focused or relaxed (or tried to), a coloured bar on the screen would gravitate to one side or the other. Clearly my journalism background left my mouth gaping open at the technology, so CEO Ariel was more than happy to explain it to me - after all she's used to getting double takes when she tells people what her company does. I talked to the multi-talented entrepreneur to find out how she went from organizing student fashion shows to leading a thought-controlled computing company.

What is your background?

My background is a combo of art and science (neuroscience) with an apparent knack for business - I've always drawn from both disciplines, spending time creating, learning and expanding (I hope) the boundaries of both. As a designer I did technology based art installations, intricately choreographed fashion shows with modern dancers and made shirts with your brainwaves on them. As a scientist I've waxed poetic while cataloging neurons in rat brain slices. Thought controlled computing is a magnificent mix of art, intimate personal engagement, hard-core neuroscience and big business savvy.

How did you first learn about thought-controlled computing, and why were you interested?

I began thinking about the relationship between brainwaves and the things we can do with them about 8 years ago, initially by contemplating the interactions between brainwaves and music waves. I began working with thought controlled computing technology in 2003 along with James Fung in the lab of Steve Mann, who was a pioneer in that technology. He'd invented the system we were working with in his early days at MIT.

Why did you decide to start InteraXon, and how did you get the rights to use the technology?

After putting aside the technology for some time, it kept nagging at me that "the world has to know about this." I approached Steve and he granted a licence for the initial technology. I also joined forces with Chris Aimone, the most brilliant multi-dimensional engineer you'll ever have the pleasure of working alongside, and Trevor Coleman, who brought his innate entrepreneurial good sense to the table. Like every start-up, we spent alot of time together late at night in each other's living rooms imagining what the technology could be. We hit gold and it took off, so now we do that same dreaming, but from our desks in our lovely offices at Queen and John. And we have a team of researchers, designers and engineers to execute those dreams on the drop of a hat. 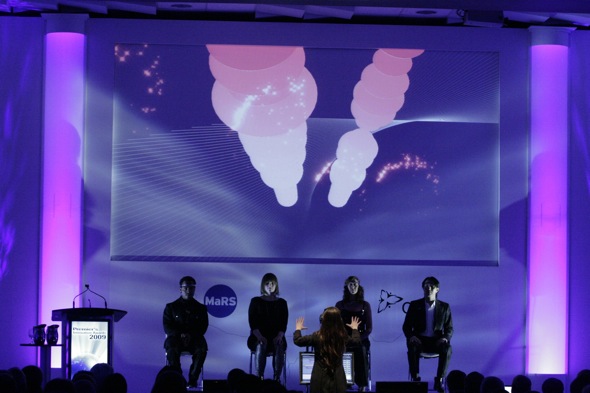 Can you explain what your technology does?

There's a simple sensor that reads your brainwaves. Every time you think, or do anything mental, your neurons fire electrical impulses back and forth to communicate. This electrical activity can be read outside the head. Some of these electrical patterns are very stable and reproducible, and those are the brainwave signals you can use as control signals. For example, when you focus on something, your beta waves increase. When you relax your alpha waves increase. So these two signals make great initial control signals.

Can you give me an example of the work you're doing with brands?

We work to help companies integrate thought controlled computing into their products and businesses, and are currently engaging with clients like Deutche Telecom, big players in aerospace, and production companies.

How much does it cost to implement this technology for a brand?

It depends on the project.

Are there any risks for a consumer using this technology?

The technology is completely safe. There is a sensor on your head that is basically a piece of metal that picks up the electrical activity that comes off your head (basically like putting a penny up to your forehead).

You've worn many hats: real estate entrepreneur, fashion designer, and psychotherapist. What are people's reactions when you now tell them you're in the thought-controlled computing business?

I have to laugh at that question, because having bumped into many people from high school recently who are keeping up with my various endeavors, there's a common look on their face, that's both surprised, but expectant that of course I'm doing something totally new and totally crazy. You have to remember that even in high school I worked in a genetics lab and designed the annual student fashion show, probably with some conceptual intellectual bent in the clothes.

What is the focus for InteraXon moving forward?

We've created an iphone ready headset and mobile apps that we've been working with. Thought controlled computing is how we will ultimately be engaging with the world on a daily basis - answering our phones, directing elements of our household and having our computers conform to our needs. Taking the platform mobile is the next step in the natural adoption of the technology.