Collective buying sites battle for the attention and wallets of Torontonians

By now you've probably used an online coupon, or even a mobile coupon using new startups like Clip Mobile. The downside to a coupon is it's usually only a small discount - maybe 75 cents off a box of cereal, or buy-one get-one-free sandwiches. Not exactly mind-blowing.

But what if you could get deep discounts (think 50-90% off the regular price) on things like tickets to sporting events and dinners at local restaurants? Now it's suddenly worth your attention. Enter the new wave of collective buying sites that are taking Toronto, and the global marketplace, by storm.

Collective buying sites are based on the premise that retailers can offer a deeper discount on goods and services if a larger group of people commit to purchasing a deal. It's leveraging the old adage of 'there's power in numbers' to give consumers a great offer, and retailers exposure to new audiences. For a deal to become active a certain number of users have to commit to it - if the number isn't reached in the limited time frame no one gets the deal.

We first wrote about collective buying sites last month when we profiled local startup TeamBuy. But they're only one of many new companies, both Toronto-based and from around North America, that are trying to enter the lucrative new collective buying space. They include local sites like the recently-launched WagJag and WebPiggy, and a host of U.S. and international-based sites like SocialBuy, LivingSocial, Groop Swoop... the list goes on.

The biggest of the bunch is Chicago-based Groupon (group coupon - smart right?), which launched in 2008 and now has over 200 employees. They put the lucrative in collective buying - it was announced on Tuesday that the company has a valuation of $1.2 billion (yes, that's billion with a B) and is expecting revenue in excess of $100 million in 2010. Groupon launched in 2008, has been expanding like crazy across North America, and has sold over 3 million 'groupons' to date. It's launching soon in Toronto - well at least that's what their website says. I signed up on February 18th and still haven't heard a word. They definitely have the advertising dollars to back them up though - if you've been on Facebook or on any number of Toronto-based websites you've probably seen one of their ads. 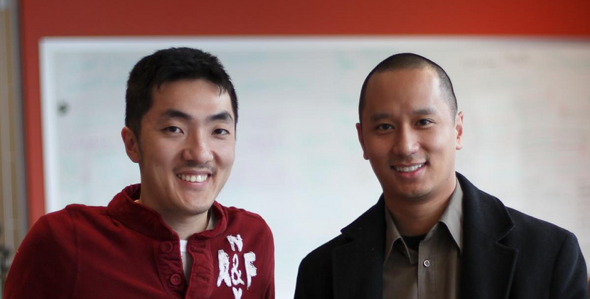 Local entrepreneurs Chris Nguyen and Lee Liu (formerly of Dragon's Den and JobLoft.com fame) launched social buying site TeamSave.com last week, and are banking on the power of social media to propel their growth. After all, if you want a deal badly enough you'll appeal to your friends via Twitter, Facebook, and any number of other social media sites. They're also offering you $5 if you refer a friend. 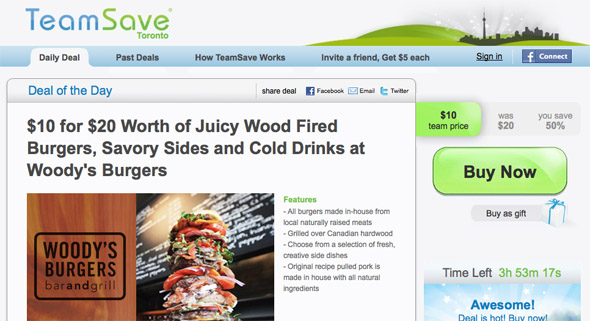 These social buying sites aren't without criticism. In the comments on our post last month TeamBuy users complained that they received unwanted e-mail from companies after purchasing a deal, and that TeamBuy was inflating the number of users who bought a deal. TeamBuy maintains they don't sell e-mails to companies involved in the offers, and that the number disparity was due to a technical glitch. Users also have to be careful to check out any expiration dates and stipulations specific to each offer to avoid running into problems when redeeming deals.

There's also the question of what's in it for retailers. After all, they're offering products and services at a deeply discounted price, and have to hand over some of the profits (30-50%) to the third-party sites. But, on the other hand, they're getting exposure to a new audience, and guaranteed customers - something traditional advertising can't promise. One company that used Groupon set a minimum of 75 for the deal and ended up selling over 750.

I talked to Arshad Marali, the owner of Liberty Noodle who has run deals with TeamBuy and TeamSave. "We've seen a bunch of customers come in and use the coupon," he says, "and the lion's share have been customers who have never tried our restaurant." Though it's too early to tell if they'll become repeat customers he says he'd definitely do a deal again - and has no preference for either company. TeamBuy user Joshua Lenon says that he becomes a repeat customer if the deal is right. "My friend and I see group buying as a way to try new places without a lot of risk. We try new restaurants, gyms, and services," he says, and "the ones that 'wow' us get added to our list of favorites. We go back quite often."

So which company will come out on top in Toronto? The one you choose to buy with really depends on the deal being offered - which relies on the company's ability to attract the hottest local businesses. But there's no doubt that collective buying is taking off - while writing this article I got a direct message on Twitter asking me if I've checked out TeamSave and their latest deal. I know I'll try to support local companies as much as possible - but I won't be able to turn down an amazing Groupon every once in a while.