The Toronto Maple Leafs' fan base is arguably the most devoted, loyal and passionate community in sports. Big companies pay millions of dollars to try to find the right advertisements and "viral videos" that attempt to cultivate such a community, but as Leafs fans know, you're usually born with it.

I've been a Leafs fan my entire life, so I was intrigued to find out that Maple Leaf Sports and Entertainment (MSLE) hired a new social media guy, Jonathan Sinden, to represent the Leafs, Toronto Raptors and Toronto FC in September of 2009. His official title is Producer, Social Media but he's better known around the Air Canada Centre as "Jonny Social," and he's leading the Leafs into a new era of fan interaction.

Jonathan was hired with one main goal in mind: to excite every fan. He's done this in a variety of ways during his six months on the job -- by responding to customer service questions and complaints, answering fan experience questions, engaging on social networks during and between games, and most recently by communicating the details of the trades that brought players Dion Phaneuf and Jean-Sebastien Giguere to the team. 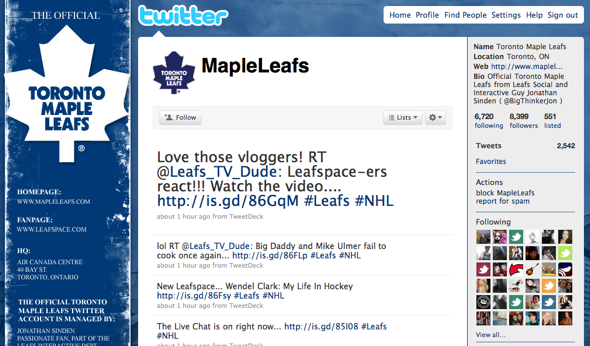 There's never been a lack of online activity from Leafs fans - it's the official team presence that's a new addition. Since Sinden joined the team their online presence has increased dramatically. The official @MapleLeafs Twitter account has gone from 0 to over 8,400 followers while the official Facebook fan page has shot up from just over 15,000 fans to 52,000 fans. The Leafs fan site Leafspace.com has also grown from 30,000 to 45,000 members.

And instead of taking the typical corporate approach and just broadcasting one-way updates, Sinden truly interacts with the fan base. He has "regulars" that he recognizes on the Twitter stream, including a fan in Dallas who awaits the Leafs' one annual visit there with bated breath. He updates the Facebook fan page often, and gets upwards of 50 comments on each post (not to mention the countless wall posts from fans).

As anyone in Toronto knows the Leafs are notorious for having an abundance of fans, but a lack of playoff appearances of late. So how does Sinden keep the community positive when the team suffers a crushing loss, like last weekend's 4-3 third period meltdown to the Devils? "Remember, I am a fan first and I totally get the the highs and the lows of being a fan," he told me. "Sure, a string of losses is frustrating, but I'm with the team during these lows and I'm with the team during the highs." Fans recognize Sinden's passion for the team, and seem to really appreciate the team's engagement. One longtime fan told him on Twitter, "I've followed the Maple Leafs for 35 years and it's about time you followed me back."

Even the big man himself, Leafs President and GM Brian Burke, is on board with the team's social media efforts. Sinden tells me that Burke encouraged him to reach out to bloggers and online personalities in the community and even bring them to games.

Sinden has big plans for 2010, including crowdsourcing ideas from social media sites, holding more fan contests and leveraging new tools like Foursquare (will the Mayor of the ACC be rewarded with free tickets?). And while an increased social media presence and a higher level of interaction with fans doesn't seem to be solving the Leafs' on-ice woes (they're currently last place in their division), keeping the spirit of Leafs Nation alive and well is something every fan can get on board with.