The great thing about tech geeks (myself included) is that they can turn almost any mainstream activity into an excuse to geek out. If they host a party at a bar like HoHoTO they submit song requests via Twitter, and have a livestream of Tweets projected onto the wall. If they meet for lunch they have a special hashtag, #geeklunch. So when Social Media Week came to town February 1-5th it was a chance to get even more creative with the events. Many were held with traditional formats like lectures, panels, and discussions. But when it came time for the closing event, Toronto got a taste of a brand-new event: PowerPoint Karaoke.

Now when you think karaoke you probably picture audience members warbling Celine Dion ballads, or groups of tipsy frat boys belting out Journey. But this is a very different kind of karaoke - there's no music, no tele-prompter, and drinks are practically a requirement. PowerPoint Karaoke involves people who get on stage to present a slide deck they've never seen before . If you have a fear of public speaking then you're probably shaking in your boots just thinking about it - I know I wouldn't have the guts to do it.

This improv take on a boardroom classic began in Berlin in 2006, and has spread to cities around the world including Boston, Amsterdam and NYC. Intent on putting their own tech spin on the classic cheesy bar activity, Toronto organizers Jay Goldman and Tom Purves brought the event to the city for the first time on Friday night. Eight brave souls in the Toronto tech community got up in front of a sold-out crowd at The Drake Hotel to present, well, they had no idea what. Pre-selected topics included the social media-focused ("What to do when someone on the Internet is wrong" and "How to succeed at social media without really trying") and the inevitably humorous (robots, hipsters). 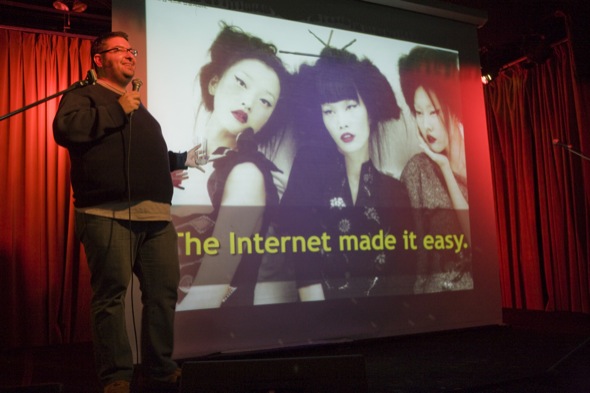 The format was simple - each presenter had 5 minutes, and slides advanced automatically after 20 seconds. After that it was a mix of concocting stories, reacting to ridiculous images on slides, and making the audience keel over with laughter. After two heats, a round of finals, and a tie from the judging panel the audience finally crowned Misha Glouberman as the night's champion (his first presentation on grammar got the most laughs of the evening). 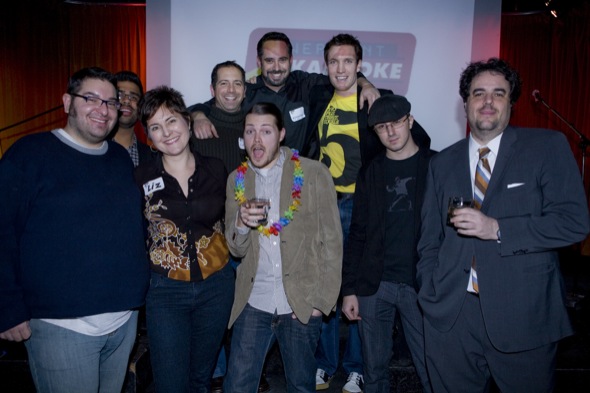 The night also brought up relevant questions such as why Skynet robots have perfect teeth (they're robots! What do they need teeth for?) and what to do if you encounter a French hipster (answer: walk away. They're way out of your league). The resounding success of the first event means an inevitable return - so if you think you have the skills to wow the crowd at the next PowerPoint Karaoke, get in touch with one of the organizers. And remember: the stage is yours - the slides are not. 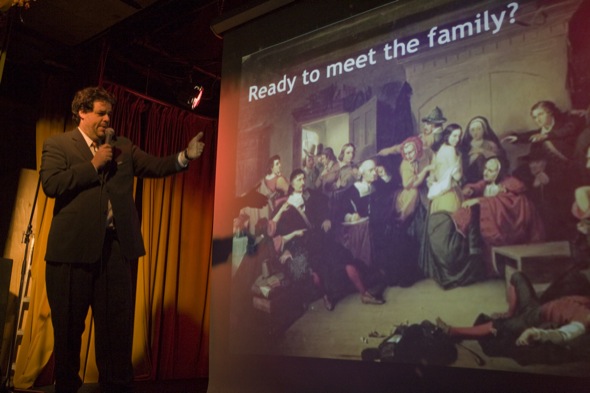