The company behind Condo Guide magazine has just launched HomeTrader.ca, a new web site (still in beta) that becomes the latest in a long line of online efforts to try to help us find a home to buy, sell or rent in the Toronto area.

In the wake of the massive failure that is Realtor.ca (280 angry comments and counting), the market is still wide open for competitive offerings. But after giving HomeTrader a bit of a spin my initial take is that its shortcomings are consistent with what's plagued so many of the other sites - a lack of comprehensive data and bad usability.

For me, the number one feature that I'm looking for in a real estate site is a useful map interface that let's me easily scope and sort available real estate or rentals in different parts of the city. If I'm interested in The Beaches, I want to see at a glance what's available there and then be able to sort by price, features and maybe some other variables.

HomeTrader seems to get this and goes heavy on the map interface. But why have they gone with a custom version of Microsoft Virtual Earth rather than use a more user-friendly version from Yahoo! or Google? The zoom feature is wonky which means I can't easily narrow in on a specific few blocks or neighbourhood, and am instead initially subjected to a way too large grid system. One box seems to cover most of Toronto and parts of Mississauga. So much for zeroing in on Leaside or The Annex. 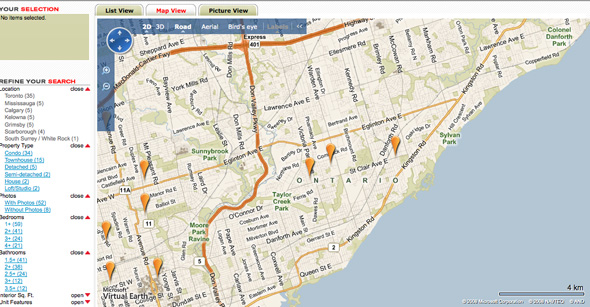 But beyond the map issues, the major failure here will ultimately be the data. When you find a place the info can be quite good. There are often lots of photos, floor plans and other useful info. But most of the listings here are condos and townhomes which means it's not a good source to find interesting re-sale homes, authentic lofts or other non-cookie-cutter places. There's also, frankly, a complete lack of listings in certain areas. Take a look at the screenshot above of what HomeTrader is able to find east of the DVP.

Beta or not, that's simply not good enough to make this a useful real estate source.