Ever since downloading the Red Rocket iPhone application - a highly commendable effort at producing an unofficial (not TTC-endorsed), personal transit planner - I've been rigorously testing its accuracy. I've quickly learned that (depending on the route) it's either quite reliable, or (by no fault of its own) it's about as useful as that guy who repeatedly walks out onto the street and looks down the road to see if the bus is coming.

Out in the suburbs, it's performed really well. On both occasions that I used it to take the 112 West Mall bus to Kipling station, the bus pulled up within 2 to 3 minutes of the time predicted by the app.

But this weekend, my trials with the Dufferin bus proved to be quite different - the times relayed by the app weren't reflective of the reality on the road whatsoever. Predicted streetcar departure times on main routes on Friday evening rush hour also seemed kind of pointless when 8 minutes behind schedule, two streetcars arrived in tandem (a common scenario for most TTC streetcar users).

Ultimately, the app can only be as good as the TTC is at being on schedule. With that in mind, here are some usage tips to help make using the Red Rocket app a little more reliable. 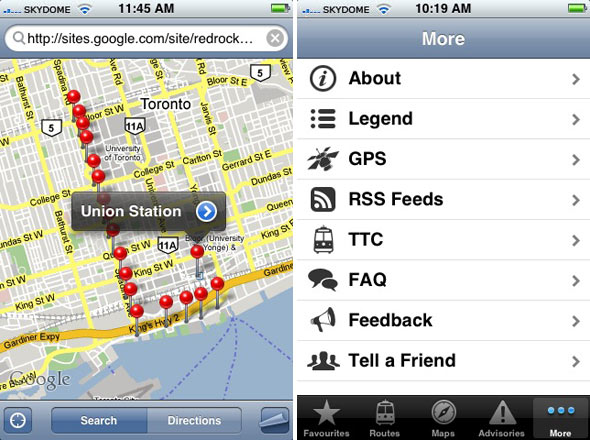 - Since the app uses fixed schedule data (not live GPS monitoring) stored on your iPhone, when service changes are made by the TTC, you'll have to watch for updates to become available for the iPhone app. Be sure that you update the app whenever the developers relay changes to routes and schedules. For example, the TTC is making a number of service changes on November 23rd, which will undoubtedly affect a significant amount of route data in Red Rocket. Should users be anticipating an update for the app on November 23rd? The next day? We'll see.

- Be more than a couple of minutes ahead of the predicted time. When the bus is running just a touch early (and they do!), you'll miss it and be in a worse predicament than if you'd simply headed to the stop at random. When the app reads 14mins to next bus, it may actually be 2mins until the next bus!

- On particularly busy routes, during peak traffic, and during nasty, snowy weather don't rely too heavily on scheduled times. Use Red Rocket, but take next trip times with a grain of salt, because shit happens often enough.

What's great about the app is that, despite the drawbacks, people really like it. This may be a testament to its accuracy, but to a certain extent its accuracy is almost a moot point because access to public transit schedule info, while on the go, is what we've been wanting for a long time. Without a doubt, the Red Rocket app will prove to be really useful utility for tourists or people new to the city.

If all goes as planned, however, all of this won't matter much. When the TTC gets with the times and produces its own GPS-integrated online trip planner and mobile application, we'll be able to get real-time reports on TTC vehicle status. A little birdie at the TTC told me that this is in the pipeline for 2009. Let's just hope that they hire the best people for the development gig, and look to riders for researching what it is that we need and want most. Until then, I'll have to alternate between watching the guy pop out onto the road to look down the street, and staring at the countdown timer eclipsing on my iPhone.