Cars, buses, subways, the city has many options for transportation to keep you warm and dry during its winters. However, a Toronto man has decided to explore the snowy streets in a much more unconventional way.

Bill Stoppard straps rollerblades to his feet and hits the roads, in rain, shine or snow. His YouTube and Instagram videos have gained him hundreds of thousands of views from people all over the country.

Rollerblades, also referred to as inline skates, feature a single line of two to five wheels. They became extremely popular in the late 80s and 90s and that's exactly when Stoppard took up the sport.

"I started inline skating in the early nineties but I don’t think I became obsessed until 1994. The people I only ever saw in my nightlife, at clubs and restaurants, were outside exercising, or just socializing on blades, in the daylight." 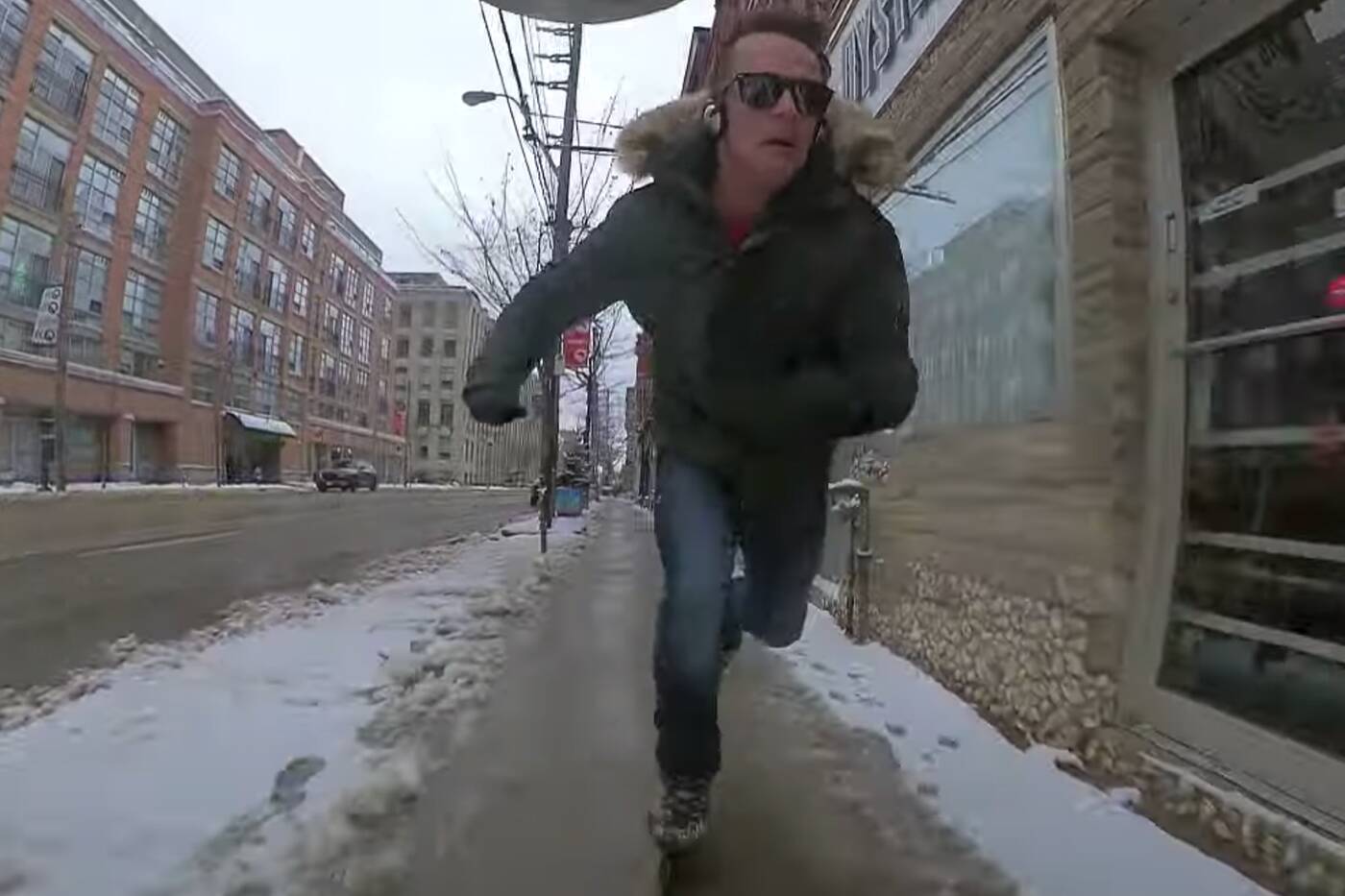 While rollerblading is not nearly as popular as it used to be, you can still frequently see people enjoying the activity along Toronto's waterfront.

What makes Stoppard's videos so unique, is that he skates through crowded downtown streets, in all types of weather. This type of inline skating is known as city skating.

Stoppard says his introduction to city skating was extremely accidental. It happened in under five minutes when he and his friend decided to test out their skates in some alleyways.

"It was easier than I imagined to time my strides in order to miss potholes and cracks. We probably looked like clods but I felt like a superhero after that session. With our new mobility we started to explore allies and streets looking for things like speed bumps, benches, and stairs to roll or jump."

Since then he's been hitting Toronto's streets, finding new paths and areas to explore. Although he says it's nice to skate in good weather, the rain and snow don't stop him.

"I skate a lot at this time of year anticipating 'the end of it all.' When it is wet or a little icy, I reduce the intensity and length of strides and crossovers so I don’t slide out."

According to him, some hardcore skaters prefer training on wet roads since it gives them the opportunity to explore their edges and turns with less friction. 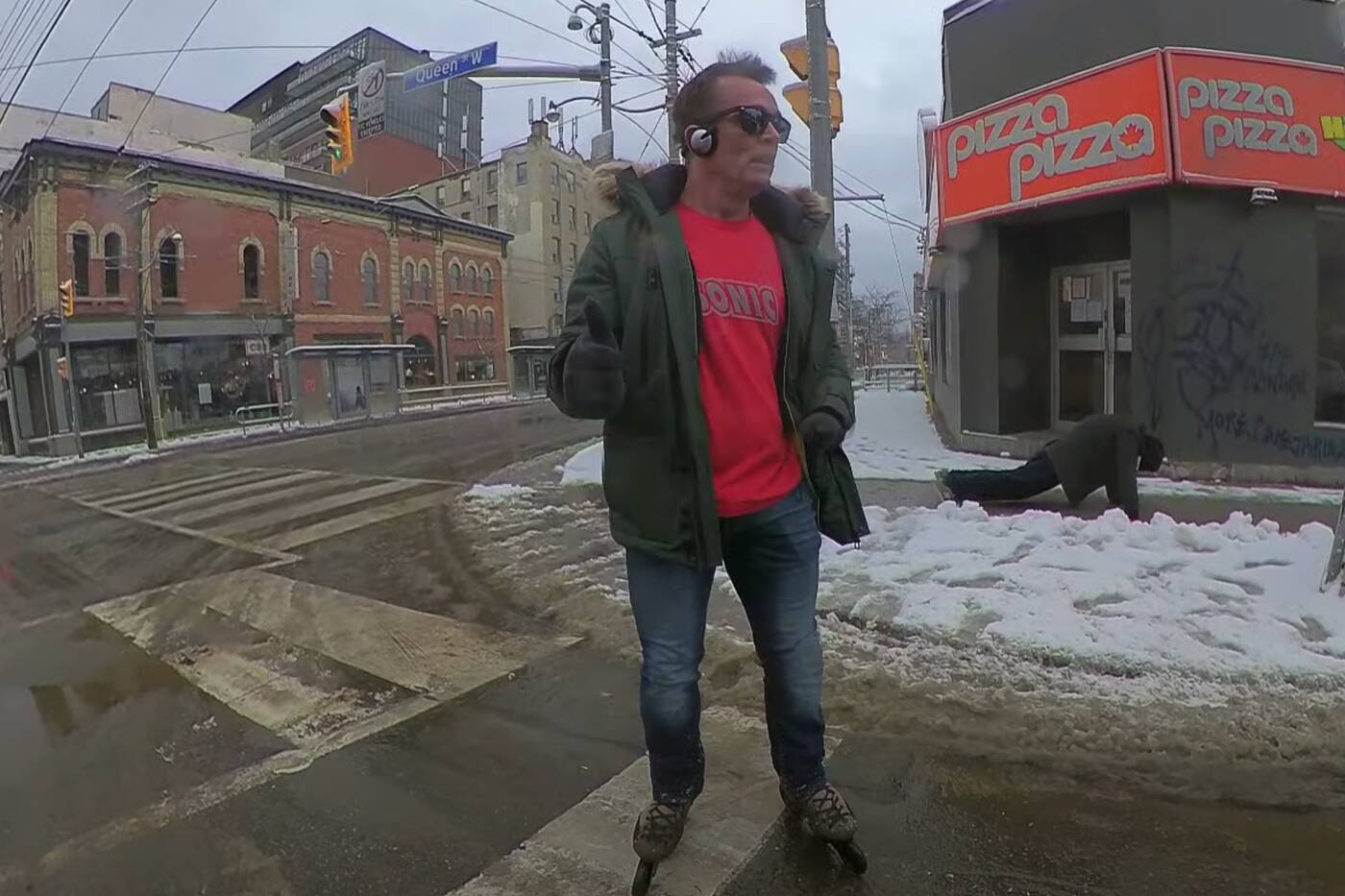 He tells blogTO that Queen Street and King Street West are his favourite areas to skate.

"I’m still finding new hidden corridors, passageways and obstacles after skating here obsessively for the last four years. The financial district is beautifully dense with stairs to roll, big drops, and things to jump, but the security guards are very fast to come out and end the fun."

After many years of skating in the area, Stoppard says he's realized that the buildings' security teams communicate with each other. "It seems like if one has seen you, they all have." But this hasn't stopped him yet, he says it's a little bit creepy but makes it a little more fun.

Of course, with such a sport comes inherent risk. He admits that he crashes a lot when learning new tricks, but luckily it's usually away from traffic. 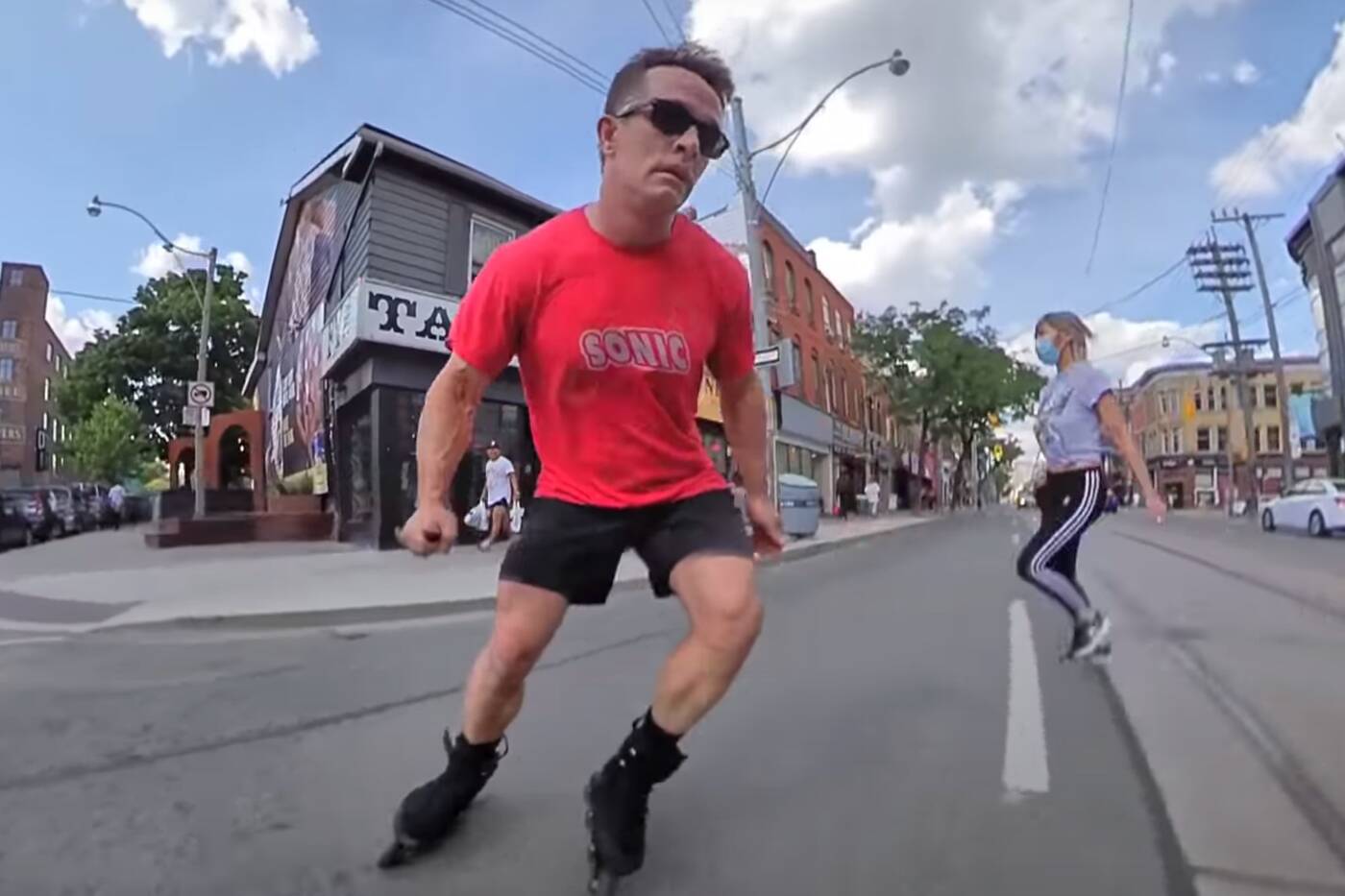 In the summer Bill Stoppard rollerblades with much fewer layers.

"I once did a chest dive at a respectable speed on King Street West. My wheel got caught in a tarred up crack and I went down instantly. For that I got cut up hands and diabolical road rash. It felt like such a stupid, voluntary fail."

On another occasion, he was doored by a car that failed to check for people as they opened their door. "The dooring was harsher than the chest dive, and took a few months to get my impacted arm and shoulder back to normal."

Despite the setbacks, Stoppard has continued to progress in his skating, and began filming videos of the process. His YouTube channel features videos of him zooming down Toronto's streets, dodging people, cars and obstacles.

"I was quite shocked that my very first inline skating video was so well received by the inline skating community, and now has half a million views. As a skater who is a mix of disciplines and not a specialist at anything, I did initially expect an avalanche of criticism about my bastardized techniques."

But instead of criticism, his videos received a lot of encouragement, which he called heart-warming. This has led him to make friends in all the niches of inline skating, and become a large part of the community.

Despite his growing success, Stoppard wants to see more people watching his videos and trying it out for themselves. "I believe billions of people should be skating," he said. "Skating is so trippy and satisfying, it’s surprising that it's not really trending."

Moving forward, Stoppard says that he would like to shoot more videos, and feature skaters from the beginner to pro level. He also wants to take his channel on the road and cover more cities through the inline lens.

His sponsor, ProSkaters Place, encourages him to create edgy and unique videos and that is what he intends to do. His goal is to expose the power of rollerblading by telling inspirational stories about people's own experiences with the sport.

For anyone looking to try city skating or just skating in general, his number one tip is to stay low because that's where the power, agility, safety and speed is.