This is what opening day was like at the Rogers Cup

The Aviva Centre was a flurry of activity on Monday, the first official day of the 2016 Rogers Cup. Milos Raonic was all over the place, from the practice courts to the main stadium for the ceremonial first serve, Grigor Dimitrov and Stan Wawrinka celebrated an epic doubles victory, and Canadian star in the making Denis Shapovalov prepared for his very first Masters event.

To a great degree, the early days of a tennis tournament offer the best fan experience. With the draw still full, the number of players on the grounds is at its peak, and the ability to get up close and personal with some of the world's best is virtually unparalleled in popular pro sports. It's also the cheapest time to watch high caliber tennis. 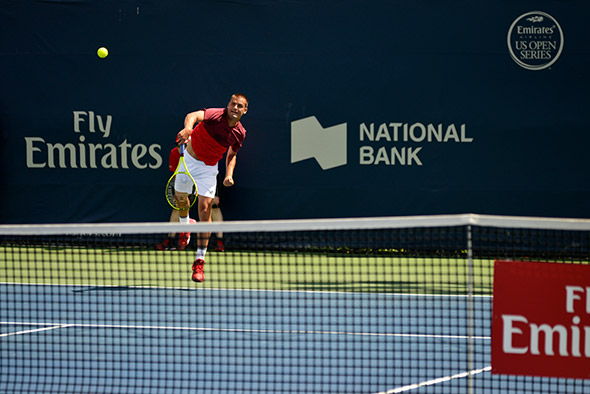 With the air thick and the sun beating down, the (covered) sky patio was a popular place to be on opening day. It hovers above both the court 1 and the practice area, each of which played host to an impressive roster of players including Raonic, Nick Kyrgios, Djokovic-slayer Sam Querrey, Ken Nishikori, and many of the other top guns at the tournament. 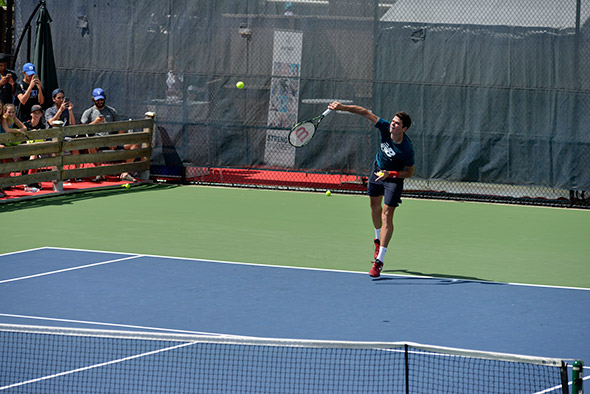 Depending on your interest level in the game, watching the pros practice up close can be both fascinating and educational. It's hard to get a sense of just how fast Raonic hits a serve until you're positioned near court level and it rockets past you at more than 200 kph. Ditto for the amount of spin the best players put on the ball, which is almost incomprehensible. 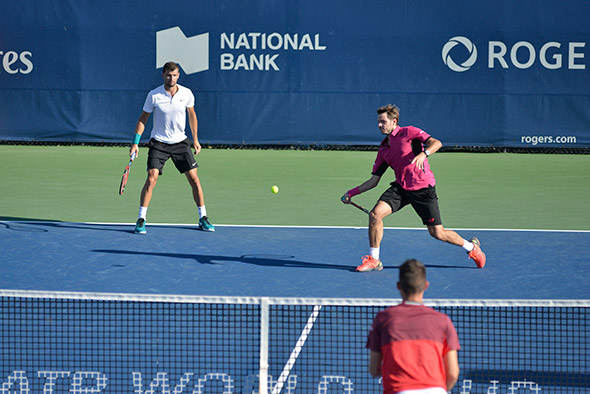 Those who aren't transfixed by the task of trying to figure out whether Wawrinka uses an Eastern or modified Continental backhand grip can still get a kick out of the less technical things like autograph sessions and the banter that you can listen in on between coaches and players. 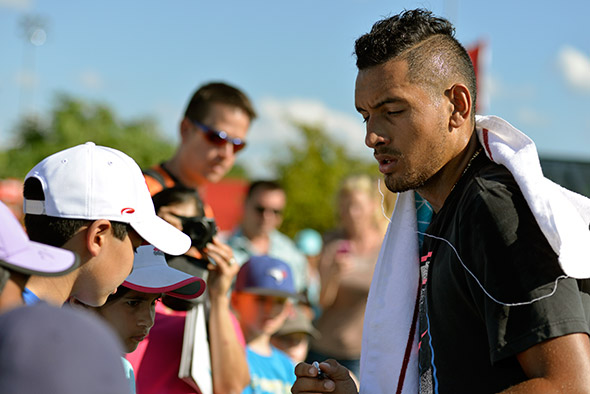 As much as centre court is the heart of the tournament, during the day session in particular, it's the grounds where all the action is. Aside from the grandstand and practice courts, which are typically occupied by matches and warm up sessions, there's tons of tennis-themed activities on site, including a radar cage to test the speed on your serve (115 kph for me, only a hundred less than Milos). 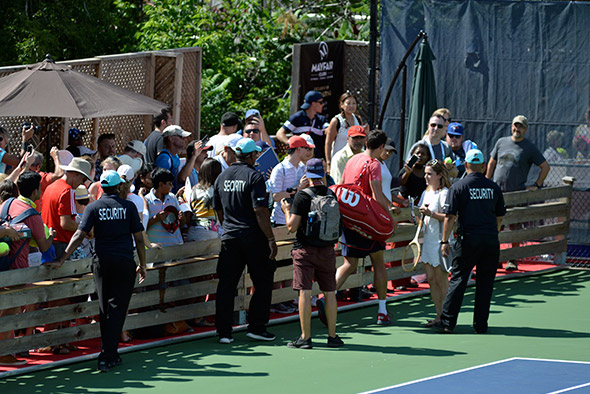 When the day session wraps up at around 5 p.m., the Aviva Centre swells with fans coming to check out the grounds before the night matches start on centre court. Much of this involves camping out at one of the many patios on site before filing into the stadium. With the sun lower in the sky, the first bit of relief from the oppressive heat greets the crowds assembled here. 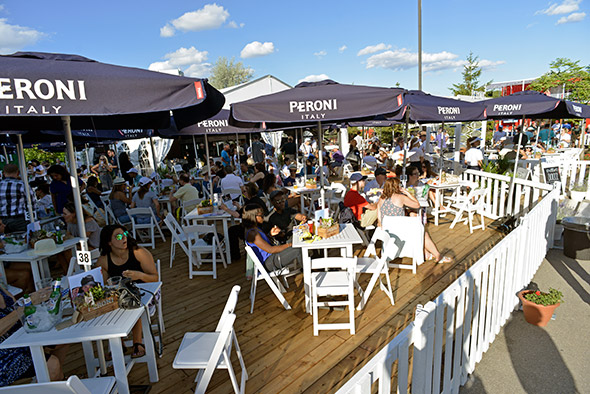 You don't always get marquee matches on night one of a tournament, but with Canadian teen Denis Shapovalov facing off against the controversial Kyrgios, there's a buzz on the grounds leading up to the match. Shapovalov is coming off a junior win at Wimbledon and eager to make a mark in the pro game. 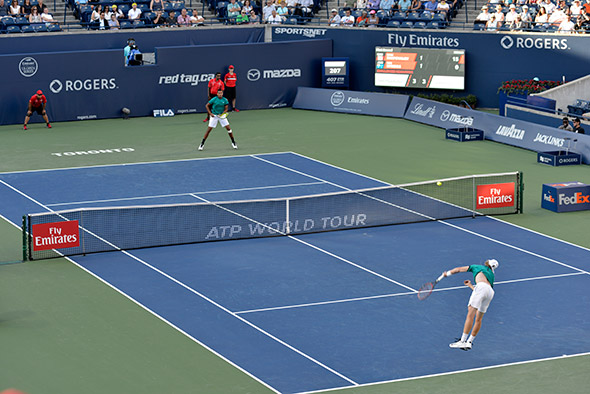 It's a gorgeous night for tennis once play gets underway. Shapovalov holds serve to start the match, which clearly bolsters his confidence (subtle fist pumps are easily spotted from the stands) and carries him through to a first set win. 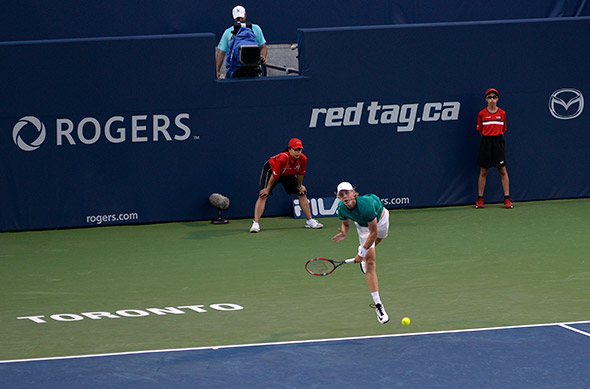 Kyrgios is only half in the match, producing an amazing shot every 10 tries mixed in with a host of duds and some half-hearted defence. He relies on his serve to hang around in the match and take the second set, yapping to his box most of the way through the first hour of play. At one point, it sounds like he announces "I'm going home!" after a fruitless winner attempt. 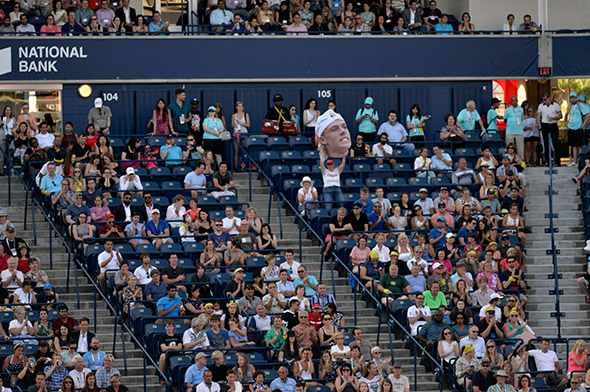 The crowd gets noticeably louder as Shapovalov breaks Kyrgios early in the third and deciding set. He goes up 3 love before almost being broken while trying to finish out the match, but ultimately pulls through and upsets the 11th seed for his first Masters win. The home crowd goes nuts as the signs start to point to a new star rising in Canadian tennis. 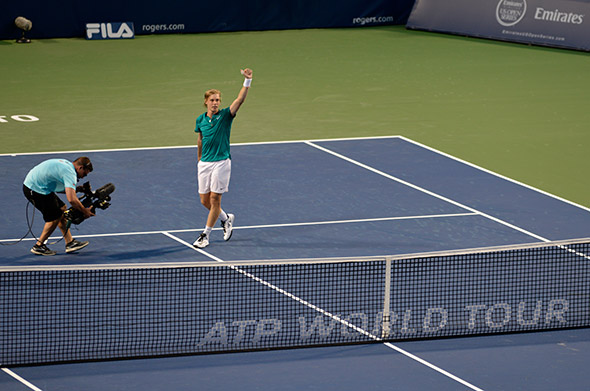 Djokovic and Raonic don't start their respective runs at the Rogers Cup until Wednesday, but despite the absence of these huge stars on centre court for opening day, the tournament started with one hell of a bang.