The top 20 street festivals in Toronto for summer 2015

Street festivals in Toronto are the perfect excuses to get out and explore the city's neighbourhoods one block at a time. Offering up everything from midway rides to community celebrations, all of these street events are as unique as the neighbourhoods they take place in. Whether you're looking to experiment with new cuisine or see local artists perform, there's a street fest out there for you.

Here are my picks for the top street festivals in Toronto this summer.

Taste of Asia (June 27-28)
If you can't get enough of summer food fests, here's one to add to your list. This event will feature 150 Vendors serving up mouthwatering Asian fare. Also on tap: a hot sauce competition, photo booth and bumper soccer.

PS Kensington (June 28th, July 26th, August 30th, September 27th, and October 25th)
Head to Kensington Market for Pedestrian Sundays throughout the summer (happening the last Sunday of the month from May to October). You'll find a host of street performers, food on sticks, and the Kensington's Art Fair, which has returned for a second year.

Corso Italia Mercato (July 3-4)
This street fest is a celebration of Italian culture that shuts down St. Clair between Westmount and Lansdowne. Expect to find buskers, art, shopping, live music and, of course, food vendors serving up your favourite Italian comfort foods.

Taste of Lawrence (July 3-5)
The Taste of Lawrence is a three-day food and cultural fest in Scarborough. It showcases foods from a number of different cultures. There will also be midway rides and live music, as well as dancing in the streets and fun for kids 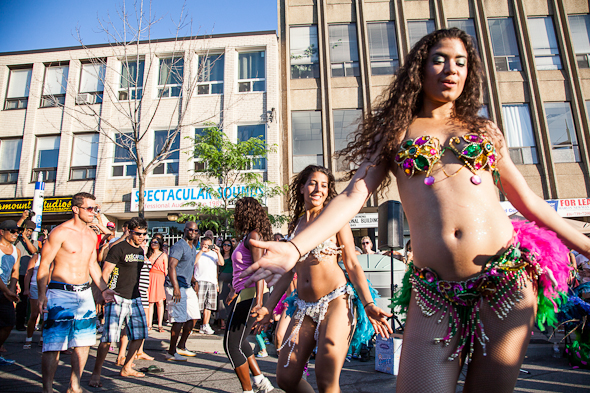 Salsa on St. Clair (July 4-5)
Salsa on St. Clair is probably one of the festivals most fraught with steamy summer possibilities. Put on your dancing shoes and get to know the St. Clair community through dance. There will also be Latin food vendors on the street, in case you need an energy boost.

Franco-FĂŞte (July 10-24)
Franco-Fete is an opportunity for Toronto's French-speaking people to get together and share their cultures, and teach others about them, too. The festival, at Yonge-Dundas Square, will focus on French music.

Beaches Jazz Fest (July 10-26)
The Beaches Jazz Festival continues to expand, this year encompassing three weekends at Woodbine Park, on top of the annual street festival, while still remaining free for everyone. Performances by the Lula All Stars, Chris Thomas King, Ogguere, God Made Me Funky, The Boom Booms, La Gran Colombia Orchestra and many more make this one of the most international options this summer.

PANAMANIA (July 11-25)
The Pan Am Games brings more than just sports. You'll be able to see acts like A Tribe Called Red, Radio Radio, Kiesza, Lights and Stars take the stage at the street party thrown at CIBC Pan Am Park. 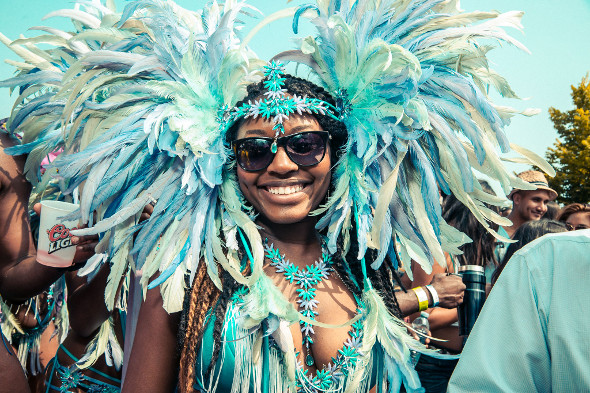 Caribana (July 30-August 2)
Caribana is back and is celebrating its 47th year and just keeps getting better. Offering up three weeks of nightlife, music and entertainment, this is one of the summer's most anticipated events for good reason.

Taste of the Danforth (August 7-9)
Taste of the Danforth is one of the city's most popular street festivals. The food is plentiful, with more souvlaki than anyone can reasonably handle.There's dancing and music, and there's an amazing high energy to it. Be warned though: the festival is this popular for a reason, so the crowds are massive.

Wheels on the Danforth (August 15)
The Danforth is being shut down for the ultimate automobile show. Look forward to scoping out classic cars and motorcycles, shopping, and listening to live music. End your day by joining in on the electronic street dance party.

York-Eglinton International Street Fest (August 15-16)
On the weekend of August 15th Eglinton Avenue West from Marlee to Dufferin will be closed for the York-Eglinton International Street Fest. The celebration is expected to draw in 25,000, so prepare yourself for crowds. It will feature a petting zoo, live entertainment, food vendors and countless other attractions. 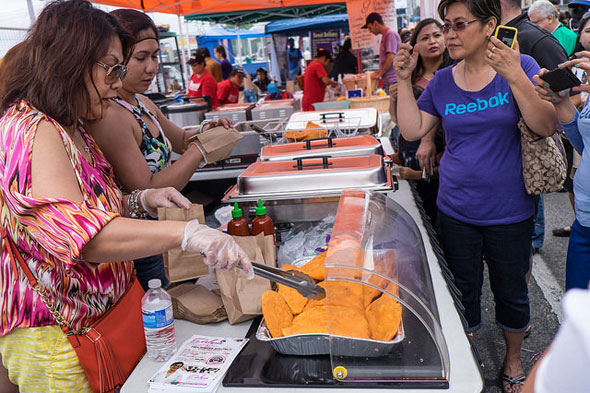 Taste of Manila (August 22-23)
Taste of Manila is an annual celebration that takes over Bathurst and Wilson with food from the Philippine's. Expect to find the streets filled with hungry festival-goers snacking on everything from dumplings to deep fried bananas. Check out what went down last year here.

BIG on Bloor (August 22-23)
Look forward to two days of shopping and entertainment when BIG on Bloor closes the street off to cars between Lansdowne and Dufferin. The event boasts a lengthy list of vendors, entertainers, and more. See the full list of participants here.

Chinatown Festival (August 22-23)
This neighbourhood is always alive with Chinese culture, but with this festival, the sheer volume of street foods on offer is astounding. You can also catch a dragon winding its way through the area, with lion dances at night. 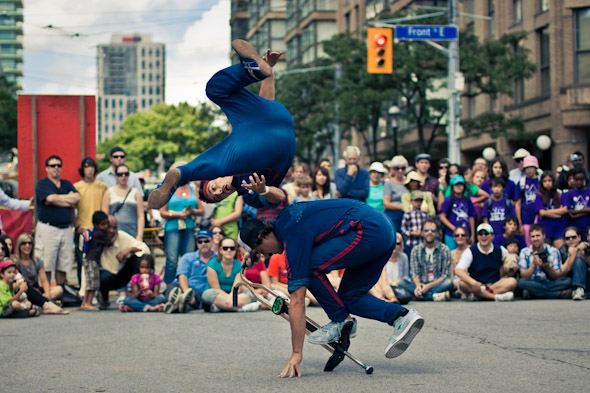 Buskerfest (August 27-30)
From August 27 to 30, a pack of delightful freaks and magicians will take over the streets with tons of live busking performances. Yonge St. will be open to performers and pedestrians alike between College/Carlton Streets and Queen St. As usual, the festival will be in support of Epilepsy Toronto.

Taste of the Kingsway (September 11-13)
Each year, on the weekend after Labour Day, the Kingsway comes alive with midway rides, beer and wine gardens, live performance and samples upon samples of local food. The street festival will run from Prince Edward Dr. to Montgomery Rd.

Toronto Ukranian Fest (September 19-20)
This is North America's largest Ukranian street festival. It started as a small gathering in 1995, offering the chance to sample the best in Ukranian food, music and dance, and now, it draws in about 500,000 visitors. This year's festival runs from September 18th to 20th on Bloor St. W.

Polish Festival (September 19-20)
Now is your chance to enjoy all of the pierogies and vodka you please without an ounce of guilt. The Roncesvalles hood, despite its relatively newfound trendiness, is still a Polish enclave, and they know what's up when it comes to food and celebration. Enjoy the Polish folklore, polka bands, and other live performances and vendors on September 19th and 20th.

What did I miss? Add your favourite summer street festival to the comments.