A baby animal parade at the Toronto Wildlife Centre

Summer is here and for folks at the Toronto Wildlife Centre (TWC), the only wildlife centre in the GTA and the largest one in Canada, this time of year means only one thing: babies.

This spring and summer, as many as 1,500 injured or orphaned baby wild animals will find themselves at TWC, where they will receive treatment and care until they're old enough to be released back into the wild. As a follow up to my visit in the fall, I was given the opportunity to sneak a peek at some of their current patients.

A six-week-old orphaned groundhog had been found wandering in Etobicoke, and actually began to follow someone on the sidewalk. Executive Director Nathalie Karvonen tells me that "this is a common behaviour for some baby animals who have been orphaned. They'll follow animals and even people seeking food and protection."

At TWC, this baby groundhog is being fed a specialized diet that mimics what she'd be receiving from her mother. "Nutrition is key for the babies", she says, "everything is developing: their bones, their eyes, their brain, their fur. If one component is missing from their diet during this important phase, it will literally affect their entire lives." 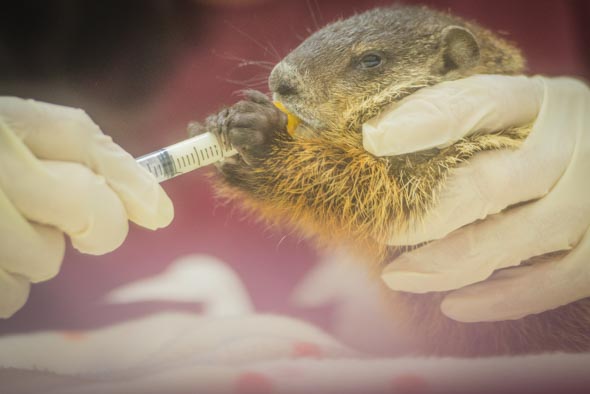 Lisa Fosco, TWC's Rehabilitation Manager, introduces me to a four-week-old grey squirrel who was found on a sidewalk with a bloody nose. "Orphaned babies will get so hungry they'll jump from nests, and they're top-heavy at this age, so they often land on their head," she says.

"This little guy actually crawled onto someone's shoe." When asked if squirrel mothers ever just abandon their babies, she laughs and says, "Are you kidding me? Mama squirrels are the most devoted mothers you could ever imagine. I've seen injured mother squirrels with their hind ends completely paralyzed drag themselves all the way back to their nests just to feed their babies." 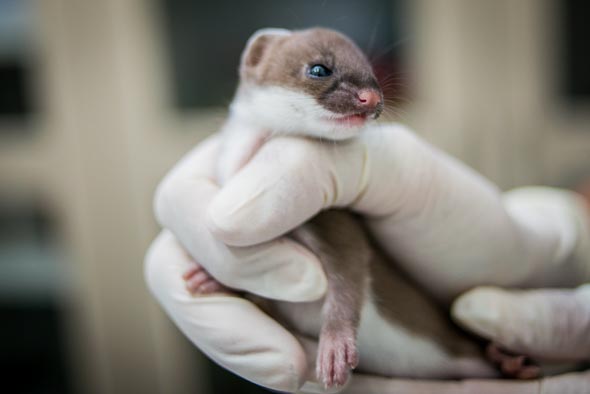 Fosco then performs an exam on two short-tailed weasels who had been found crying under a parked car at only two-days-old. A TWC fosterer named Debbie hand-fed them every two hours around the clock. Now that they are six-weeks-old, Debbie laughs and says she "gets a bit of a break" and only has to feed them every four hours. "They are so healthy!" Fosco excitedly tells Debbie, who beams. 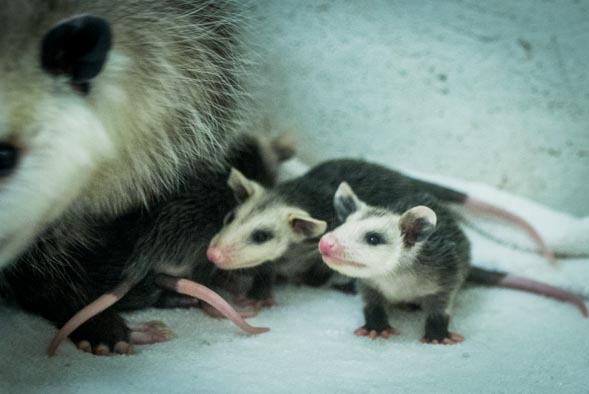 Since April, TWC has been treating a mother opossum who had been struck by a vehicle. Rather than stress her out by removing babies from her pouch, staff have waited patiently as the babies begin exploring the world outside for the first time. "We don't know the exact number of babies yet, because we don't want to get between Mom and her babies if we don't have to," Karvonen says. "But I'd say between 10 and 12." 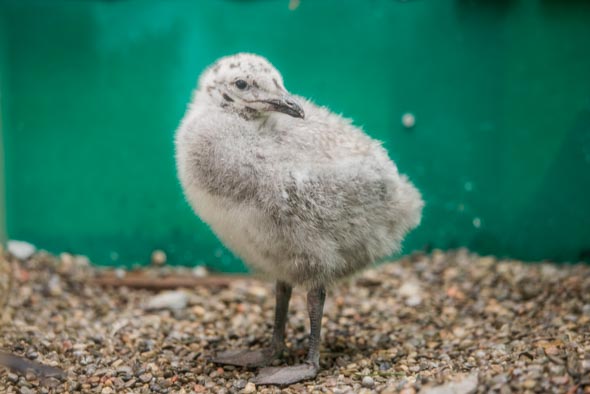 A young herring gull was brought to TWC after running onto a busy street and almost getting hit by a car. He is "bunking" with two adult gulls; "role models," Karvonen calls them. "Behaviourally, it's critical for wild animals to be raised with their own species. They need to have the opportunity to practice behaviours they'll rely on in the wild. They'll teach him what he needs to know about being a gull." 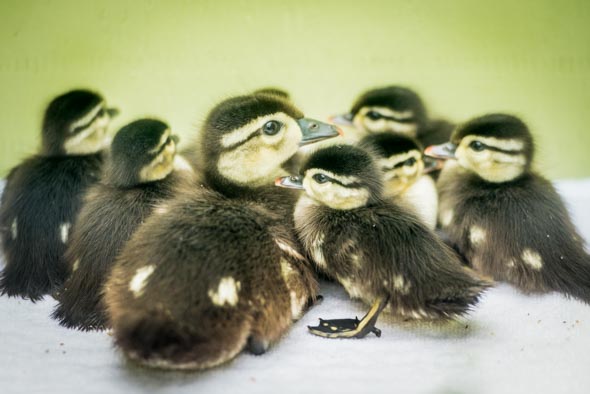 Seven newly arrived orphaned wood ducklings who had been found under a car in a parking lot huddle around another wood duckling who's bigger than them. "He actually came in alone, and it was just him and his mirror until these guys were brought in," Karvonen says.

Because ducklings get lonely, when there aren't other ducklings of the same approximate age and species, TWC staff will put a mirror in "and the duckling will cuddle up to it, like they would another duckling." 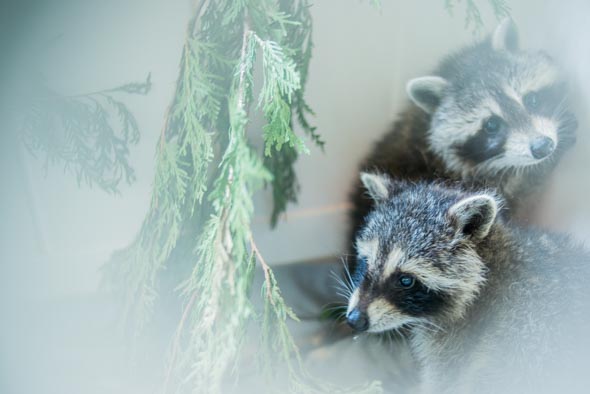 Karvonen flags down seasoned vet tech Aaron Archer to ask about a pair of raccoons who had been found on the side of the road, their bodies riddled with pellets from a pellet gun. "They're definitely improving," he says. "They weren't moving much when they came in, but they're more active now, and they're eating, which is great." Still recovering from the trauma, they were photographed through a hole in their enclosure. 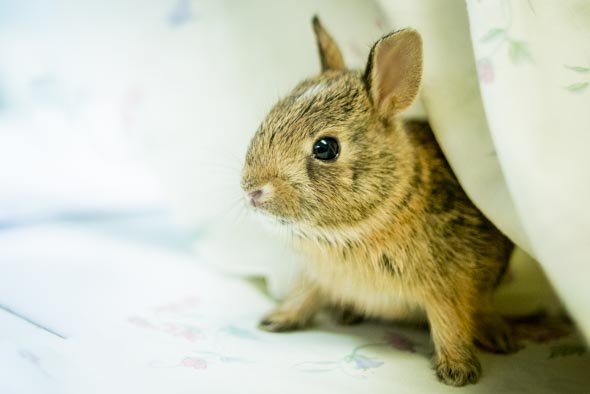 Next, we watch as two volunteers prepare a litter of cottontail rabbits for feeding. Something had attacked their nest and their mother had been killed. 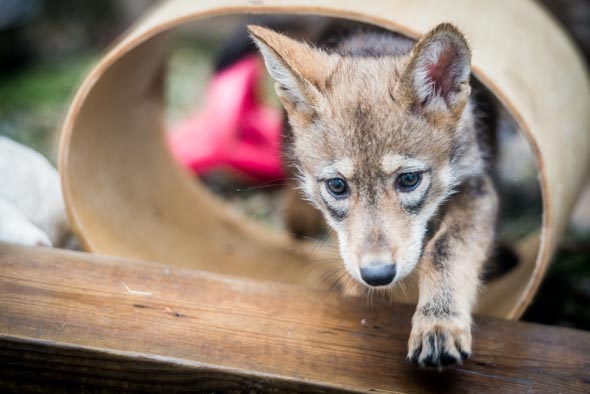 As we approach the coyote enclosure, I notice a sign posted reminding volunteers that there is "no peeking" allowed. Aaron explains, "[t]he best thing you can do for a coyote is help them maintain a healthy fear of humans, since we're their biggest threat."

Aaron slowly opens the door to feed five young pups - two boys and three girls - who climb over one another and scamper around just like domestic puppies. The enclosure is designed to mimic their natural environment as much as possible: evergreen branches, logs, blankets for burrowing. And of course, a few dog toys for enrichment. "The toys are very popular," Aaron says.

The two boys are brothers who were dumped in some bushes after being evicted from their den by someone. They arrived with fluid buildup in their lungs and finally started rallying after a week of round-the-clock care.

The three girls came in separately. One was found alone in a field during a rainstorm. Another convulsing on the side of the road. The third, who has strawberry smudged on the end of her nose, was found by a police officer after her mother was killed by a vehicle. "She was rushed to an animal clinic just as she was beginning to flatline," Karvonen tells me.

Thanks to the kindness of strangers, each of these animals (and hundreds more) have ended up at TWC this spring. Once they're ready, they'll have another shot at the wild life they were meant to live. "We need to make sure they're mature enough to fend for themselves," Karvonen explains, "so we typically release them around the age they would normally disperse from their parents." 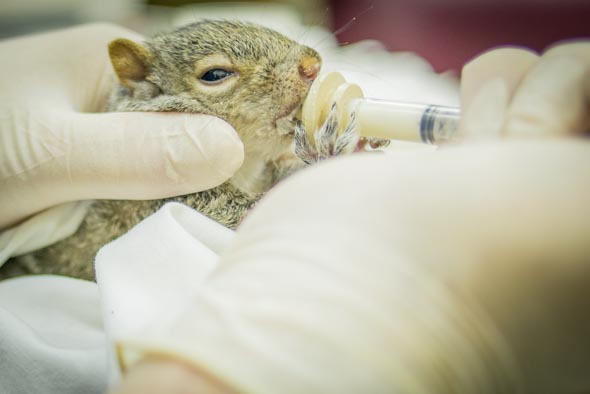 For some species, like squirrels, this can mean spending up to 10 weeks at TWC, but for others, like raccoons, it can mean up to 5 months.

When asked if she thinks people understand how much care these wild baby animals often need, she says, "Some probably do. But I think most people simply aren't familiar enough with the process to understand how specialized the care is for each species, how much time and resources one sick, injured or orphaned baby can require.

That's why we describe our work as a community effort: TWC has the facilities and expertise to care for these animals, but the public are our eyes and ears, and also our support base. We've been operating 365 days a year for more than 22 years, but the more support we have, the more animals we can help!"

Want to help TWC? Consider a symbolic "adoption" of an orphaned baby squirrel, rabbit, raccoon, duckling, kestrel, or opossum. (You even get a little adoption package in the mail!) To make a general donation or volunteer, visit their website.