Snowskating surges in popularity around Toronto

Snowskating is the best winter sport you've never heard of. Founded back in the 1990s, in recent years it's started to take off in the Toronto area. If you've ever noticed someone doing some really weird-looking snowboarding at Riverdale Park or at one of the ski hills north of the city, chances are this is what you witnessed.

So what is snowskating? "It is the art of skateboarding on snow," explains Rob Sydia from Toronto's Longboard Haven. "Snowskaters use skill and balance, not bindings, to stay on their board. This blows average observers out of the water, but comes as no surprise to skateboarders and surfers."

Early snowskates were typically rudimentary DIY creations (sometimes referred to as "frakenskates"), but now companies like Ambition and Harfang are making top of the line products in response to the growing popularity of the sport. 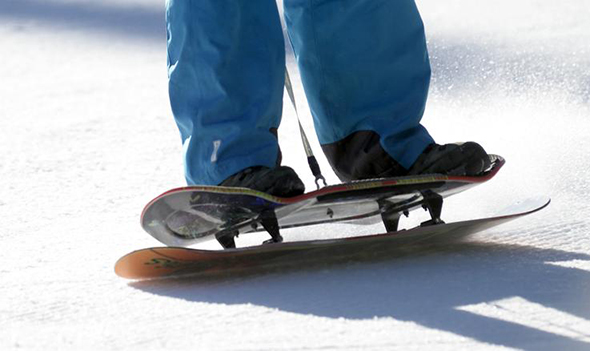 Snowskating can be done anywhere there is snow, Syiad tells me. The key areas in Toronto are Riverdale Park, Christie Pitts and High Park. There are also a number of local ski resorts that allow snowskates on their hills, including Lakeridge, Dagmar and Sir Sams.

Staff at Longboard Haven, which has become the headquarters for Snowskate Ontario, are trying to work with the city to have snowskating permitted at public ski hills like Earl Bales and Centennial Park.

When asked why the sport seems to be catching on, Sydia notes the ease at which people can practice it. "The learning curve is short and the gear is compact. Snowskates are truly utilitarian, they can be ridden anywhere, from powder in the backcountry, carving up your local ski hill or going crazy in the terrain park...they do it all!"

For those looking to try out snowskating, there's a weekly event on Wednesdays at Lakeridge Ski Resort, where both early adopters and newbies are welcome to get a feel for the sport.