Behind the scenes at the Toronto Wildlife Centre

"The smaller the owl, the bigger the attitude," says Toronto Wildlife Centre rehabilitation manager Lisa Fosco as she hand-feeds a northern saw-whet owl. Although he stands no more than six inches tall, there's something about his unwavering gaze that makes me believe her. This is how my visit to the city's leading wildlife rescue and veterinary care facility begins.

The owl is being treated for a spinal injury, almost certainly caused by a collision with a car or window. He's minimally handled, to keep stress levels down. When I ask TWC founder and executive director Nathalie Karvonen about taking precautions around bird disease, she says "Yes, definitely." 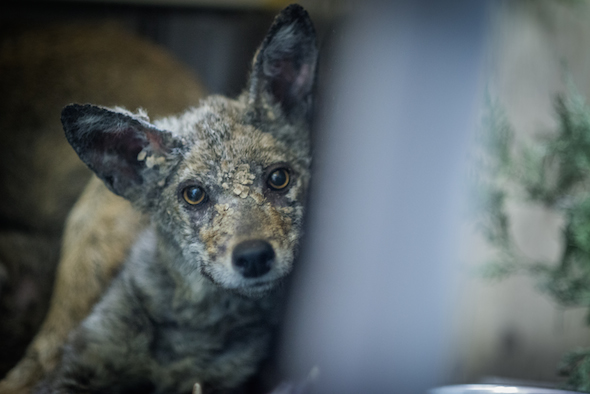 We do training with staff and volunteers about protecting themselves from disease, but that's because we're working with the sick ones, it's not because the animals generally are 'diseased.' Pigeons are a great example, people think they're all diseased, but I would be much more concerned about the door handle at a public washroom myself, than I would be a pigeon."

And she would know.

Up to 5,000 animals come thru the doors of the 14,000 square foot facility each year. Since opening on March 28th, 1993, TWC has been open an astonishing 8500 days in a row. "Every Christmas, every day that Mel Lastman called in the army, we were open. We even took calls and admitted new patients during that propane explosion when we couldn't actually get into the space," Karvonen says, referring to the 2008 Sunrise Propane explosion. 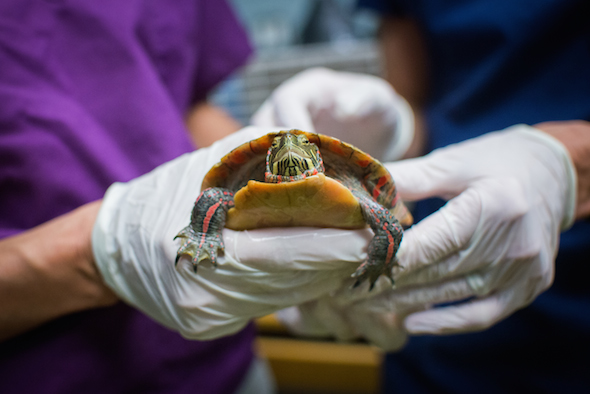 5,000 animals may seem like a lot - and TWC is Canada's largest wildlife centre - but according to Karvonen, "most people don't realize just how much wildlife there is living in the GTA. We work with over 270 different species, and we're still not meeting the community needs. We're the only wildlife centre in the GTA. We take on what we can handle with our current resources." She estimates there is double the number of wildlife in need of assistance in the GTA. On the day of my visit, there are 291 animals in care. Including nine coyotes that I'm allowed to take a peek at. 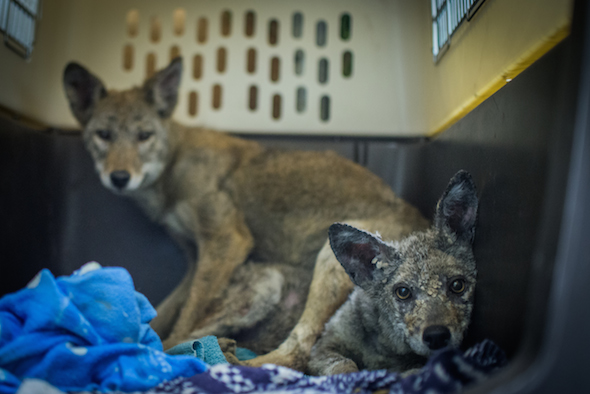 Karvonen leads us into a room, and I'm startled by the stillness. If I didn't know better, I'd think it was empty. But sure enough, there are two coyotes hiding in a kennel that is buried under evergreen branches. "There's a misconception that they're terribly dangerous, that they'll drag off our small children into the woods and have them for dinner, and that's just not true. If we need to roundup a coyote to medicate or feed, I'd be comfortable using just a towel. I'm way more afraid of a heron."

Suspected orphans, these juveniles are being treated for mange. Each one weighing in at no more than 20 pounds, they look at me with utter deference, much the way an abused dog looks at people. I ask if this is normal, and Karvonen confirms it is. "We are the predator, not them," she says. "Take the people who feed them. They refuse to understand that coyotes don't need us to feed them stale hotdog buns to survive. In fact, when people feed them, they're essentially training them to come for a food reward." 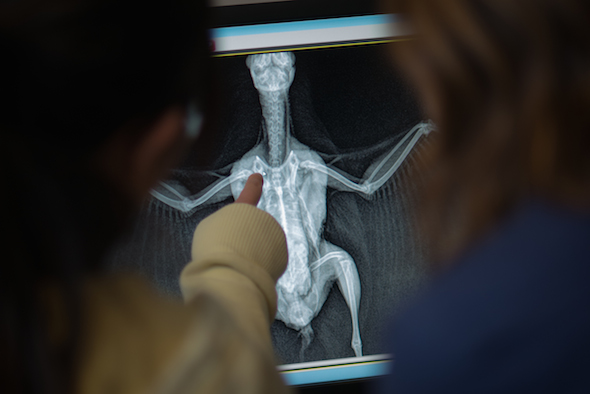 According to Karvonen, the Ministry of Natural Resources doesn't intervene when wildlife are injured or orphaned, and legally, a vet can't rehabilitate wildlife unless they also happen to be a licensed wildlife rehabilitator. She shares the story of a call she received from a vet clinic about to euthanize a kestrel (a small falcon) because it kept falling over on its back. "But every single kestrel in captivity does that," Karvonen says.

"They're tiny, so the only defence they have is to lie on their back with their talons out and their beaks open. But the vet was just thinking in dog and cat terms, where falling on their back would be a bad sign. They don't necessarily realize that wild animals have such different behaviours."

The TWC has a team of about 25 "full-time equivalent" positions, with more than 300 volunteers (including a cherished microscope repairman who's volunteered for more than two decades.) At the helm of the rehabilitation program is Lisa Fosco, who was an instructor for the International Wildlife Rehabilitation Council for 13 years. 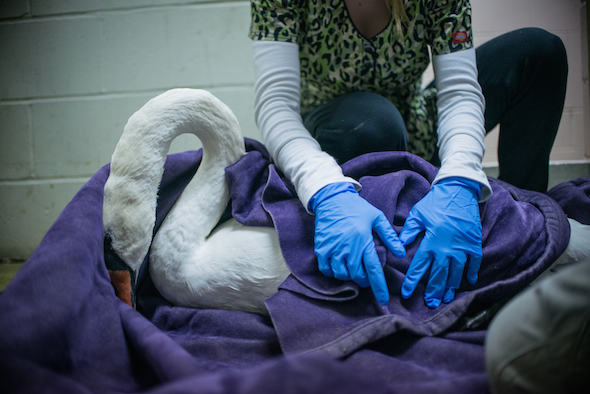 I watch as Fosco and a technician prepare a saline flush for a swan being treated for zinc toxicity. "They'll eat anything shiny, so lots of human garbage. This one probably ate a nail," she says. Thankfully, x-rays show that the swan has passed whatever caused the poisoning. "Go slow," she says to the technician as they insert the needle. "The flush makes her nauseous." The swan buries her head in the blanket they've got her lying on.

Fosco says that at least 85 per cent of admissions to wildlife centres are caused by humans, which is perhaps why the "let nature take its course" adage is so puzzling to her. "Take baby squirrels falling out of nests as an example. People say 'let nature takes its course,' but the reality is squirrels lay their nests in large clumps of leaf litter, and the nests can't handle wind, so when you go and cut down all the trees, the few trees left standing can't handle that wind-load, so all the nests will fall out. Or someone's cat will get one. That isn't nature." 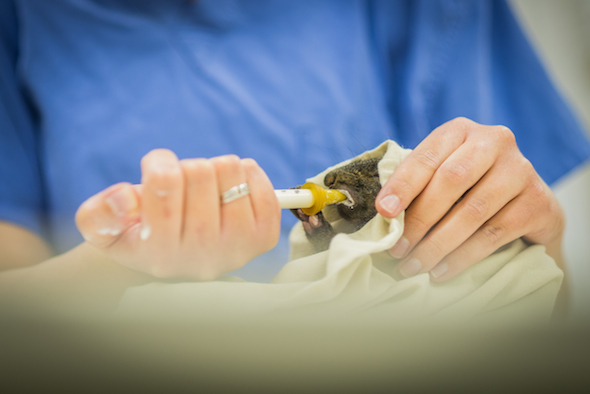 On the day of my visit, there are 86 squirrels in care. I watch a volunteer gently hand-feed a litter, one at a time. Most squirrels who end up at TWC were orphaned, "kidnapped" (referring to well-intentioned people who remove them unnecessarily), injured in collisions with vehicles or attacked by domestic predators.

Despite the fact that the city (via 311) will direct people to TWC, the centre receives zero funding from them. "Our bread and butter is mostly just goodhearted people supporting us," Karvonen says.

And it's not just the animal lovers who rely on TWC. "Almost any type of person could call us. You may never have thought about wildlife your whole life, but maybe your child brings one home, or one flies into the window of your office building," she says. 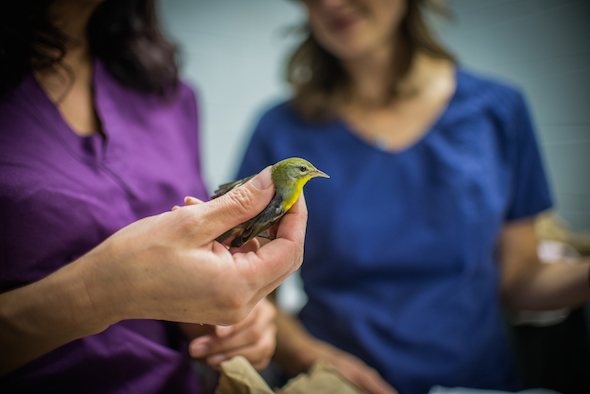 In fact, songbirds colliding with office windows are one of the most common causes for admission to TWC. On the day of my visit, there are 35 songbirds (from 17 different species) in care. I watch as Fosco and the head vet, Dr. Reid, assess a Northern Parula who survived a building collision. Karvonen tells me that "long before Toronto was a city, what is now the downtown core was an ancient migratory route for these birds."

As we wind down the tour, I ask her what the TWC wishes every Torontonian knew about them. She smiles and says, "We can't do the work we do without community support. No matter how much we do, we still can't meet the demand. We're here to help, but we need your help too. This can be a happy community effort."

To learn more about TWC's work, make a donation, become a monthly supporter, or volunteer, visit its website.