The sights and sounds of the CNE at night

Just before the sun starts going down you see them - the exodus of fairgoers through the Princes' and Dufferin Gates out of the CNE, but after nearly five decades of the Ex I have never understood why they're going just when everything's about to get good.

Sure, their feet might be tired or their wallets empty or they might be sick of carrying around a five foot tall stuffed Spongebob Squarepants or a tiny motorcycle. But the CNE that CNE haters complain about - hot, tacky, crass and worn-out - disappears when the sun goes down, and in its place a strange, vivid, even magical place emerges from the darkness. That it still remains hot, tacky and crass is purely a bonus. 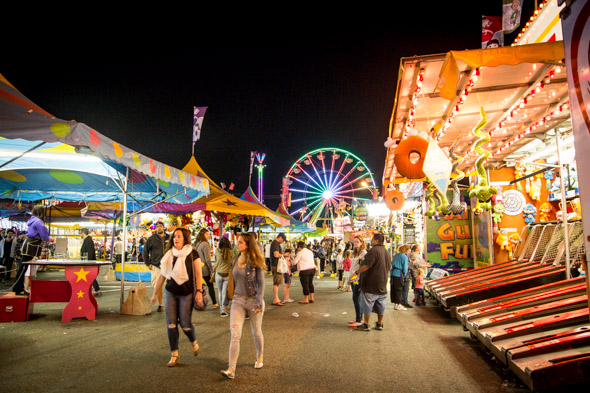 First of all, it has to be understood that the midway rides - the Crazy Mouse and the Polar Express and all those other rickety chestnuts that get deposited here every August by North American Midway - aren't meant to be enjoyed in sunlight, either from the inside or the outside. 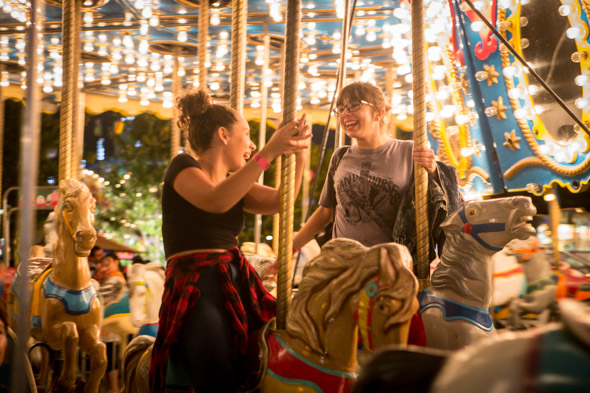 As much effort has gone into covering them with grids of lights as making sure they work, into making their heaving blur as you're strapped in more terrifying, and their vast spidery frames stand out against the sky as it fades from blue to black. 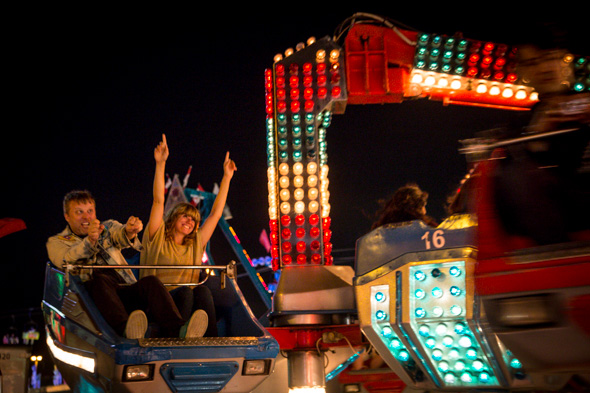 No two nights on the midway are ever the same, even though the basic smells (sugar and hot oil and scorched corn husks) and sounds (the rumble of machinery and crescendos of screams) are an abiding constant. 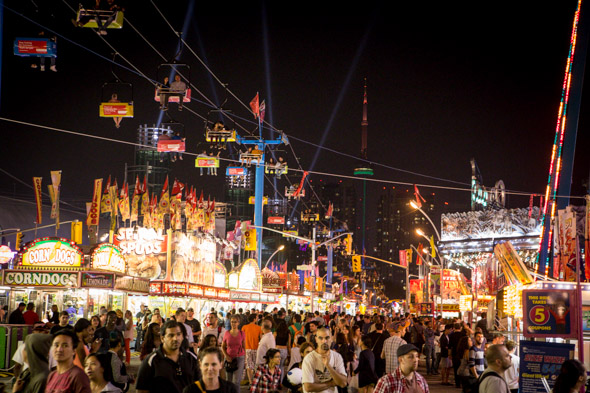 The music blaring from the rides changes with each year's top 40, laced in with whatever cover band or faded chart act might be playing on the nearby stages, and each year's new crop of youthful barkers. Occasionally a new sound is introduced to the mix; for the last two years it's been the hiss of the zipline overhead. 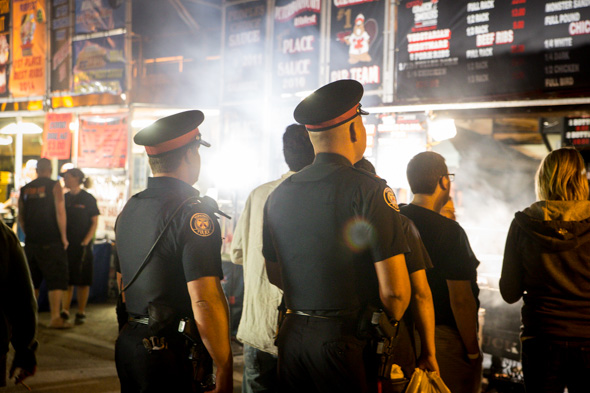 Even the weather plays its part. After a scorching, muggy day, the relative cool of the night is sweet relief, though the humidity lingering in the air makes sound muffled, as if drifting through a fog. 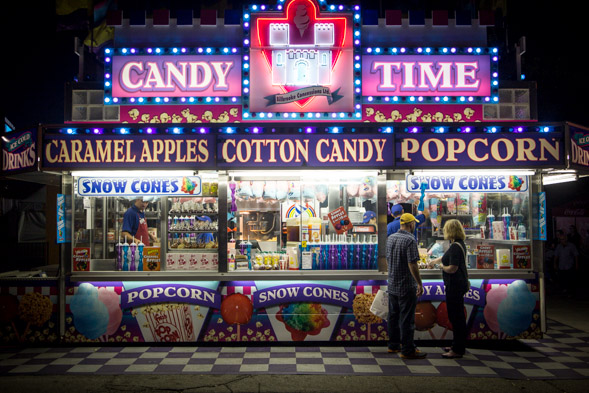 On chill nights, though, the air seems thinner and the shrieks and clangs and blaring music seem more focused, sharpening the sound as it echoes off the cotton candy stands and funhouses. 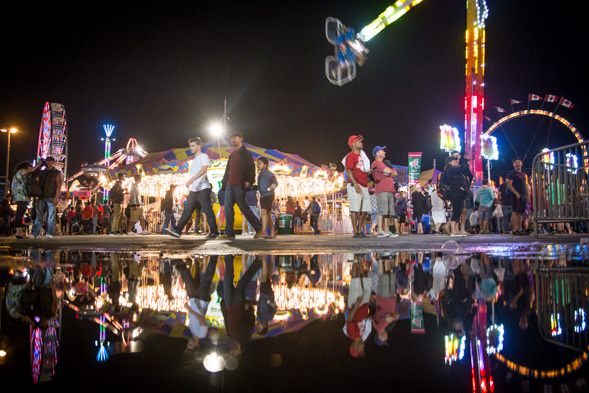 Over in the marketplace at the Direct Energy Centre, Jason Scott sells Panasonic massage chairs that cost either thousands of dollars to take home or five bucks for a fifteen-minute "ride." 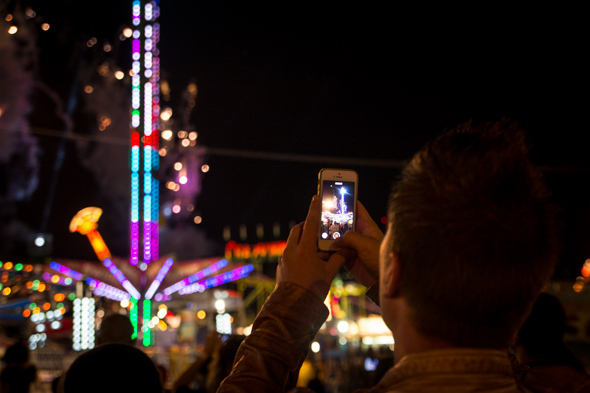 He says he does more sales pitches during the daytime but rents more chair time in the evening, as Ex-goers stop in on their way home. The final weekend, however, is where things get serious.

"We can easily do half our business in the last four days." 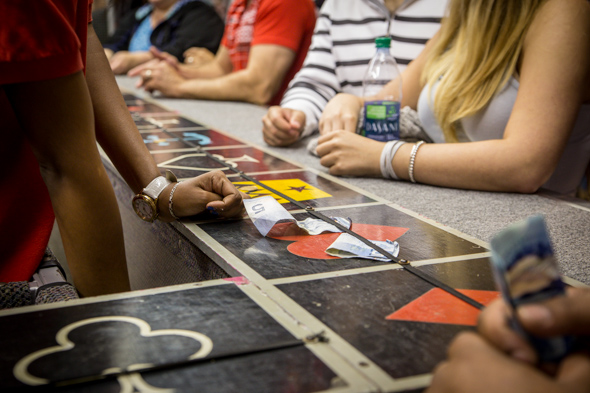 Out on the midway, Lisa is running one of the midway games. Originally from Panama, it's her first Ex, and she says that while it gets busier as the day wears on, the big rush begins at 8pm and continues until everyone either runs out of luck or change in their pockets. 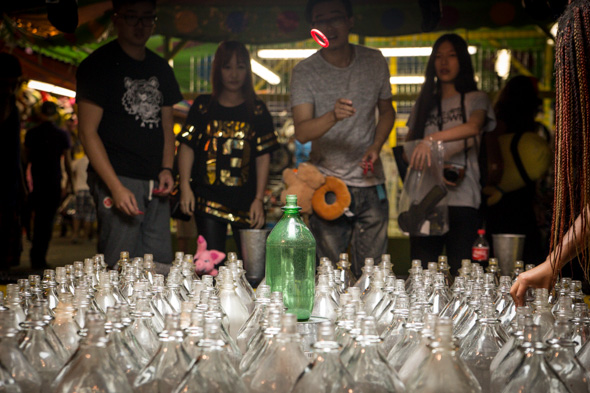 At the gaming booths, knots of people will suddenly bloom at the plate break or bottle toss booths as groups of young men egg each other on, trading loonies and toonies and five dollar bills for further chances at a prize, most of which leave them empty-handed. 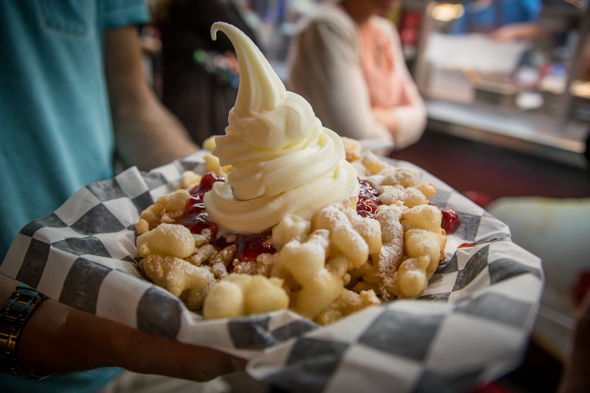 Even with just an hour before closing time, after the Food Building has locked its doors, people still line up for bags of little donuts and deep-fried onions, and search the midway for rides that are still running. 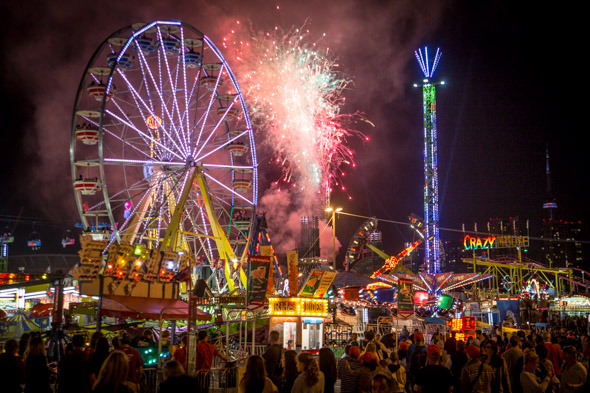 Even when the fireworks next to the Princes' Gate announce the final hour's countdown, the crowds are still there, looking for one last ride or snack or game, knowing that when they finally put their money away and start heading for home, summer will be over. 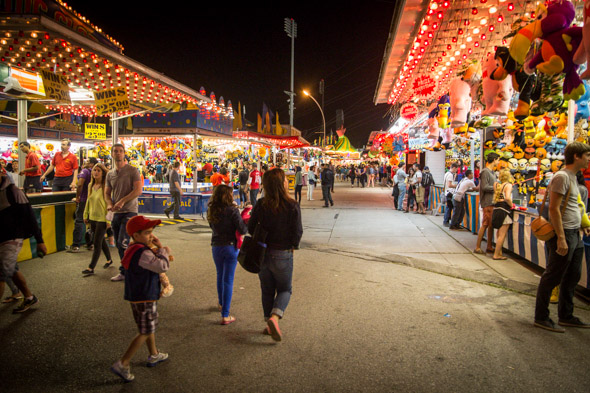