Toronto's Honda Indy has to compete for a citizen's summer entertainment dollar, which is probably why the city's downtown car race landed one of the three "two-for-one" race weekends in this year's Indycar calendar - a long weekend of racing that begins with a day of free practices and qualifying laps before two races back to back. With a variety of other races filling out the bill, it means a weekend of near-satiation for motorsport fans, and just a little more irritation for folks who simply don't like this sort of thing. 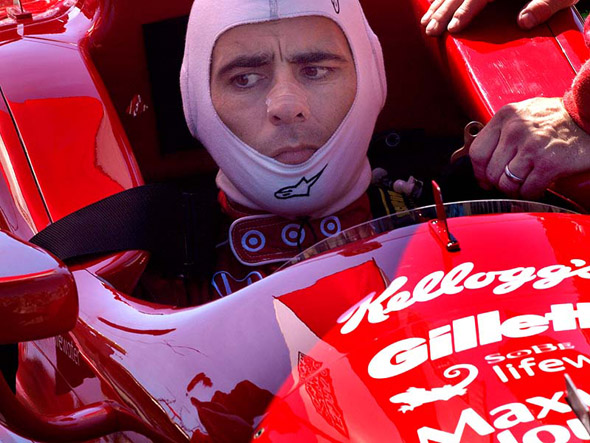 Opponents of the downtown Indycar race, now in its third decade, complain about the inconvenience and the road closures but mostly they complain about the noise. Oddly enough, that's exactly what fans of the weekend race enjoy about it, and this year's race had noise of every sort, from little four-banger engines to turbocharged V6s to rotary Wankels and monster V8 and V10 powerplants tearing open the clear blue sky that graced the whole three days. 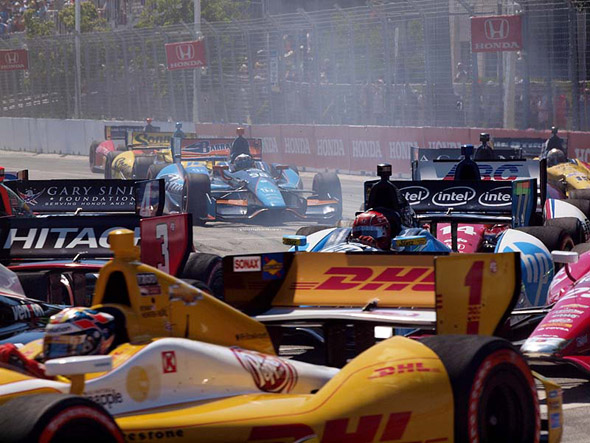 The two Indycar races are the main event, of course, but there's probably more fun to be found in the supporting events, which include the three tiers of racing series in the "Road to Indy," which includes USF2000, Pro Mazda and Indy Lights, each running open-wheel cars of increasing sophistication, with drivers as young as fifteen sitting behind the wheel. I tried to pay more attention to these overlooked series this year, and found that I really enjoyed the USF2000 races. 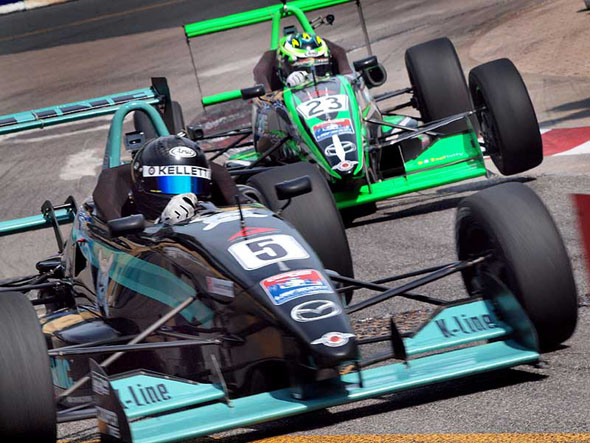 Running a V4 engine, these relatively small cars have low, almost tubular bodies with long suspension struts, skinny wheels and two simple wings, front and back, that make them look like the Formula 1 cars of the late sixties. Driven by men like Jackie Stewart and Mario Andretti, they only raced for a couple of years before the science of aerodynamics and the quest for grip made race cars look more like planes. They were quick and agile, and as the USF2000 cars piled into turn one after the green flag, I could almost imagine what pro racing looked like in the days before you needed the backing of several major conglomerates to run a team.

The other big series on the card in Toronto was the Pirelli World Challenge, running four classes of cars that are as close to "stock" as you'll find outside of a dirt track these days. The big engines and money are in the GT and GTS classes, where you'll find Porsches, Mustangs, Vipers, Camaros and Audi R8s making the most noise of the weekend, with the biggest sound coming from the Cadillac CTS V-Rs, which made a truly terrifying sound as they powered in and out of corners. 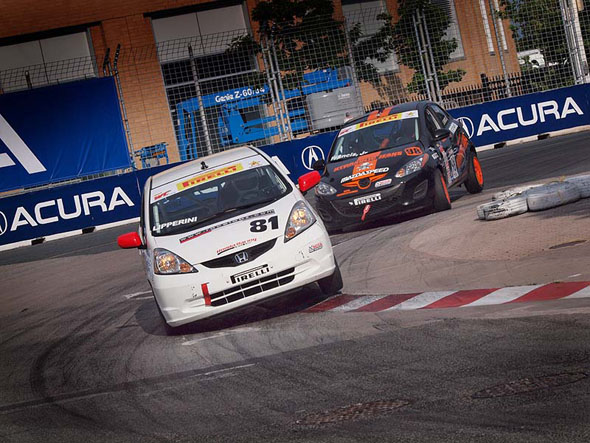 The most entertaining race, as far as I was concerned, was on the low end of the PWC card - the Touring Car and Touring Car-B classes running compact sedans and budget econoboxes around the street track carved out of the Exhibition grounds and a stretch of Lake Shore Boulevard. The might have been lowered, race-prepped and tuned up, but these were the same Civics, Fiat 500s, Mazda 2s, Minis and Ford Focuses that fill our streets and jostle for parking spaces, and it was a gas watching them lunge through corners and sprint down the straights like toddlers running for an ice cream truck. 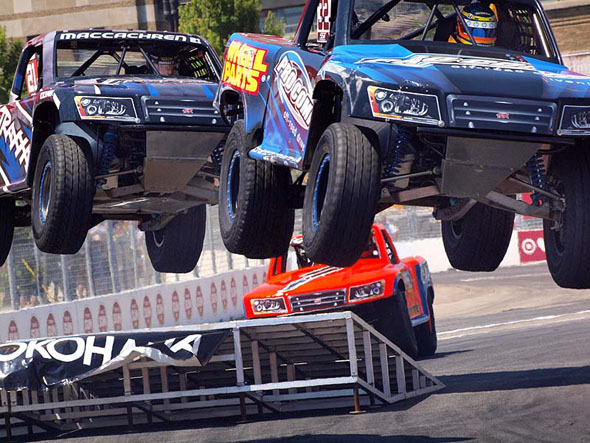 The biggest crowd pleaser of the weekend was a pair of demonstration races of the Stadium Super Trucks, a new series just launched by NASCAR driver Robby Gordon. Racing trucks fitted with huge tires and massive suspension tear around the track, turning corners on two and three wheels and hitting ramps that give them massive air. With star drivers like Paul Tracy behind the wheels, Gordon has refined an old idea that comes off like the thinking man's Monster Truck. It was stupid fun, and judging by the crowd reaction, a hit in the making. 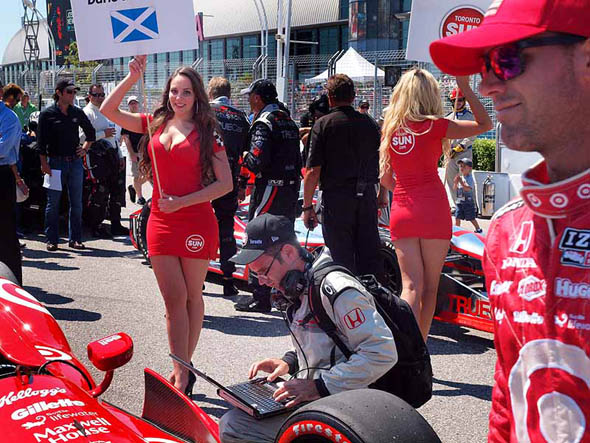 The main event, however, is the pair of Indycar races. The idea of running two races on consecutive days might be great for maximizing the spectator value of a street race like Toronto, but most drivers have admitted beforehand that having barely 21 hours instead of a week or two to recuperate between races is something like hell. Then there are the mechanics who have to spend the night rebuilding engines, transmissions, and even whole cars if they hit the wall or each other the day before. 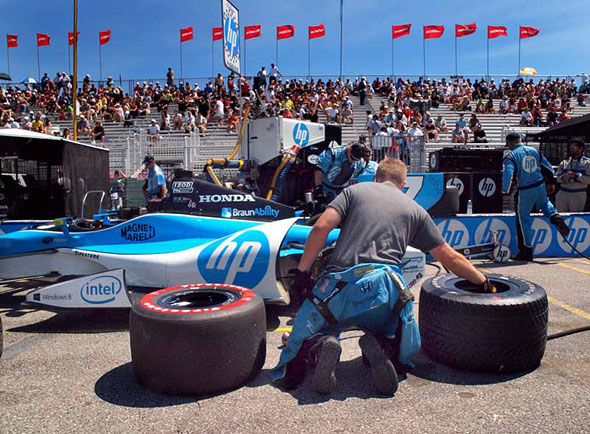 On top of that, Indycar chose Toronto as the place to hold the first standing start in the history of the race. Instead of running a couple of formation laps before sprinting down the start line under the green flag (like NASCAR,) the cars would form up in a grid behind the starter's flag (like Formula 1.) Since many Indy drivers had never done a standing start in their professional career, if at all, this was even more controversial than the two-fer races.

As if to add just a bit more drama to the weekend, racer Ryan Briscoe broke his wrist in a crash near the end of Saturday's race, so his team tapped young Indy Lights driver Carlos Munoz to take over his car for Sunday. At a press conference before the Sunday race, Munoz described how he got the call at 7pm the night before, as he was packing for an early flight home the next morning. 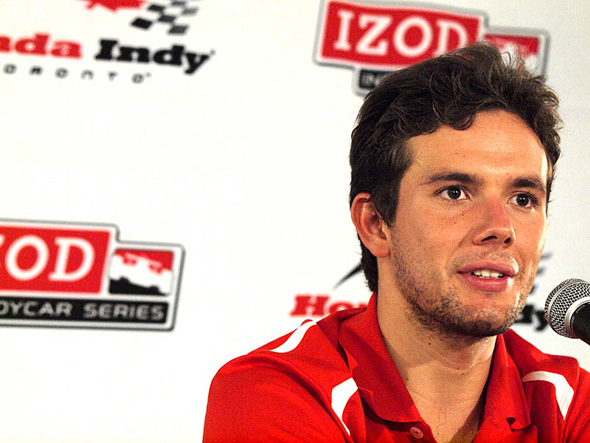 "I was very surprised because it was really late," Munoz said. "I talked to a bunch of different guys and they said you have to take this chance ... These guys have been running here since Friday, and going into it this late is like swimming with sharks." 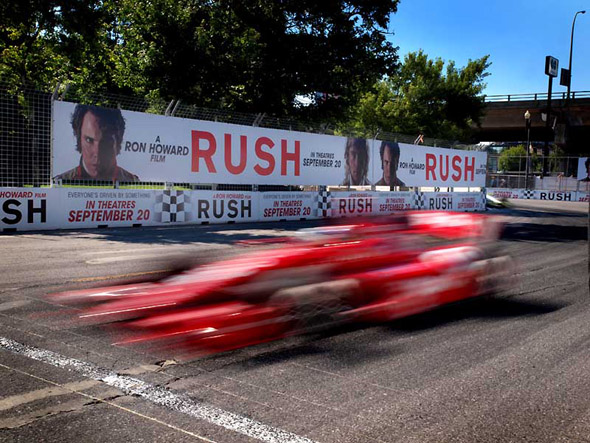 Saturday's race was ragged. The planned standing start was aborted when a driver at the back of the grid stalled, and the race went on with stalls, collisions and race incidents, culminating in a comic podium mishap where second place winner Sebastien Bourdais dropped his crystal trophy bowl to watch it shatter, and Dario Franchitti was told, just before stepping up to the podium, that he was being penalized for a race incident and would be moved back to thirteenth place. His win was reinstated afterward, but it was no doubt on his mind as he stood and watched Bourdais' trophy bounce and break. 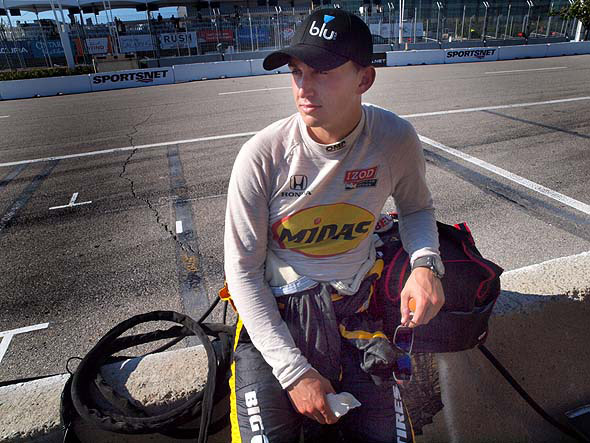 Back on pit row, Graham Rahal was reviewing the race, which saw Tristan Vautier make contact with his car on lap thirty-five, sending him into a spin and Vautier into a stall. It put him near the back of the race, in twentieth place, and with less than a day until the next race, I ask him how he's going to prepare.

"I feel good at this moment. It definitely was a physical race, there's zero doubt about that. But you know we're going to get a lot of rest tonight. Go get some sleep and get a big steak in us, get some energy and go back at it. This is a tough place; it's bumpy, as you can imagine and our hands get blisters which you definitely have to tape up before tomorrow."

Rahal is from a racing family - his father Bobby won the first race on the Toronto street circuit in 1986, and co-owns the team Graham drives for alongside teammate John Jakes. He knows a rough race when he sees one.

"From the looks of it there are a lot of parts laying around on the track - people were really hard on each other today." 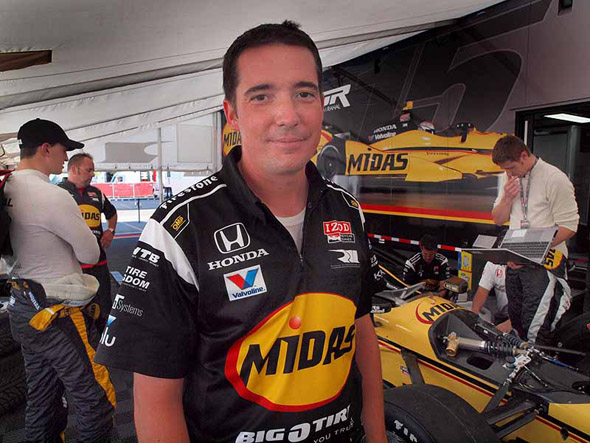 Back at his team's paddock, I ask Donny Stewart, Rahal's crew chief, what he has to do to get the car ready again for tomorrow. It sounds like more work than most people do on their cars between buying it and selling it, but this is normal here.

"This weekend we have a little more because we damaged the underwing in this race so we'll have to change the underwing, get our backup car out and get the underwing off that one. Swap it to this car. We'll rebuild the brake calipers just because of the temperatures from when we stalled. So we'll rebuild that tonight." 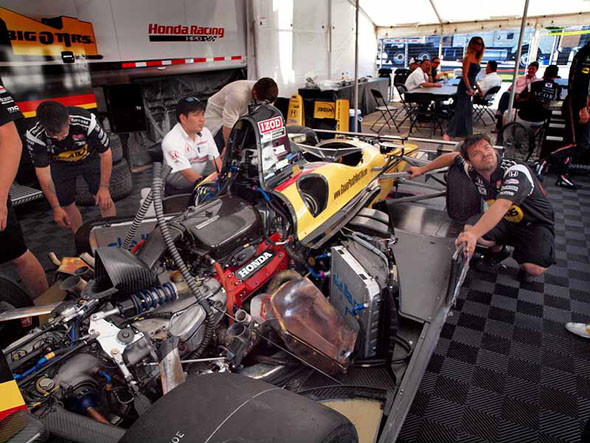 "We'll take the gear stack out and inspect everything, do a good nut and bolt on the whole car. Change air filters. For the engine, take a good look at the exhaust. Preventative maintenance is the biggest thing, really." 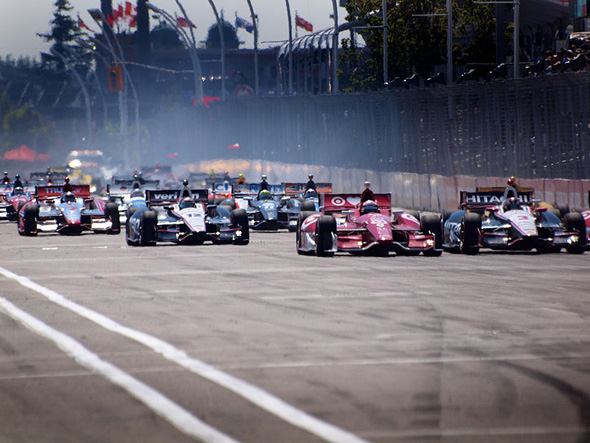 The next day's race begins with a standing start again. This time it takes, and the ensuing race runs in the hottest temperatures of the weekend. Walking the track wall taking pictures, the race seems cleaner than the day before, but there are still crashes, one that takes out John Jakes, Rahal's teammate. By the third day of driving, the track is black with rubber and littered with bits of shredded tire. 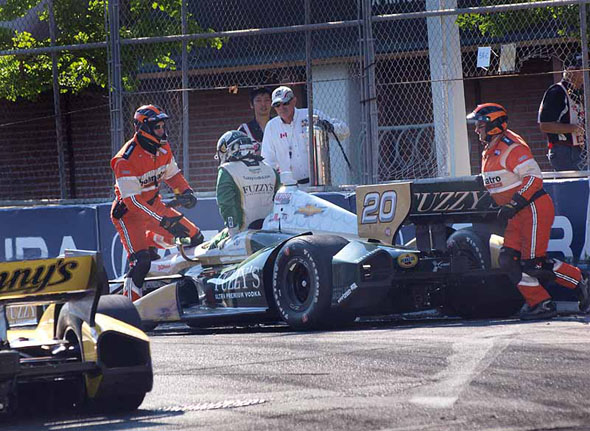 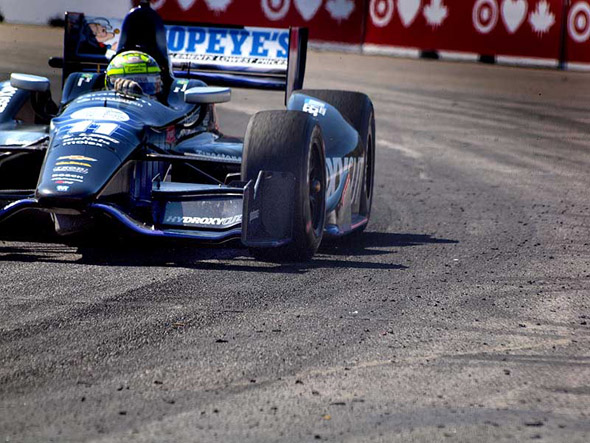 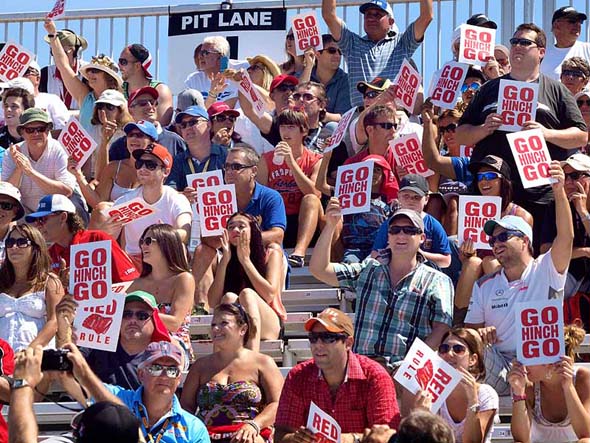 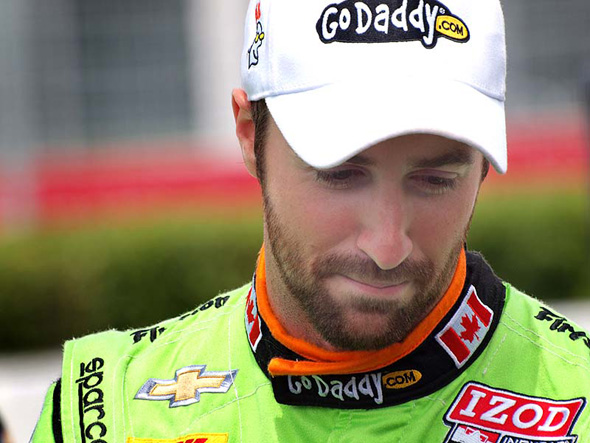 I feel bad for James Hinchcliffe. It's the hometown race for this Oakville-born driver and despite the obvious support for fans and no shortage of media, he finishes eighth the first day and 21st the second, after his throttle sticks in the pit lane before the start, leaving him at the back of the pack for the whole race. 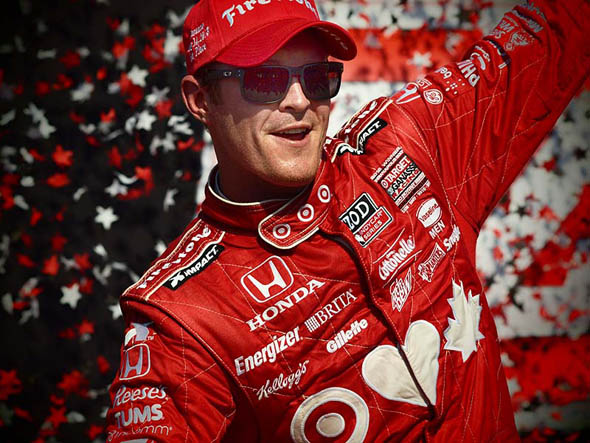 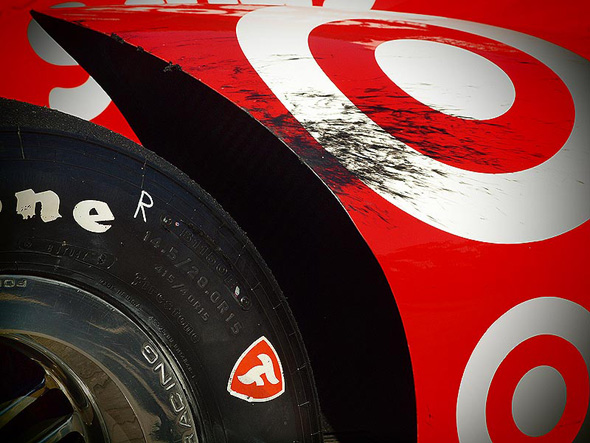 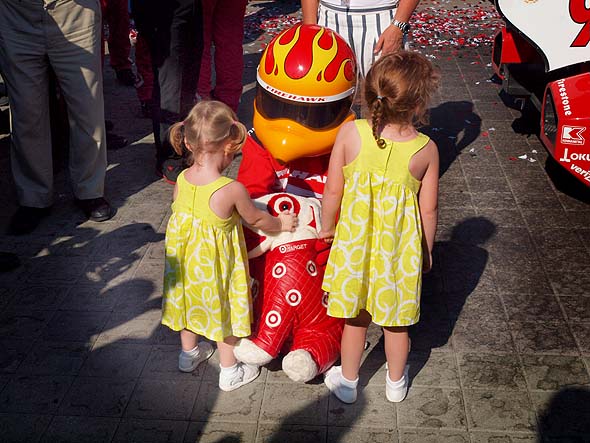 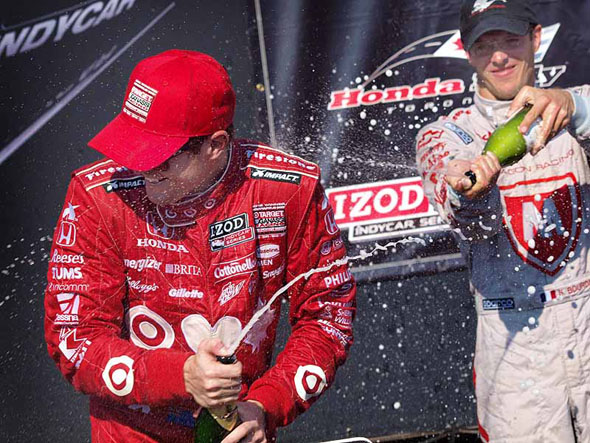 In the end, it's Scott Dixon's weekend. The New Zealander wins both races - three in a row - and a hundred thousand dollar prize offered to anyone who can win a whole race weekend. His daughters end up getting much of the attention from the cameras at the winner's circle, his youngest making off with Bullseye, the stuffed toy mascot of Target, his car's sponsor. After the customary champagne bath, it's all over, and the business of tearing down the Toronto Indy track for another year begins. By the end of the month all that's left will be the burnout marks on pit lane.