Yoga for jocks in Toronto

Every month, a group of my friends get together to try out a different type of fitness class in Toronto. As fitness enthusiasts, our monthly fitness outing is a great excuse to catch up and discover a different way to work up a sweat at the same time. For our latest fitness outing I convinced the girls to try one of Michael DeCorte's Jock Yoga classes.

A former bodybuilder and marathon runner, DeCorte understands why many tend to pass off yoga as a gentle stretching class because it won't give them the workout they desire. After completing his formal teacher training at Downward Dog in 2008, DeCorte developed Jock Yoga to challenge this assumption by offering an intense full-body workout through the use of fundamental yoga postures.

The response has been very positive so far and one of DeCorte's regular students, a personal trainer, told him that it was one of the hardest workouts he's ever done. Many use Jock Yoga as a form of cross-training to supplement their main activities, and DeCorte explains that you can attend a class to build strength and endurance, but "you don't have to be able to put your leg behind your head".

When DeCorte enters the studio, he immediately turns up the heat and asks the class with a smile if it feels too cold in the room (it's already quite warm when he asks this - and he knows it). The atmosphere for the class is casual, and a few students even joke back and forth with DeCorte while he continues setting up. 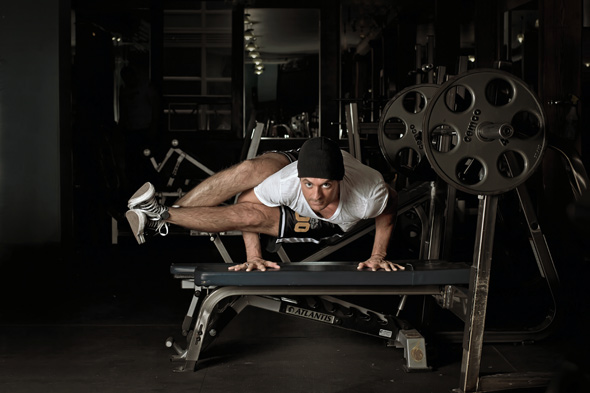 Before we begin, DeCorte reminds us to be honest with ourselves on what we're capable of, and to take breaks or modify poses if we need to at any time. Like a typical Vinyasa-style class, we start off slowly with a series of basic sequences - but that's where the similarity ends. For one thing, the pace of the class is much quicker with virtually no recovery time, and DeCorte is relentless as he has us repeating each sequence to the point of exhaustion. Within minutes, I'm covered in sweat - and a few glances at my friends assure me that I'm not the only one.

For the second half of the class, DeCorte takes us through a series of grueling leg postures and core work and I can feel myself struggling to keep up. As a last burst of energy, he demonstrates a few arm balances that only a handful of students are able to come into, while the rest of the class watches on in disbelief. It's hard to imagine having the energy and strength to attempt any balancing at this point in the class, but watching others do it makes me feel like I can get there someday.

After class, my friends tell me that they were surprised at how difficult Jock Yoga was and that they'll be feeling the effects of class throughout the week. I'd say that makes for a successful fitness outing and I can't wait to go back for more.

Jock Yoga is currently offered at several studios across Toronto throughout the week. For a complete schedule, visit their website.