The choose your own adventure of board games

Board Game Jam is the brainchild of Adam Clare and David Fono, who, according to Clare (who teaches game design at George Brown College) came up with the idea over breakfast. "As we were eating, we were talking about how board games are awesome - and how we like making them, and others like playing them... so how can we get people who don't normally make games, to make games?"

And just like that, Board Game Jam was born. The first event sold out - in fact, they increased the number of people able to involved due to demand - and there were still interested people who couldn't participate.

"Board games are gaining in popularity again, the industry is very healthy," said Clare, "and I think it has to do with the fact that we have so much other technology in our life, it's kind of nice to take a breather." 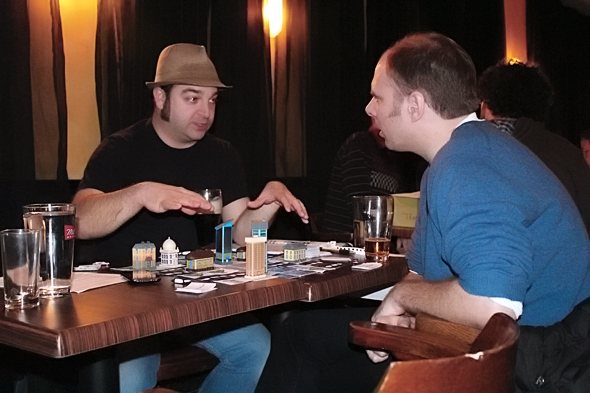 Last weekend teams got a rundown on the basics of what goes into a game, and tips on how to make a successful game. The organizers provided the materials - foam blocks, pieces of actual board games that were gutted, note cards - and let participants run wild with their ideas. Upon completion, the public was invited to come out to 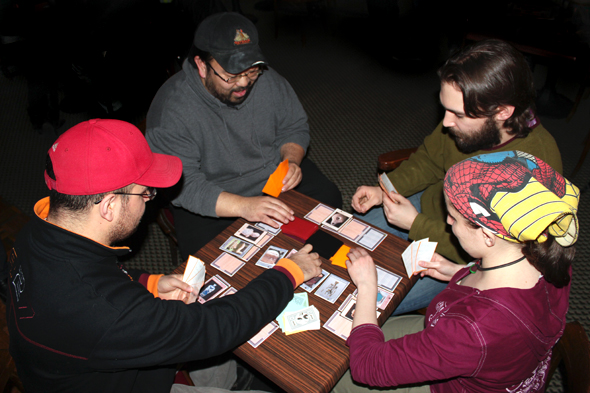 The Rhino to try out the games.

A panel of judges also played the games, and winners were picked for various categories in addition to the overall prize. According to Tim Maly, Founder of Capybara Games and one of the weekend's judges, the panel was looking for a game that somehow met the weekend's theme of "Ancient Civilizations," but which was also mechanically solid, fun, and interesting.The winning game, "The Curator" - designed by Eugene Fong, Daniel Quattrociocchi, Megan Swaine, and Brian Valiquette - had all those elements. "When I sat down at the table, there was a game in progress, and within a few turns I understood what was going on, and started thinking about what strategies I would use," Maly noted.

The Curator is a competitive game, designed around the life of a museum curator. In order to win, you have to successfully trade with other players, and constantly strategize - keeping in mind who you might need in your corner later on. "For something that was done in 48 hours," said Mely, "This is something that felt polished enough where I could see them pursuing funding and successfully pitching the game."

If you missed out on Board Game Jam this time around, don't worry - Clare says they plan to hold another one in the fall. After that, he hopes to make it an annual event in Toronto.