The Toronto FC's quest for a playoff spot in the 2009 season is over, and it all ended with a shameful 5-0 loss in New York - a somewhat befitting, fateful result given the roller coaster of a year they've had.

From a supporters standpoint, this season was full of highs and lows. Here are some of the most memorable and most talked about moments of the 2009 season.

Toronto FC at the end of its third season looks nothing like the team that stepped onto the turf back in 2007. The names Cunningham, Edu, O'Brien, and Sutton all seem foggy like the day after too many Labatt 50s. Did we really suit up a scout last year for a regular season game? This year we saw head coach John Carver quit/fired, to be replaced with Assistant Coach Chris Cummins. And hero Danny Dichio hastily retired mid-season, a move which was never really fully explained. Season three ends with more promise for a consistent roster (at least on paper), with the addition of hometown heroes Dwayne De Rosario, Adrian Serioux, Ali Gerba and TFC's first designated player Julian DeGuzman. 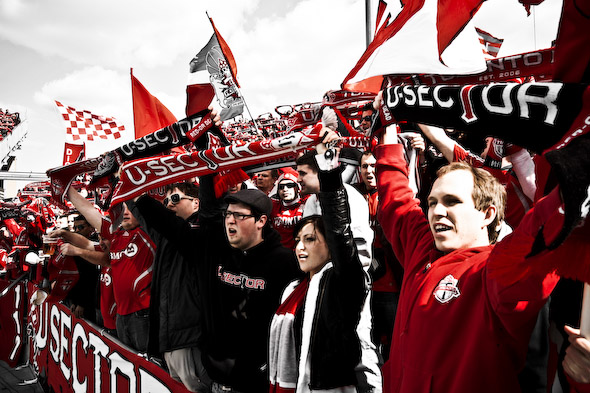 If MLS games were 75 minutes, Toronto would have finished first in the league. Game after game, the south end groans as TFC squanders early leads to the 75th minute curse, suddenly dropping back into a defensive formation that never, ever, ever seems to work out for us. Arms go up in disbelief as we repeatedly watch Chad Barrett approach open nets, only to shoot it wide, or over, or anywhere else but in. Toronto FC pays young Pablo Vitti one of the highest salaries on the team to net us a grand total of 2 goals. There's a term for repeating the same pattern of behaviour over and over again expecting different results. It's called insanity. 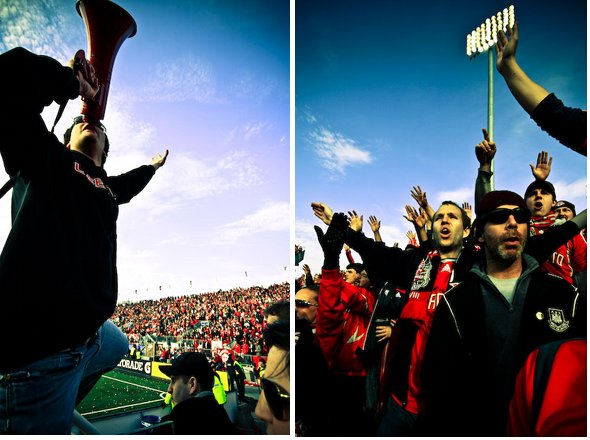 We won our first cup. Hundreds make the trek down the 401 to stick it to our bratty Quebecois rivals, in their own house. But this isn't any old championship win. What TFC does this rainy night in Montreal is nothing short of miraculous. We bunged up our chances going in to the final game with a crushing 2-0 loss to Vancouver, meaning that in order to win the Canadian Championship, Toronto FC needed a 4 goal victory. For a team with finishing problems this seems like a mountain just too high. The boys in red gave us our 4 goals lead, and then gave us 1 more to take it home. 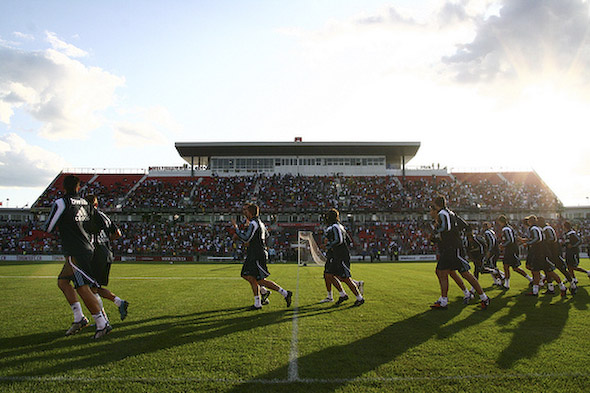 At the end of September, City Council voted unanimously to install a permanent grass pitch at BMO field. Supporters grow excited at the prospect of the team inching closer to the kind of credibility and respect that their old clubs from Europe have, minus the 100 years of history of course. Nothing says bush league more than this artificial surface. But all the complaining and discussion, debate and outcry over the lack of real grass was deemed almost wholly unnecessary when in a mere few minutes while Rob Ford was still on lunch, the motion quietly passed through City Council with no opposition. 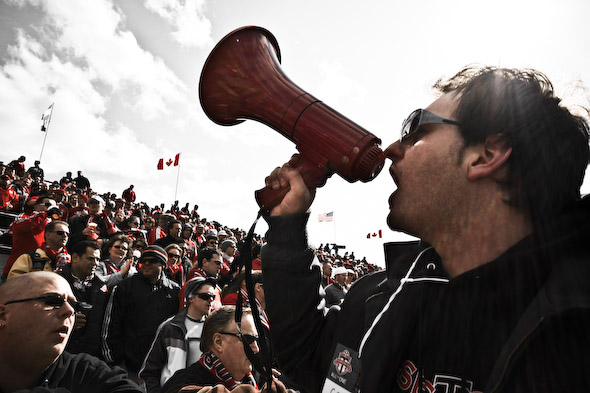 Blame Mo Johnston for an unbalanced roster. Blame Chris Cummins for a lack of leadership. Blame the 11 men that walked onto the rain soaked pitch this weekend in New York, who were unable to pull a win to secure a playoff position and let the last team in the league (playing with nothing to gain) net 5, yes, 5 goals, ending TFC's season for good. They couldn't even string together one measly goal to at least make it look like they tried.

There really isn't any member of Toronto FC's organization that shouldn't be hanging their heads in shame after this weekend's performance. The team and its supporters now face another very long off-season, leaving everyone with a lot of questions. If there's any expectation of improvement for the next season, management will need to provide some concrete answers, before the south stand is full again next spring at BMO field. 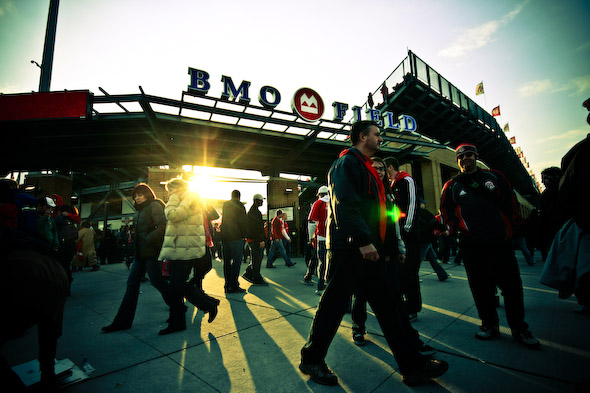 Lead photo by chunchocampeon and shadows on field photo by the Cach from the blogTO flickr pool. Remainder by the author.