"I practiced for three hours every day after school in preparation for this," said Pena after beating out Vancouver native Pablo Villalta in the final match.

Kneegrab, Shin Spin and Around the World were among the tricks performed by 16 finalists, culled from regional battles in Montreal, Vancouver and Toronto.

Kids as young as 13 wowed the crowd with their freestyling soccer ball skills, balancing the ball on their faces and doing acrobatic tricks with the ball that at times appeared to defy gravity.

Each round featured three minutes, two players and one ball. Possession of the ball had to alternate between players every 20 seconds. Pretty much anything is fair game, aside from using your hands and arms. 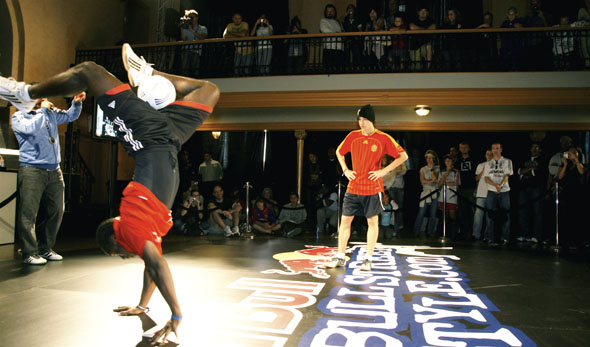 Some of the more impressive moves were made by Dennis Thompson of Mississauga (pictured above). But he was eliminated in the second round by Pena.Too bad this contest wasn't scored and decided by points, as Thompson clearly had the moves to compete among the best.

Elimination-style one-on-one bouts were judged on flow of control, style and creativity by a panel of judges that included Rohan Ricketts of Toronto FC, James Sharman of The Footy Show and ET Canada's Rick Campanelli.

Unrelated to the event, but perhaps notable to fans of Campanelli, you can bid on an ET Canada backstage pass for two plus meet & greet online auction for Rethink Breast Cancer.

The Red Bull Street Style World Finals will be held in Sao Paulo, Brazil on November 18. Pena, when asked where he's from said he's Spanish and from El Salvador. "But I was born in Toronto."

Pena said he'd only been doing freestyle soccer for a year and eight months. Do Toronto and Canada proud in Sao Paulo!

Check out the action in the photo slideshow below:

And here's a little video that shows off freestyle soccer in action: