The Toronto FC played to a draw against the Montreal Impact Tuesday night, failing in their bid for a Champions League berth. But before my companions and I reached our seats, thanks to logistics and camera policy, the TFC had pretty well lost us as fans.

This was the first TFC match for any of us, so naturally we were pretty excited. And as much as I prefer using transit, it made the most sense for us to drive and park. Despite being on Lakeshore, east of Jameson, with 45 minutes to start time, we didn't get to our seats until 35 minutes into the first half. 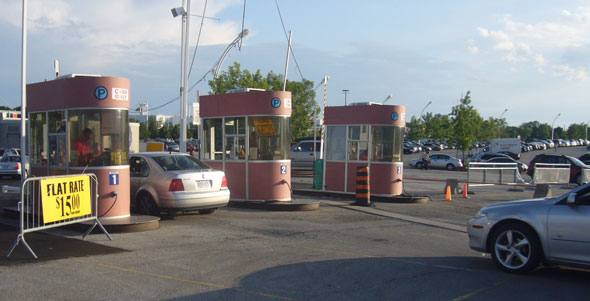 I know, we should have arrived earlier. And yes, we should've read the rules more carefully about cameras. But by the time we made it past the stadium and toward the parking lot (4 minutes into the game) it was obvious that there were absolutely no parking officials helping direct traffic. Putting a crew on Lakeshore also could have diverted people to Ontario Place to avoid the long backup.

To make matters worse, the large parking area between BMO Field and the Direct Energy Centre was filled with activities that will be in full swing for Thursday's MLS All-Star Game. In other words, of all games to have some extra parking support, this was it. Alas, we didn't make it to the gate until 20 minutes into the game, after going through the only money collector booth (of three with people) that was in operation. 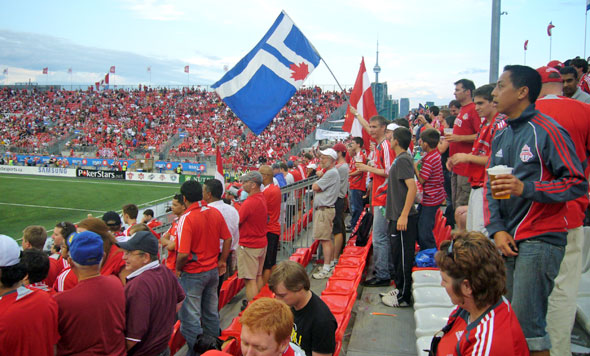 We had been diligent to double check the umbrella rule, noting that they are indeed prohibited, and so we all packed a rain jacket just in case. What we didn't notice is the fuzzy rule about cameras that mentions cameras with lenses under 75mm are ok and professional cameras are not, but that "The BMO Field camera policy is different for each event."

So we weren't expecting to be accosted by underpaid and overworked security personnel about our not-very-professional Canon Rebel XTi with Sigma 18-200mm lens. Even if somebody thought that was professional (and compared to what I saw the professionals using alongside the field, it would be a stretch), how anybody will use that to get a commercially-viable photo from the 13th row of section 115 is beyond me.

We made this point rather emphatically and it became clear we would have to use the Fan Service desk to check the camera, which naturally raised questions about liability (they claim none). The security and service personnel were just doing their job, but they certainly weren't giving us service with a smile, although to be fair, we were a bit raw from the parking situation, so perhaps being a bit more argumentative than usual.

Yes, all worked out, other than not being able to take as nice a photo of the game (hence the lead photo of the story). But the notion that anybody who goes out and buys a regular digital SLR is suddenly in the same category as a professional photographer is ludicrous. I simply cannot fathom TFC losing any money because they are suddenly overrun with amateur photographers selling game pics - they are too busy chanting, cheering and telling the opposing goalie he's got a camel toe.

And large flags (on flag poles) are allowed, and effectively, so is throwing just about anything you can fling onto the field. So what's the big deal with a camera? We bring it to Jays games, restaurants and so on. I've never run into this sort of rule at a sports event. It's one thing, like most concerts, to prohibit all cameras. But to try to draw a fuzzy line in the sand is unfair.

So for us, having watched the anemic TFC offense keep the ball on Montreal's side for virtually the entire second half and get nothing to show for it, and having missed the first two (and only) goals of the game trying to park, we found ourselves more than willing to say we'll miss the rest of their goals, too.