Never mind Scrabulous, the real thing has come to town.

Players from across the country are gathered in Toronto in the opulent Austin Gallery on the 12th floor of 1 King St. W. to vie for the title of Canadian Champion. There's a total prize pool of $12,150 including a top prize of $7,000 and the right to represent Canada at the 2009 World Scrabble Championship.

Entrants include the winners of all five past Canadian championships. Among them are three former world champions, including 32-year-old mathematician Adam Logan, pictured above (right) before his first game of the tourney.

You can follow along with the live coverage online, thanks to tourney director John Chew. If you're really keen, you can observe some annotated games from the top tables, allowing you to follow along play-by-play at home. 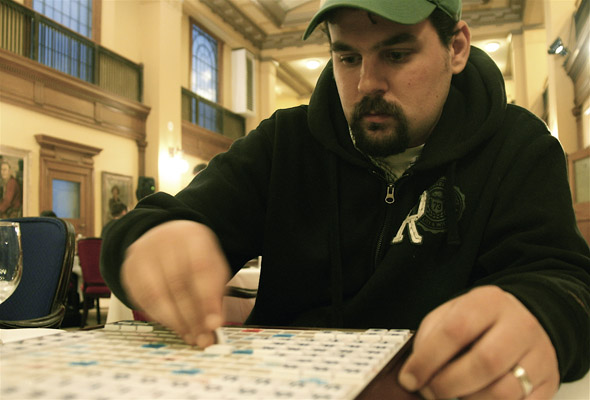 Fifty-two players are competing this year, instead of the usual 50. Two wildcard entrants from the Early Bird tourney (in which I participated) will be added to the other experts who qualified by peak tournament rating. This includes one under-18 player and the highest-placing adult entrant from Friday's Early Bird tourney.

Each participant will play 18 games, with a best-of-five game head-to-head during the finals on Monday. 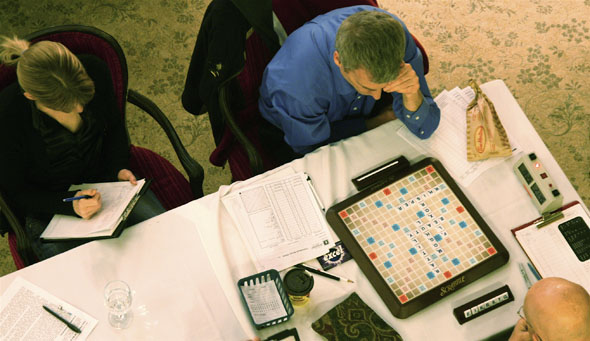 After round nine, leading the pack with an 8-1 record is another former Canadian and World Champion, 44-year-old computer programmer David Boys (pictured above in blue). In second is 62-year-old musicologist from McGill University, Joel Wapnick, with a 7-2 record.

If you'd rather observe the action-packed tourney live in person, you can head on up to the balcony and observe the 26 games in progress. 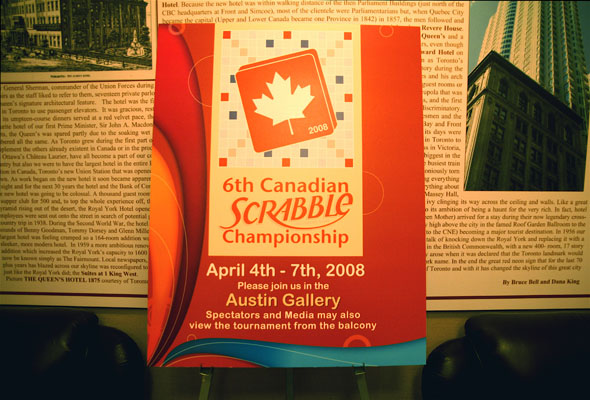 If you can't make it to the event, or would rather be playing Scrabble yourself, check out the weekly Scrabble in the City club on Monday night, where you can throw down tiles over drinks at a pub with like-minded amateurs.