His opponent, 44-year-old computer programmer David Boys, not missing a beat, deadpanned "Give up yet?"

Overcoming a 221-point deficit at this point was insurmountable, and Logan prevailed 492-354. It was a hard-fought battle, with Boys overcoming a two games-to-none deficit to force a fifth and final game.

"This is becoming one of my very favourite events," said Logan after the tourney win.

Logan won a trophy and $7000 for his first place finish, claiming his unprecedented third title.

"One of my most challenging games of the tourney came against Maxim Panitch, who caught up and won by three points because I played a phoney," said Logan. "I played HOOPS, hooking an S onto the front of CURRIERS."

I found this story particulary amusing because Panitch and I discovered that phoney hook in a tournament game about three years ago, when I made the phoney hook and Panitch challenged it off. 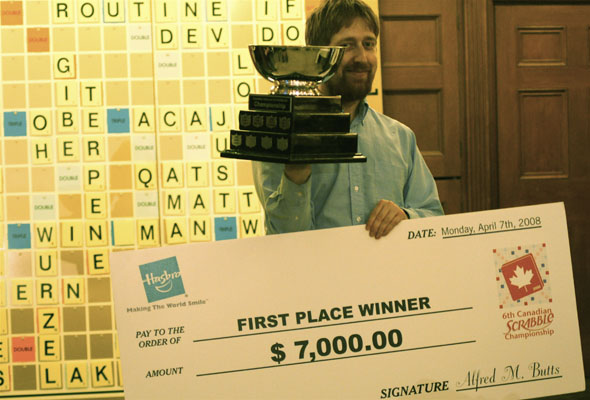 Phoneys are part of the game. But with top-level experts like Logan and Boys, they are usually only played in a desperation move or in a moment of absentmindedness.

Some of the thousands of valid words that they cram into their Scrabble lexicon can get confused with words that are only good in a different word source, such as the one used in international play.

"My favourite word I played in the tourney was EXODIC, even though it's not good in our dictionary," said Boys after playing the word in their final game. That play may have cost him the championship. 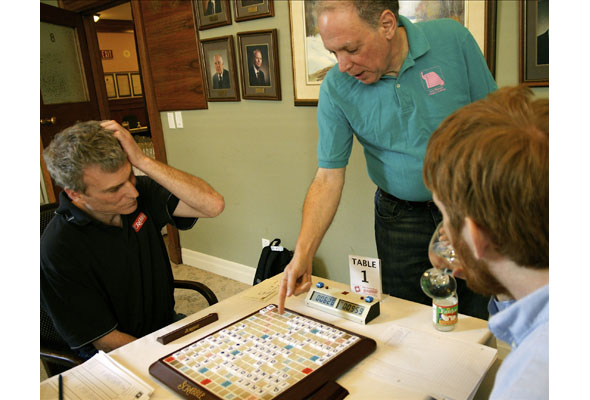 After game three, Boys (left) reacts to Joel Wapnick, 61, pointing out a phoney word -- LEAVENERS -- that Logan, played during game three of the finals. All three competitors are past World Scrabble Champions.

Wapnick, who placed third in the main tournament, cautioned Boys not to challenge any of Logan's words, "because he almost never plays phoneys," says Wapnick. You could say he chose the right time to play his phoneys.

Tonight the Scrabble fun and games continue with the Scrabble With the Stars event, hosted by Colin Mochrie and Deb McGrath.

Other celebrities will include Sarah Polley Sharon Hampson and Bram Morrison from Sharon, Lois and Bram, and Michael Burgess, joining in the fun to raise money for Performing Arts Lodges Toronto.