Crossing Spadina earlier today, I spotted a streetcar wrapped in the kind of advertising that's ordinarily reserved for cellphones or vacations to the Bahamas.

I'm not usually a big fan of streetcar-wrapping ads, but I had to admire this one for the Toronto FC, Toronto's new MLS soccer club. Not only does it advertise a local sports team, and not only does it (almost) keep the same red colour as the streetcar, but it is also one of the first advertising campaigns I've seen that directly engages Toronto's multiculturalism in a smart way. 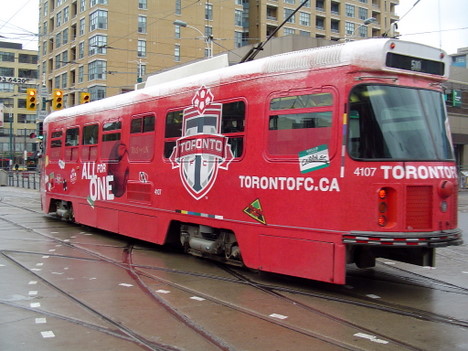 If you look closely at the top picture, you'll see familiar Toronto neighbourhood names plastered all over it: Chinatown, Bloor West Village, Kensington, Portugal Village, and Little Italy were the ones I was able to read before the streetcar went through the intersection. The tagline, "All For One," also appears in a few different languages, including Spanish, French, and Portuguese.

That tagline is about as "soccer" a phrase as I can think of, but it also makes it sound like all these different cultures, usually warring with each other in international soccer competitions, can get behind this one team. Even though Toronto always boasts about its multiculturalism, it's rare to see such attempt to unite them all under one cause, even if that cause is to further inflate the wallets of MLSE.

Besides, if the team is half as good as the food at the stadium is reported to be, it'll be well worth going to a few games this summer.