It was a sight I will not soon forget.

A dozen-plus androids stormed the Ontario College of Art and Design, angered with the crafty humans that created them asking for, nay, demanding that we bend to their wills if we had any desire to survive as a species.

Unbeknownst to the metallic marauders, however, their maniacal quest for power would be their downfall... 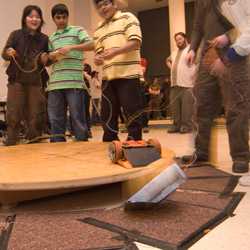 Soon after the college's takeover, the robots started to turn on each other. Many individual robots thought (if robots can indeed think) that they should be in charge of the new "Earth" they were about to create. It what can only be called a savage display of wits, courage, and wanton destruction, the robots settled on a sumo contest.

The winner would be crowned the Robozuna and would lead the humans down a fiery path towards a brutalized version of Earth befitting of the devil herself. Below, ye shall find photographic and video documentation of the events as they unfolded.

Pretty in Pink makes awesome comeback, and shows off with the hydraulics! 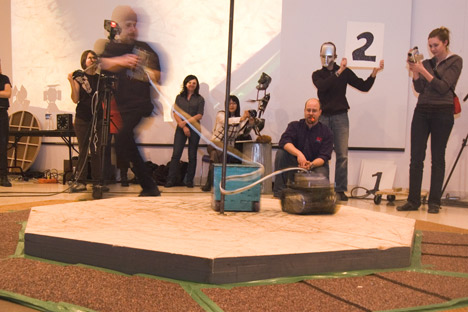 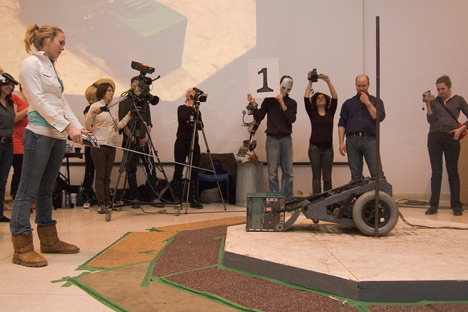 After Baby Hulk fell and the sole remaining robot was crowned Robozuna, the humans took advantage of the robot race's dwindled numbers, reclaiming the Earth as their own. On this day, March 3rd 2007, we won.

But how long can we hold out before the robots return with greater strength and an army thrice the size of ours? We may never know, but we must never give up hope for a better tomorrow...

Damning evidence of the destruction by me. Courage is my middle name.