If you're like me, and the team you normally support is planted squarely at the bottom of the table with the impending reality of relegation pretty much academic at this point, you're probably giddy with anticipation at the prospect of employing the highly underrated cheer of 'go on my son!' while watching some (hopefully) high quality footie in a venue slightly more well ventilated than your local pub to keep you occupied for the approaching year--or at least for the summer.

In addition to selling out it's 14,000 season tickets this year (who knew there were so many football fans in hogtown jonesin' for a glimpse of Mr. Posh spice when he roles into town this summer) Toronto FC has just revealed their 2007/08 home strip.

Maybe it's just that Adidas designed the kit and as such it bears an...ahem...'striking' resemblance to a cross between the French national kit and the Bayern Munich one from a couple years back but on the whole it's not too shabby.

Leaving aside for the moment any conflict in sympathies arising from one prominent Canadian city's football franchise sporting the moniker of a financial institution that includes the name of another prominent (and in some sporting circles despised) Canadian city,BMO has their name prominently displayed across the front of the Jersey which seems to indicate a monopoly on team sponsorship. I've been scrutinizing the colours on my monitor but can't decide whether the accent colours are grey or blue in which case they'd actually be using BMO colours which seems slightly over the top to me.

On the whole it could've been worse. Have a look at it here sported by 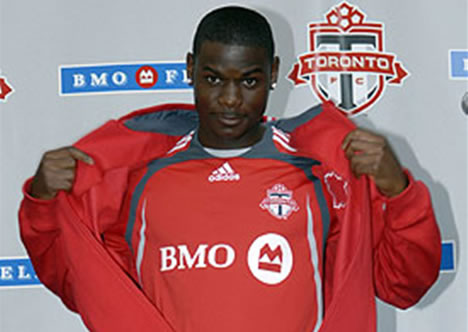 As well dressed as the team will be for their inaugural season, it wouldn't really be proper football if we didn't have some team cheers and songs to go with it, which brings me back to the name...dunno about y'all but I'm finding it extremely difficult to adapt the tune to 'Go West' to include 'Toronto FC'.