Santouka Ramen is yet more proof that the Toronto ramen craze is at a steady boil. A Japanese original dating back to 1988 with many international outposts, Santouka is happily profiting from the Toronto hype-machine that has hungry trend-seekers waiting in the cold for hours to sample their famed recipes. 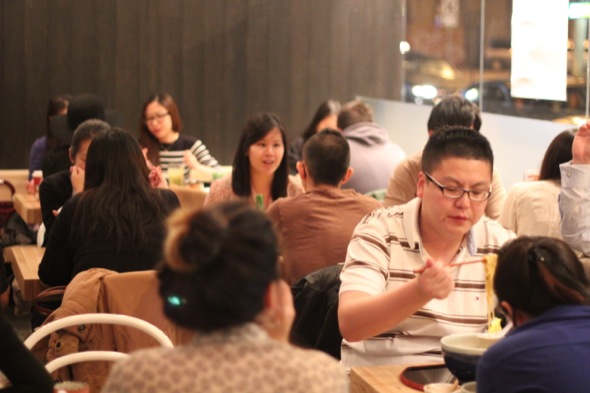 Never a supporter of a line myself, I opted against the wait on my first two attempts to dine there. But on our third try, my friend and I scored a table after a 20-minute wait. Note: by the time our order had arrived there were eager diners stretching the length of the large front window, peering inside and Instagramming in an attempt to quell their lust. 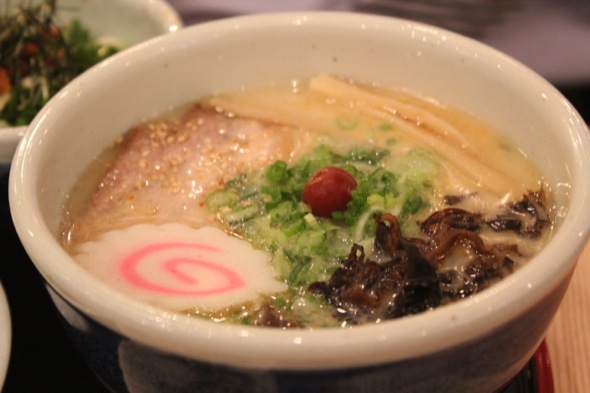 The staff were friendly and the manager, Hatsuki, thanked us for waiting patiently. At least good customer service didn't come with a delay. Their Toroniku Ramen (pork jowl ramen, starting at $15.90) is the specialty of the house--served with jelly ear mushrooms, bamboo shoots, green onion and their signature pork jowl (cheek) as a side to the rich, creamy tonkotsu broth and bouncy ramen noodles. 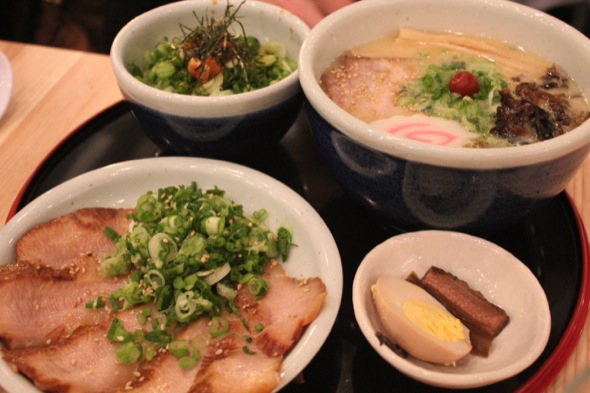 We opted for a couple of their combination sets which include a scaled-down bowl of either Shio (salt), Shoyu (soy sauce), Miso or Kara Miso (spicy miso) ramen, as well as a rice bowl and sides. As an addition, we made sure to sample the renowned Toroniku ($6.90) separately. 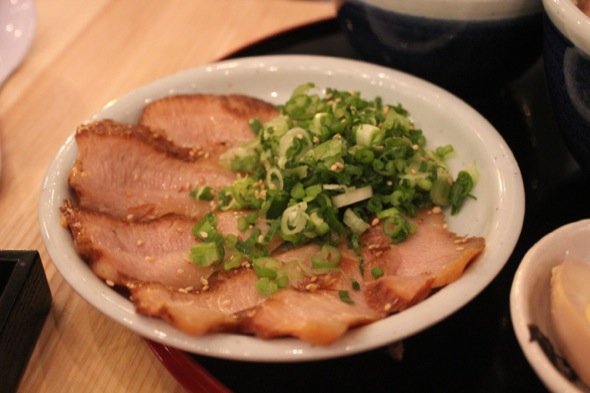 Simply fanned out with a hefty pile of shaved green onion, the Toroniku was a serious hit. They wouldn't give up the specific secrets behind their preparation of the dish, but they use only the "rarest of pork cheek" comprising only 200-300g of meat on each pig. The meat is simmered over many hours so that it melts on the tongue, and yields its array of deep, sweet flavours. 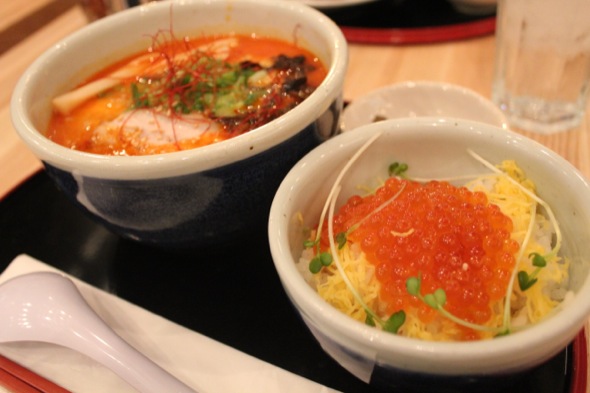 My personal combination was comprised of Kara Miso ramen, Ikura Gohan (salmon roe on rice), and a small side of half a soft-boiled egg and a few strands of Shibazuke (Japanese style pickle, $16.90). Of course, the focus is on the soup itself. The spiciness of the broth is a nice change from the typical sweet and salty that comes along with most other tonkotsu preparations, and the soup is velvety nonetheless. 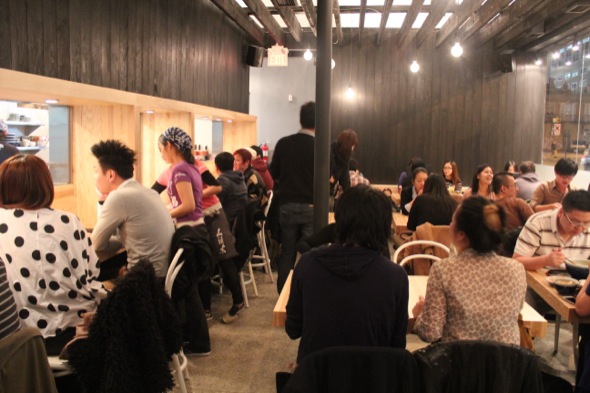 The noodles are crinkly and hold the flavour of the broth nicely. The jelly ear mushrooms are cut to precisely 3mm thick (according to the Santouka website), and the bamboo shoots add texture and freshness to the abundance of salt and spice. 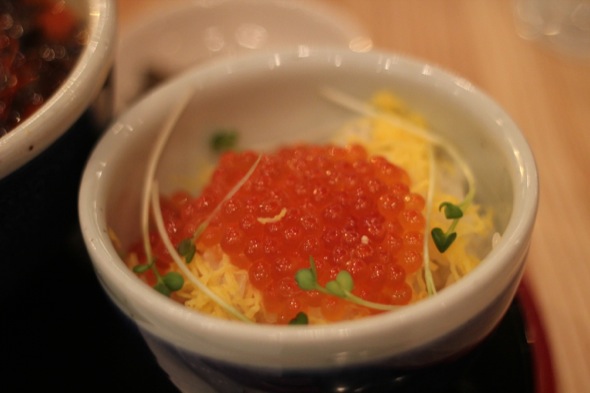 My side of Ikura was delicate and delicious. The light, juicy fish roe was fresh and as pleasing to the eye as it was to the palate. The only disappointment in the combo was the soft-boiled egg. Though well-seasoned and marinated, it was overcooked and more akin to something you'd grab out of the fridge at the grocery store than order for an additional $1.60 at a restaurant. 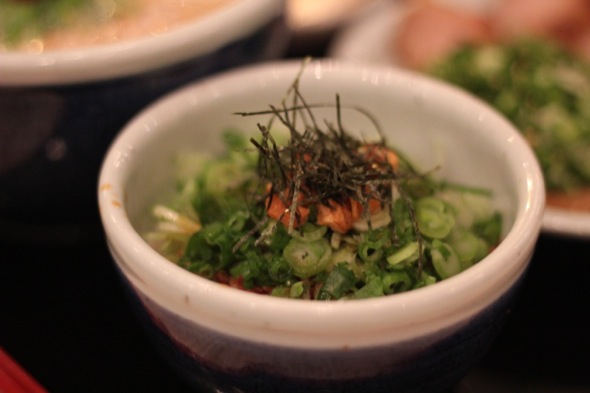 My friend's combo featured the much lighter Shio Ramen, Negi Meshi (rice topped with dried bonito, green onions, and soy sauce) and the same small side dish ($14.50). For those who don't like the oil content or fattiness of a miso or shoyu, this is likely the best option. Also, included only in the shio ramen, is Santouka's signature topping--pickled plum--which offers a sour taste and somewhat crunchy texture. I don't care much for bonito, but if that's your thing, then the fishy flakes are nicely done and pair well with the green onion and seasonings. 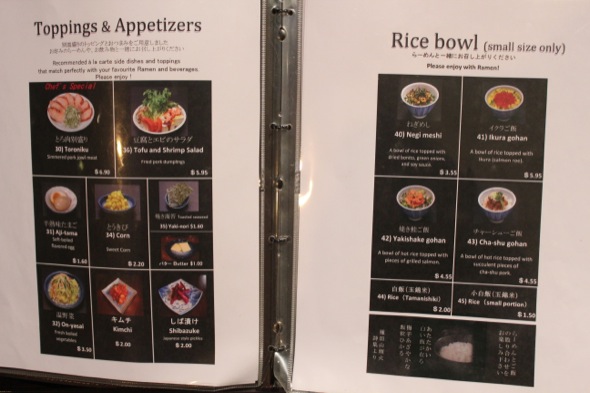 So, between the buzz, the somewhat ridiculous lineup, and the potentially impending blizzard season, is it worth it? Well, it's pretty damn delicious--I can't argue with that. But with all the other equally satisfying options around the city, I'll be flocking towards what's convenient and quick until the steam subsides and everyone is seeing a bit more clearly. 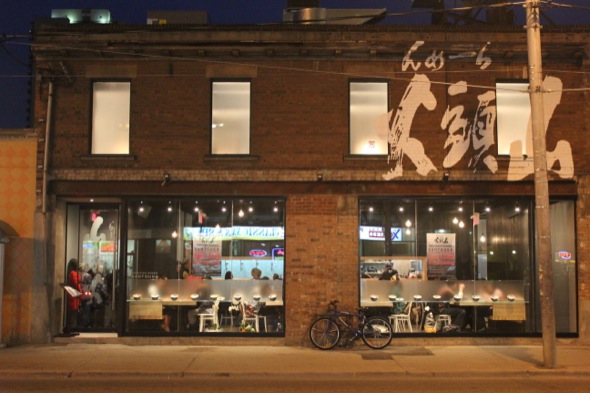