Michael's on Simcoe is an ideal place to dine if you enjoy the finer things in life - namely, a top-quality steak or an expertly made Italian dish (it also helps if you have deep pockets and/or a corporate expense account to play with).

The restaurant recently celebrated its second anniversary, and two years in, it remains a celebrity hot spot during TIFF, with the likes of Keira Knightley, Julianne Moore, Diane Keaton and Morgan Freeman making appearances here this past September. There have also been a few additions and tweaks since this subterranean space first opened, some of which include a new sidewalk patio and an update to the menu when Derek von Raesfeld (formerly of Mistura ) took over as executive chef late last year. 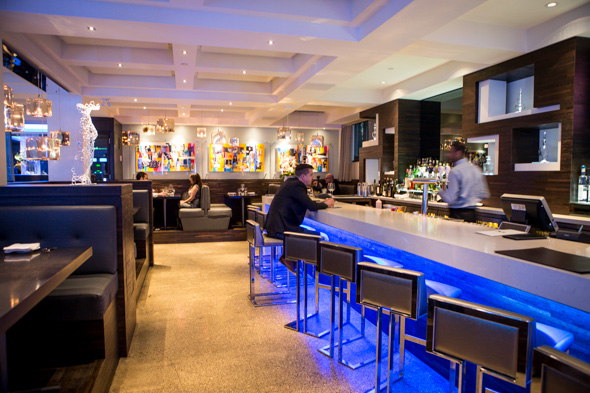 Owner Michael Dabic, who was a longtime general manager at Harbour Sixty Steakhouse prior to opening his own place, wants to offer patrons a modernized version of a steakhouse that also serves contemporary Italian cuisine. He and von Raesfeld, who learned his trade at Michelin-starred restaurants in Italy, handpick the top 2% of USDA prime beef in North America and butcher it in-house, and some of that meat goes into a custom-made dry-aging chamber from Italy that can be seen from the dining room. 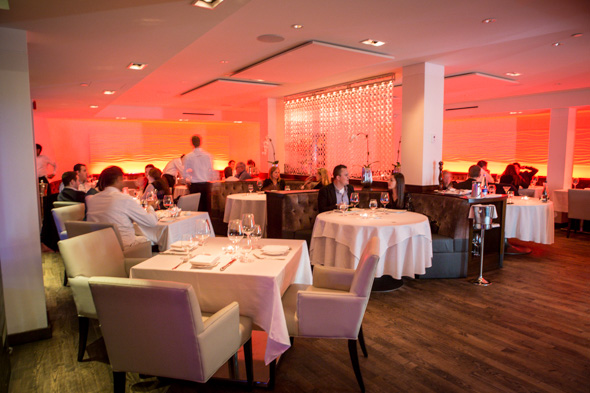 When dining, try to avoid gorging too much on the addictive bread baked in-house, as well as the olives and dips served along with them - save room for the rest to come. 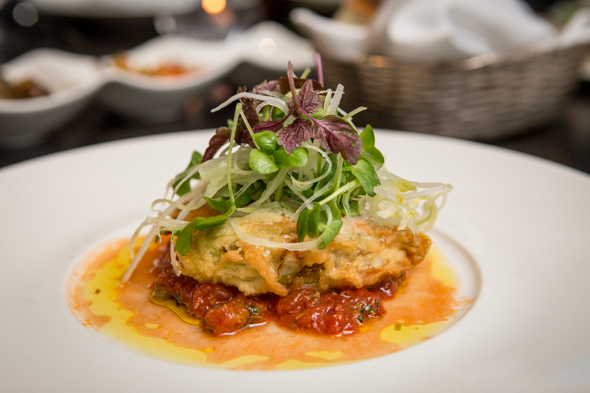 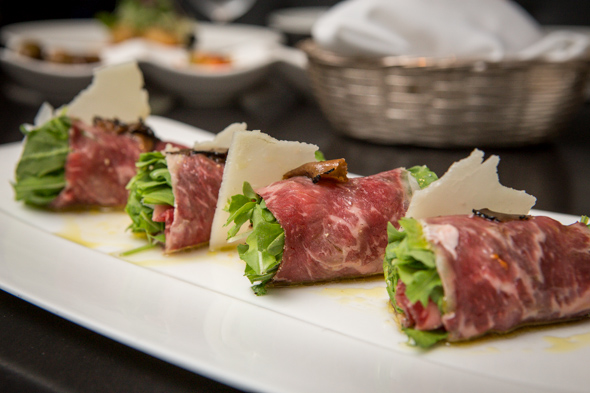 From the crudo section of the menu, there is carpaccio di manzo ($22), thin slices of raw USDA dry-aged prime striploin beef rolled with some arugula and topped with shaved parmesan and lemon truffle dressing. 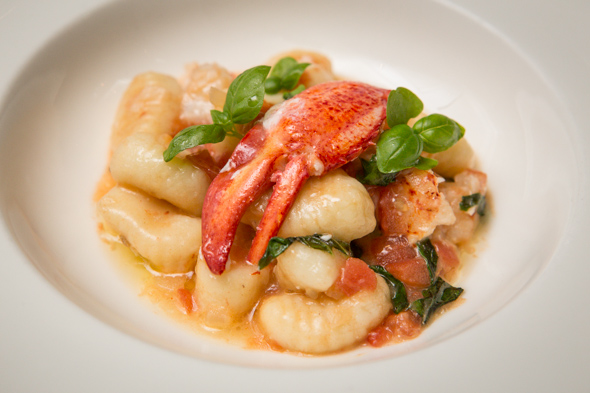 If that isn't decadent enough, aragosta gnocchi ($28), chewy, fluffy pillows of pasta with fresh pieces of lobster, spiced tomato, garlic, lobster stock and fresh basil should up the ante a bit.

On to the steak: various cuts and types of beef are available, ranging from an 8-oz Wellington County Premium Canadian Beef striploin ($36) to a 12-oz dry-aged U.S. Snake River Farms Wagyu Beef striploin ($145). We try a 26-oz dry-aged USDA Prime Black Aberdeen Angus porterhouse ($79), and it's a perfect medium-rare (the way a steak should be served). The meat from the tenderloin side melts in my mouth and my dining companion claims it's the best steak he's had in his life. It's cut tableside and served with whatever sides you decide to order. 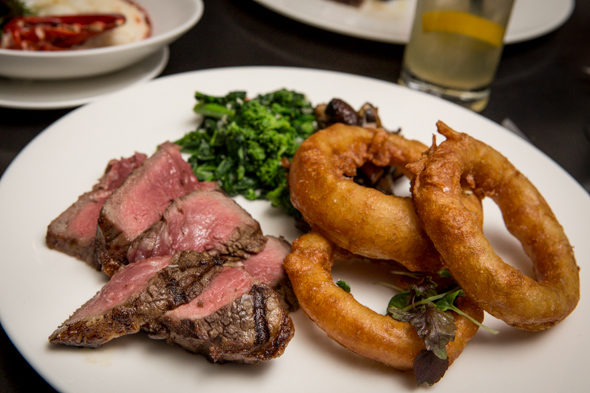 A tower of Krombacher onion rings ($10) are Flintstone-like in size, while chopped rapini with anchovy and chilli ($12) and sauteed mixed mushrooms ($16) are arguably healthier choices to accompany your hunk of meat. Or you can promise yourself you'll work it off at the gym later and go all-out surf and turf by adding a half lobster tail and claw ($24) as a side. 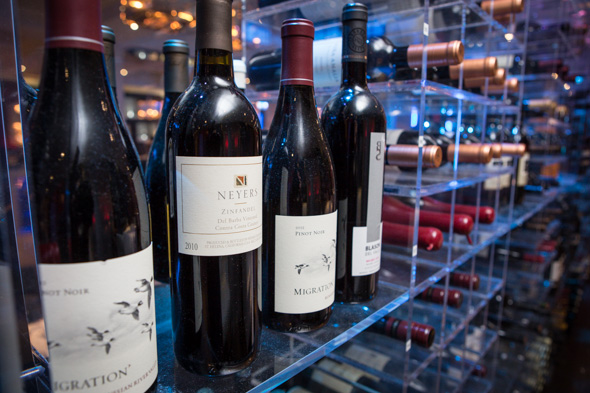 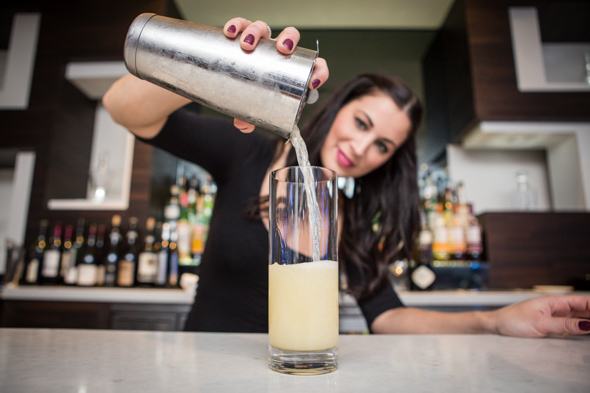 It may be gauche to conclude with talk of toilets, but ladies, it's worth a trip to the washroom facilities here if you've never experienced the joys of Japanese bathroom technology. Heated seats, bidet functions and automatic sensors are just a few of the wondrous features you'll discover. Clearly, Dabic means it when he says he wants to challenge the overly masculine ambience of the traditional steakhouse - and I have to say, I approve. 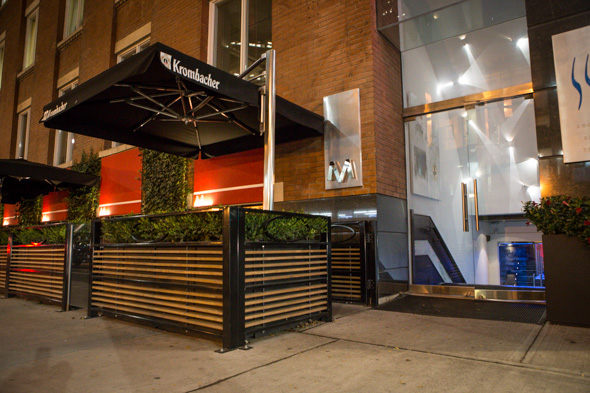