Hole-E Burger's first Toronto and second-ever location (the original is in Bolton) can be found on a slowly gentrifying commercial stretch of Coxwell Avenue in East York. The space was formerly a TD Bank, and architect Daniel Johnson, who is also responsible for many Starbucks locations in the city - including the one a few doors down - has given the gourmet burger joint the same trendy, casual feel.

Franchise owner Stuart Balaban tells me the strategy is always to open near a Starbucks, as it's the coffee chain's clientele that Hole-E hopes to attract. 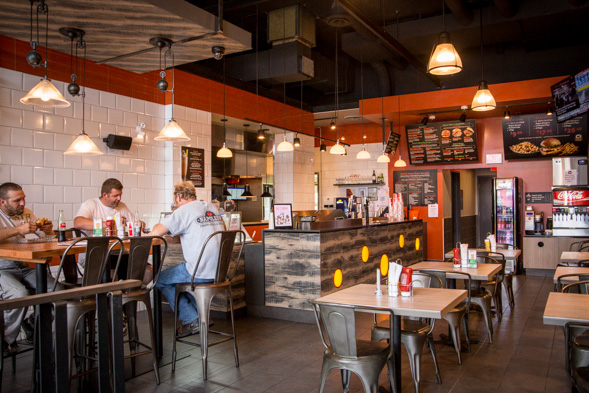 The brand's catchphrase is that its burgers are "all about the holes," and Hole-E's gimmick is that it punches holes, using a custom-made three-pronged contraption, into its Certified Angus Beef burgers while they're cooking on the flat-top grilll, allowing the flavours of the sauces and cheeses to seep right into the patty itself. You can watch as executive chef Claudio Lanza cooks them to order behind the counter.

Most popular on Hole-E's menu of specialty burgers is the Heart Attack ($9.99), an Angus patty topped with pulled pork, applewood smoked bacon, chili, coleslaw, BBQ sauce and cheese on your choice of an egg or whole wheat sesame bun (gluten-free for $0.75 extra). It has some serious height and definitely requires the help of a skewer to hold it all together. 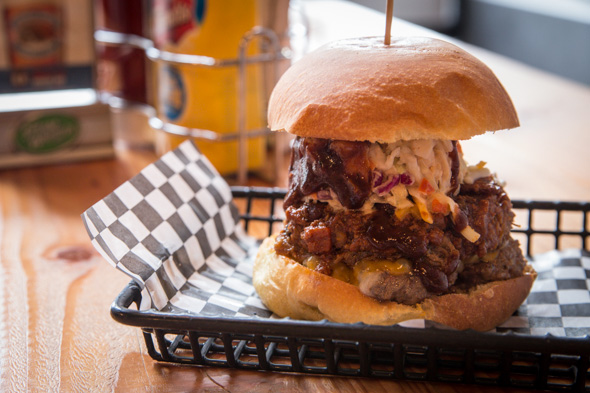 Another signature item is the Hole-E Skirt ($8.99), which is a burger with a mound of shredded mozzarella and cheddar added to the hole-studded patty while it's being cooked so that some of it melts through to surround the meat and create a crunchy cheese "skirt" topped with applewood smoked bacon. 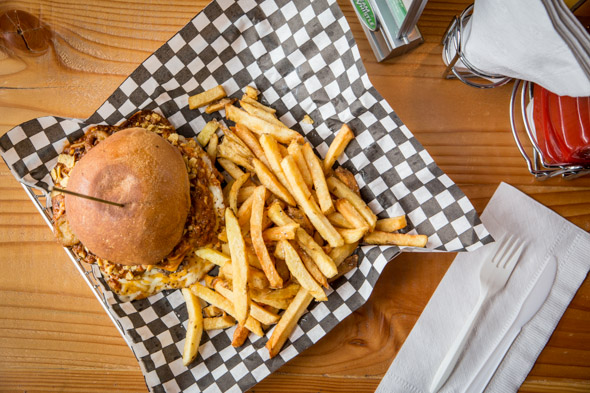 My companion and I try the Hole-E Nacho ($8.99) and some hand-cut fries ($2.99). This unwieldy Tex-Mex-inspired creation contains an Angus patty with melted cheese and its accompanying skirt, plus homemade chili and fried jalapeno rings between an egg bun. It's messy to eat but the burger is flavourful, and the crispy, not-too-spicy fried jalapeno rings are addictive.

The fries, however, are underwhelming and entirely unmemorable next to the burger. Perhaps they'd be better as a poutine ($4.99 regular, $7.99 large), drowned in cheese curds and housemade gravy? 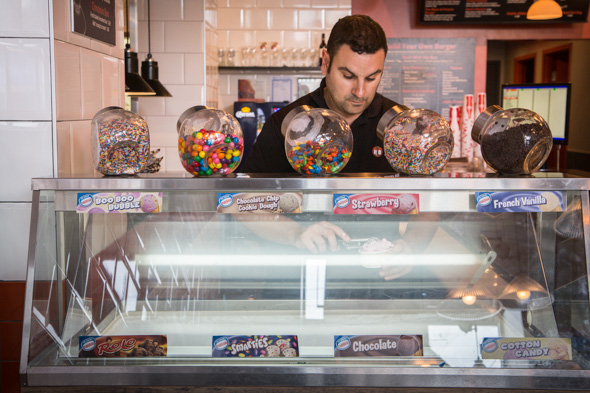 For dessert, a selection of Nestle ice cream can be scooped onto cinnamon buns, between cookies for ice cream sandwiches or mixed into thick milkshakes. 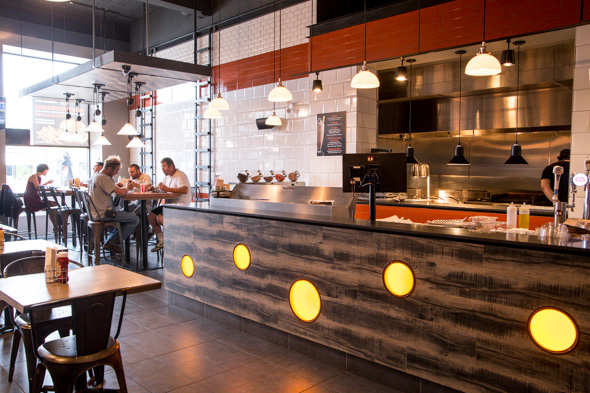 The joint is licensed, with four beers on tap (Stella, Keith's, Creemore, Steam Whistle), bottles of Heineken, Corona or Stella and Jacob's Creek wines. Hole-E offers specials on weekdays like $5 pints/bottles and $5.99 glasses of wine from Monday to Wednesday, as well as "kids eat free" Mondays and Tuesdays (they can drink Pop Shoppe sodas while you imbibe). 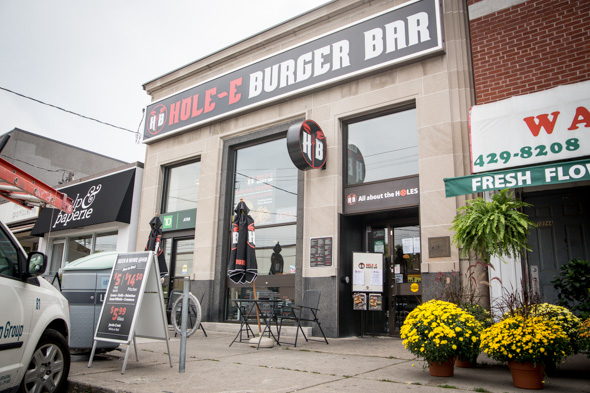