Ebi Sushi Izakaya joined Bloorcourt's healthy roster of bars and restaurant this past fall, in a locale known for its sharp pastiche of galleries, businesses, personalities, and styles. There's something for everybody and even a few somethings for nobody, some would reckon, but all add up in some madcap way to its indisputable energy and appeal. Gastro enthusiasts have the neighbourhood on their radar as a mecca for eating destinations that are as affordable as they are quality and ethnically diverse. Local favourites such as Banjara , Nazareth , Dosa Mahal , and Sardinha are some of the few that have people flocking in from all over for dine-in or take-out.

But even with nearby Mazz Sushi and its loyal following, you'd tend not to associate Bloor and Ossington with Japanese fare. While Ebi won't affect this perception drastically, now there's competition that can shake a chopstick to Mazz quality-wise, and another reason for cheap-sushi junkies to head west of the Annex to get their fix. True, it's a bit pricier, but with the noticeably higher quality to price ratio you're getting, not to mention their outstanding service, you'll probably join the already converted. 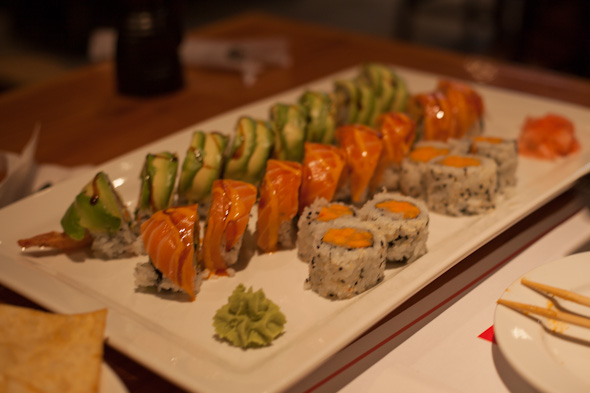 In terms of portion size, the Annex Big Sushi would be the go-to yardstick. Not for the faint of heart, the spicy scallop and salmon roll ($9.95), green dragon roll ($8.95), and yam tempura roll ($3.95), were positively enormous. Upon inspection, the rolls, especially the green dragon with its sheath of thin slabs of avocado, and shrimp tempura, tobiko, mayo centre, were visibly fresher, more lovingly crafted, than your average Annex counterparts.

For my own preference, though, I found the pieces big to a fault. Roll end pieces, in particular, inspired a mixture of shock and awe. You could brave unpleasantly huge pieces in one go, or suffer unwieldy and messy consequences if you bit the pieces in half. Either way, grace was put by the wayside while we strategically contorted our jaws, cheeks ballooning up like chipmunks. The success rate was spotty. That's why, in keeping with decorum, I'll always side with moderate-sized rolls. Let's concentrate on the flavours, please.

For value alone, however, I'd understand if the mountainous stock is a draw. Purveyors of the aforementioned Annex joint will certainly be pleased, and for closer to classic sizes, in future I would opt for basic maki rolls such as their Hamachi negi ($5.95), spicy tuna ($6.55). Even more of a safe bet would be their two-piece orders of nigiri sushi such as salmon ($3.85), tamago ($3.85), and unagi ($5.45). 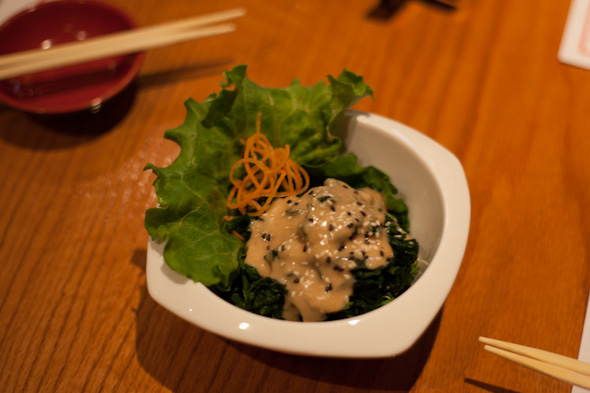 Appetizer portions were similarly nothing to scoff at. The horenso goma ($5.95), a salad of cold spinach and sesame seed sauce, was a decent size if not a mite underwhelming. For its price point, the ebi katsu app ($6.95), a fan of breaded shrimp, fried until golden, was worth retreading the familiar terrain. 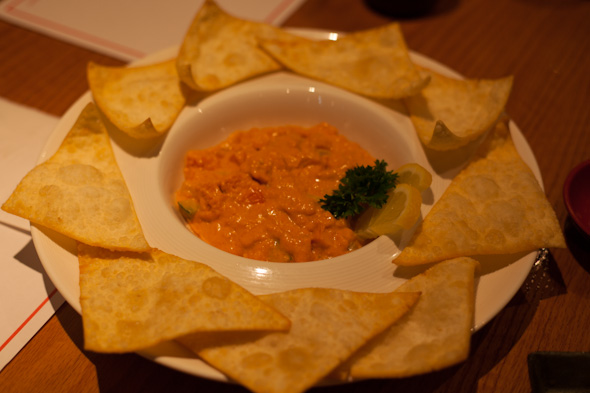 Finally, the spicy sashimi nacho platter ($9.95) was quite generous with its homemade hot sauce mixed with healthy chunks of raw salmon. Slightly disproportionate to the number of nacho skins that come with the platter, you'll be tempted to scoop the remaining mixture onto whatever rolls you have handy, so long as you don't fear the wrath of the sushi gods for committing such blasphemy. 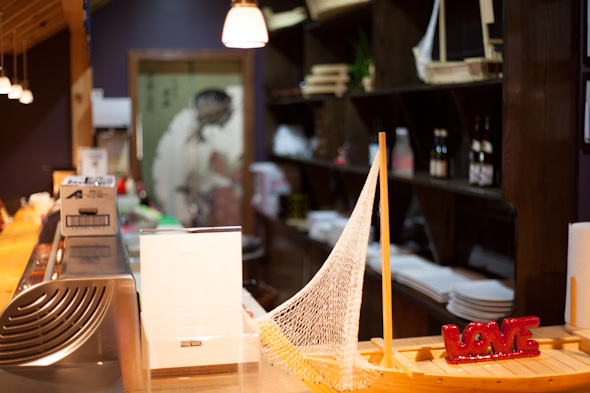 Be warned now, though, you won't find here any frenzied signage, tatami mat seating, long communal tables, or the wild uproar of call and response between patrons and staff. Which brings me to my only standout gripe about Ebi: they really have no business calling themselves an izakaya.

Having been to izakayas in Osaka, Kobe, and Hiroshima, as you'd expect, they are not uniform in look, demeanour, noise volume, or eats. So I wouldn't necessarily say every izakaya need be as boisterous and animated as Guu might lead you to believe, but in terms of design, ambience, and menu selection, it's still leagues closer to an authentic izakaya experience than Ebi. 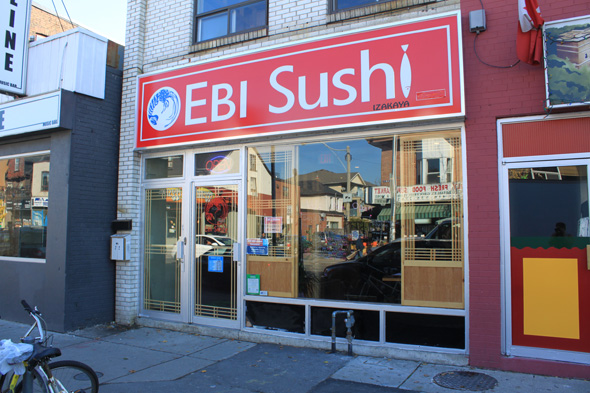 A few greasy menu choices aren't enough. Sushi is their mainstay, and their drink selection isn't extensive as you'd think. Still, misleading name aside, if you're looking for your dollar to go a little further for your next sushi occasion, you may soon find yourself heading to Bloorcourt.