Bolt Fresh Bar recently opened just steps from The Drake Hotel and already their smoothie line-up is near flawless in terms of flavours and consistency. From my first sip of the Chocolate Thunder ($8), I thought I met my match, so pleasant was the whipped froth of dark ChocoSol , organic peanut butter, raw cacao, banana, flax and chia seeds, agave and almond milk. 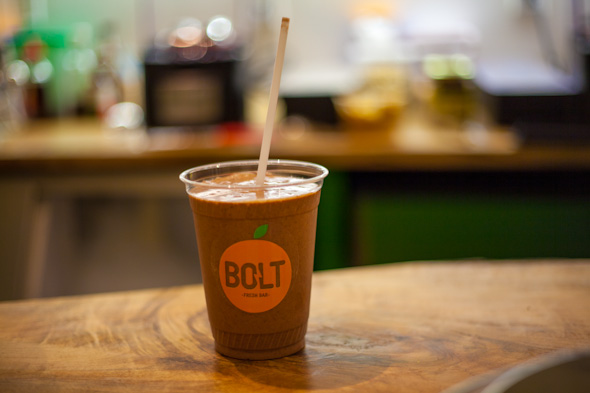 But to my surprise, the Almond Delight ($8) actually upstages the former. Its arrangement of maca root, cinnamon, almond and maple syrup notes make for a subtly rich profile which is malty, bitter, and sweet all at once. No complaints either about the Berry Blast with its antioxidant and electrolyte jolt of berry medley, coconut water, and spinach, the latter of which thankfully doesn't interrupt the fruitiness. 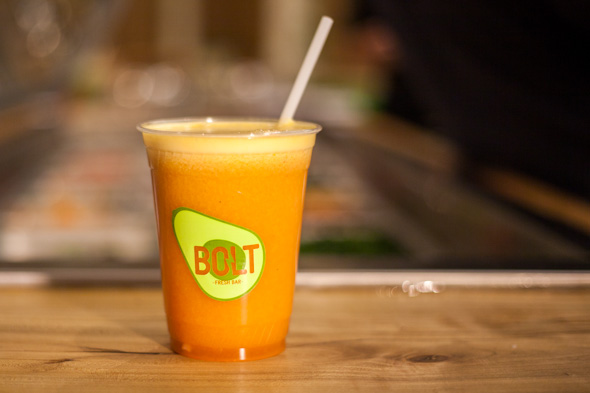 A tad less detox, the Lemon Tart ($9) tastes somehow more like lemon meringue than plenty of lemon meringue I've had. Using the juice, zest and flesh of a lemon, coconut milk, banana, medjool dates, lucuma, with a dash of Himalayan sea salt, the batch is blended to a pillowy, custard-like consistency and almost has a lingering tinge of caramel. In a way, it's the most "desserty" of the roster. I'm not sure I could finish an entire serving, so naturally tart and sweet it is, but certainly it's something special and worth trying. 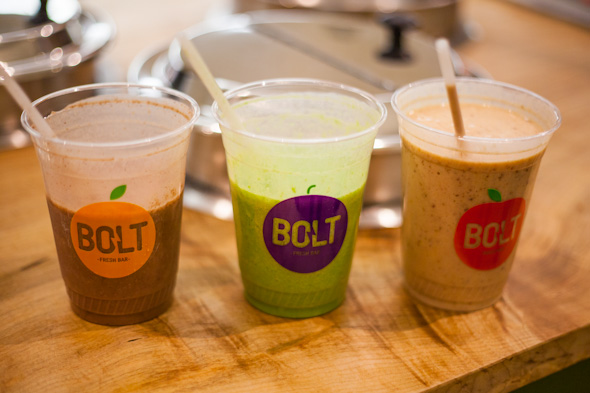 My favourite and clutch go-to smoothie at Bolt will be forevermore their Greena Colada ($7). Now, it may not be as new wave exotic as some of the options, featuring pineapple, shredded coconut, kale, agave nectar, and flax seed, smoothed together with coconut milk and raw cashew. Yet, for my palette, it's the most measured of the lot, striking a tricky balance between tasting healthy and tasting like a treat. Not sure if I'll ever tire of this one to be honest. Bet "Greena Colada" would make a killer jingle, too.

Smoothies aren't the only drinks on tap at Bolt. Their pressed juices are also superb, straightforward yet revitalizing. The Refresher ($7) is a light and bubbly number with cucumber, romaine, celery, and then ginger and green apple to give you more alkaline mileage. 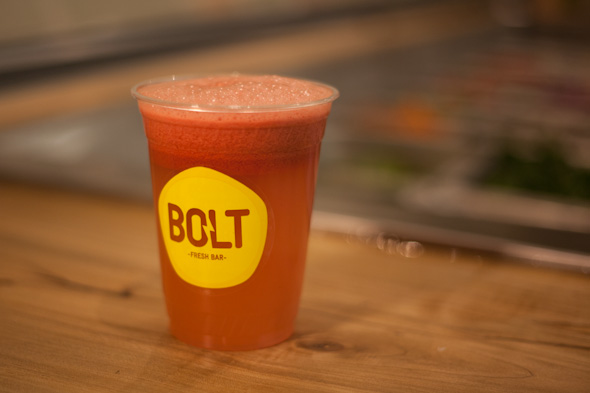 Their Beet juice ($6) is a no-brainer too, a pleasant concoction of bosc pear, apple, meyer lemon and ginger. Also worth trying is the Spicy Citrus ($6) with its lively sweet and acidic mix of orange and grapefruit, lemon and lime, lit up for the heck of it with some cayenne. 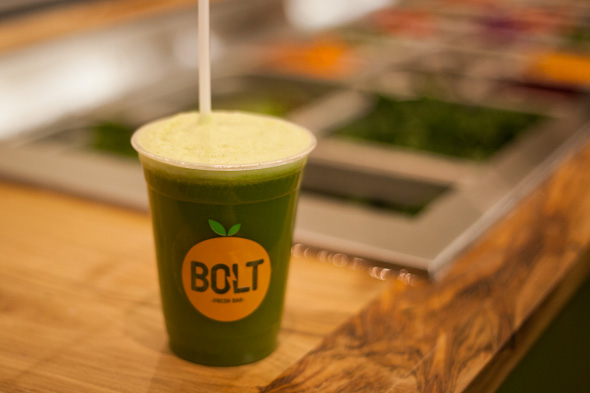 The Watermelonade ($6) is a special treat for me, with its trio of watermelon, lime and mint. Simple, I know. Resembling one of my favourite salads, I'd say it makes the translation into beverage form just fine.

At the moment, the beverage department is where Bolt excels particularly. Mindful of this fact, plans to bottle are in the works. Yet, I expect that as operations steady out and their reputation grows, their savvy meal options will be just as coveted. 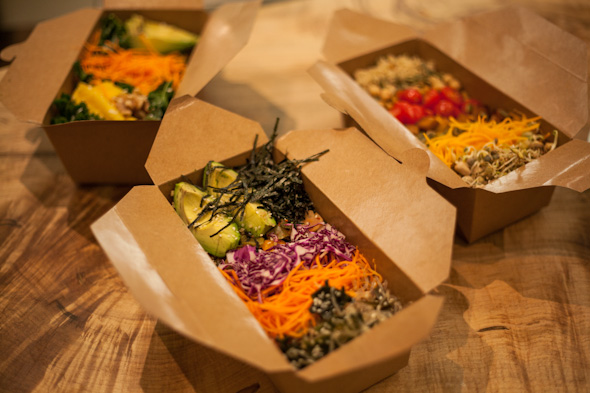 Their grain bowls and salads are simply too affordable and tasty to not earn some fanfare. Perfect for post-workout, the Protein Bowl ($9) is crammed with brown rice, supple tofu, bean mixture, cherry tomato, butternut squash, pepita and crunchy sprouts, with a sidecar of carrot miso dressing. Paired with a smoothie, that bowl might turn into two meals. 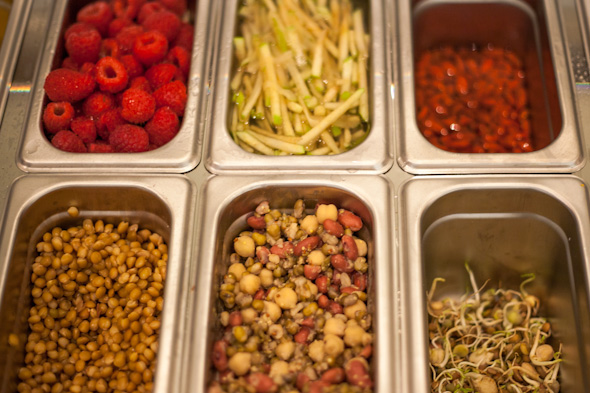 A standout to me is the squeaky crunch and umami flavours of the Vitamin Sea bowl ($9), which had kelp noodles, seaweed, shredded carrot and red cabbage, kimchi, and avocado on a bed of quinoa and drizzled with creamy lemon tahini dressing. You can also choose to customize your bowl with up to five toppings ($9) to switch things up.

There's also the Massaged Kale salad ($10) with shredded carrot, mango, and avocado oil is chock full of nutrients. This option goes down nicely with their local kombuchas and kefir waters, which stand at the ready in their stately, over-a-century-old cooler. 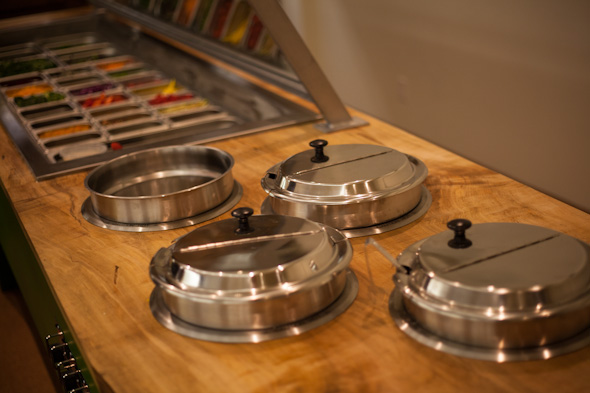 Their soup ($5) and stew ($7) menu is not quite in full swing, but from samples I've tasted, the in-house, cold pressed mirepoix gives a deep aromatic and flavour base to the bean medley stew I try. As a bonus, both the soups and stews are served on a bed of rice by default, so it's a heartier meal than you might expect. 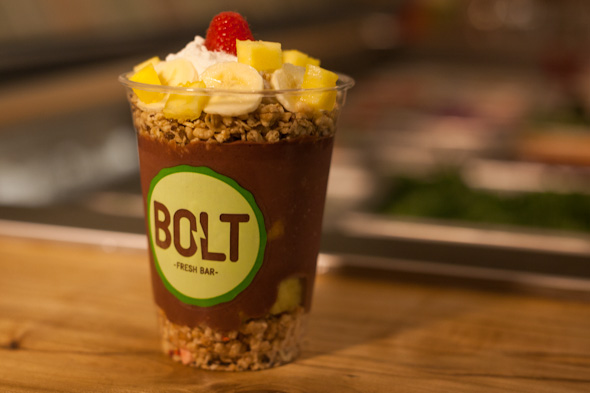 Last but not least, I try the Acai Bowl, which is a fine alternative to yogurt or even an ice cream sundae. I have the powered up version ($5/$8), a total fuss of banana, red berries, lucuma, pineapple, mango, whipped, shredded, and milked coconut, and agave. Two bands of granola break up the flavours and textures with a heartier granola at the base to withstand sogginess.

Bolt may have just opened, but I wouldn't be surprised if it's not just locals who wind up making Bolt a regular part of their weekly regimen. 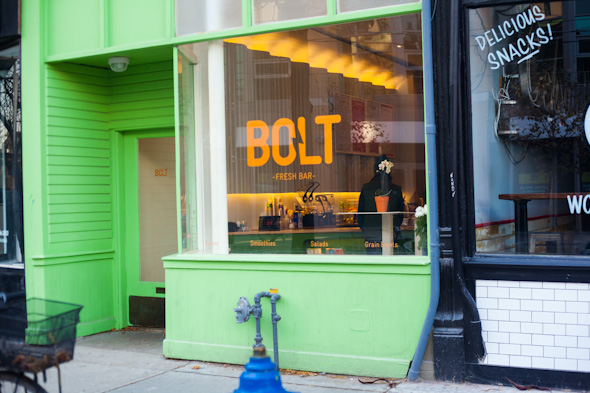 The Best Salad in Toronto