You might chalk it up to rampant apophenia but there seems to be a curious correspondence between North/South civil conflicts and fried chicken. Not to bang the war drum but anyone from Harlan Sanders to Martha Stewart'll confess that the best fried chicken comes from the "grey" side of the Mason-Dixon (heck, they don't call it southern fried chicken for nothing). Likewise, spending anytime in the two Koreas, you'll realize that though the north has the best tyrant to toupee ratio, you'll find some of the finest, most fingerlickin' fowl down south of the DMZ.

And from the Times to your fave foodie message board , peeps seem to be chirpping-up the crispy golden virtues of Korean fried chicken so blogTO, sage and shameless enough to recognize the smell of a fryer-fat-hot food trend, are proud to squeeze our soon-to-be 72 inch behind into one of the bandwagon's few remaining seats.

A downtown foray into the Korean fried chicken scene means only one thing (no joke, there don't seem to be any other places downtown that specialize in this tasty treat): a stop at Ajuker Chicken . Taking its name from a Korean chicken chain and of ambiguous relation to the AFC at Steeles and Yonge, you'd be forgiven for passing by Ajuker's frosted glass window and colourful LED Hangul spewing sign on your way to Christie Pits and the heart of Korea town since there's nothing particularly remarkable about this non-descript storefront--more so if you actually venture inside.

On first blush this place is seriously sketch. But don't be turned off by the minimalist low-rent decor, the cuckoo's nest paint job, the booths plastered with peeling wallpaper in a barnyard cock-and-hen motif and the Korean karaoke championships flickering placidly away from one of several LCD monitors located throughout the establishment (boybands are much more interesting in a foreign tongue anyways), your misgivings will morph epiphanically when you realize just how good Ajuker's Chicken is. 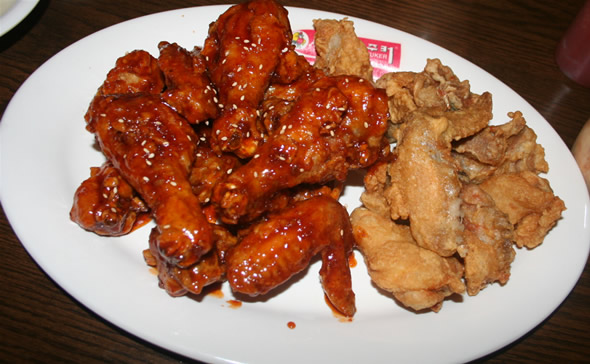 Ajuker's menu is littered with much of what you'd expect in the neighbourhood and can probably found better made elsewhere but who cares, you're here for what Ajuker does best (heck, it's in their name--coming here for Korean food would be like going to Red Lobster and ordering steak). And What Ajuker does well, it does exceedingly so--succulent tender pieces of lightly battered five-spice scented chicken cooked to order arrive mouth-scorchingly hot from the fryer (each batch of chicken made to order here unlike their heat-lamped cousins at the other "kfc" on the block) either plain or covered in a spicy, garlicky soy barbecue sauce and dusted with sesame seeds. Too much trouble deciding whether to have the plain or sauced varieties? Worry not, Jackson, you can have your chicken and eat it too with a large half and half ($17.55). The half and half straddles a fine balance: the sauced pieces balanced by the plain pieces means you'll have plenty to keep your tastebuds occupied without ever getting bored. Beware though, Koreans enjoy their chicken they way the Chinese enjoy their duck: with a little bone and a little meat, so the chicken is cut into some interesting configurations that'll no doubt induce the odd feline reference. 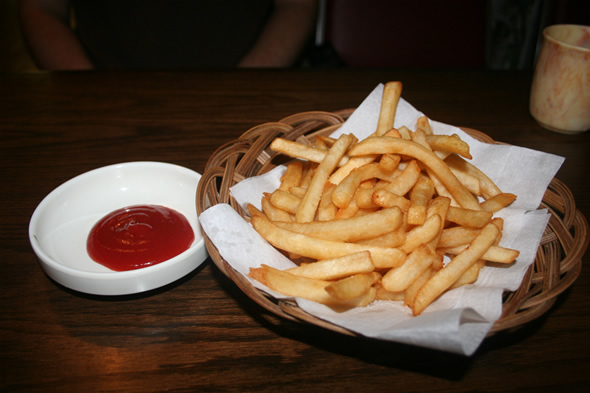 Yeah, the French fries here are pale and mediocre but let's face it, they're an afterthought anyways since you'll order them shamefully-- the way you buy magazines with your condoms at the drug store-- in a vain attempt to disguise the obscenity of devouring a whole chicken a la carte. And for some bizarre reason each chicken order is accompanied by a bowl of pickled daikon to ostensibly cleanse your palate between gluttonous bites. That aside, there's precious little to complain about while you gleefully tuck into the kind of chicken that could steal fire from the gods, and find its way out of a Minoan maze--unless you run outta napkins of which you'll use a tree's worth during the course of your snacking. Sweeter, crunchier and tastier than an album's worth of My Bloody Valentine tracks, this chicken is the stuff of artery clogging myth and something you'll be craving fortnightly from your first taste. 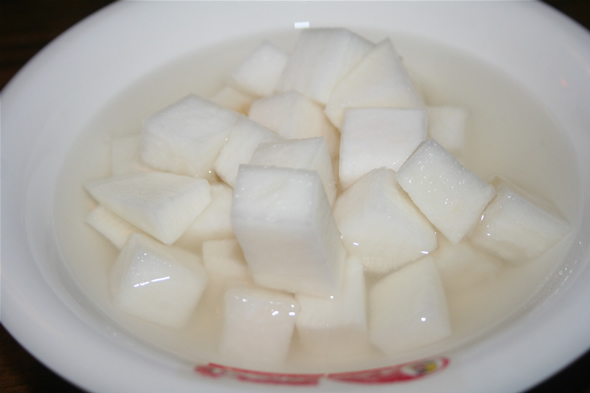 South Koreans of all stripes, as well as the odd itinerant English teacher, have been feasting on these wonderful bites of crispy, swoon-inducing poultry heaven for going on 20 years and usually consume their fried chicken as an accompaniment to several beer or shoju--a highly civilized method of consumption it must be said. Seldom has a civil conflict produced such delicious results. 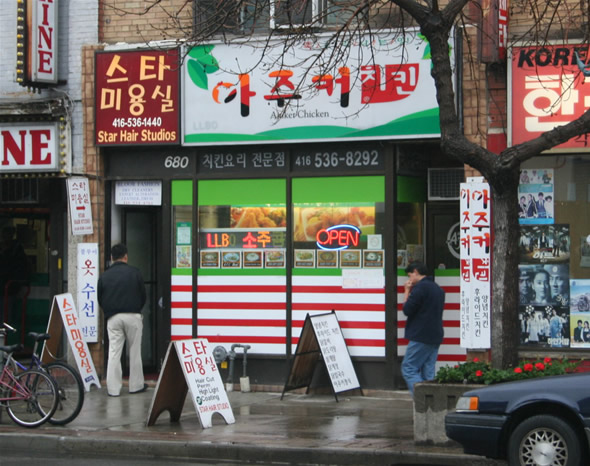