Several mid-rise apartment buildings constructed in the 1930s and '40s line the short walk along Eglinton Avenue West between Bathurst Street and Vesta Drive, including some absolute stunners that deserve your appreciation. 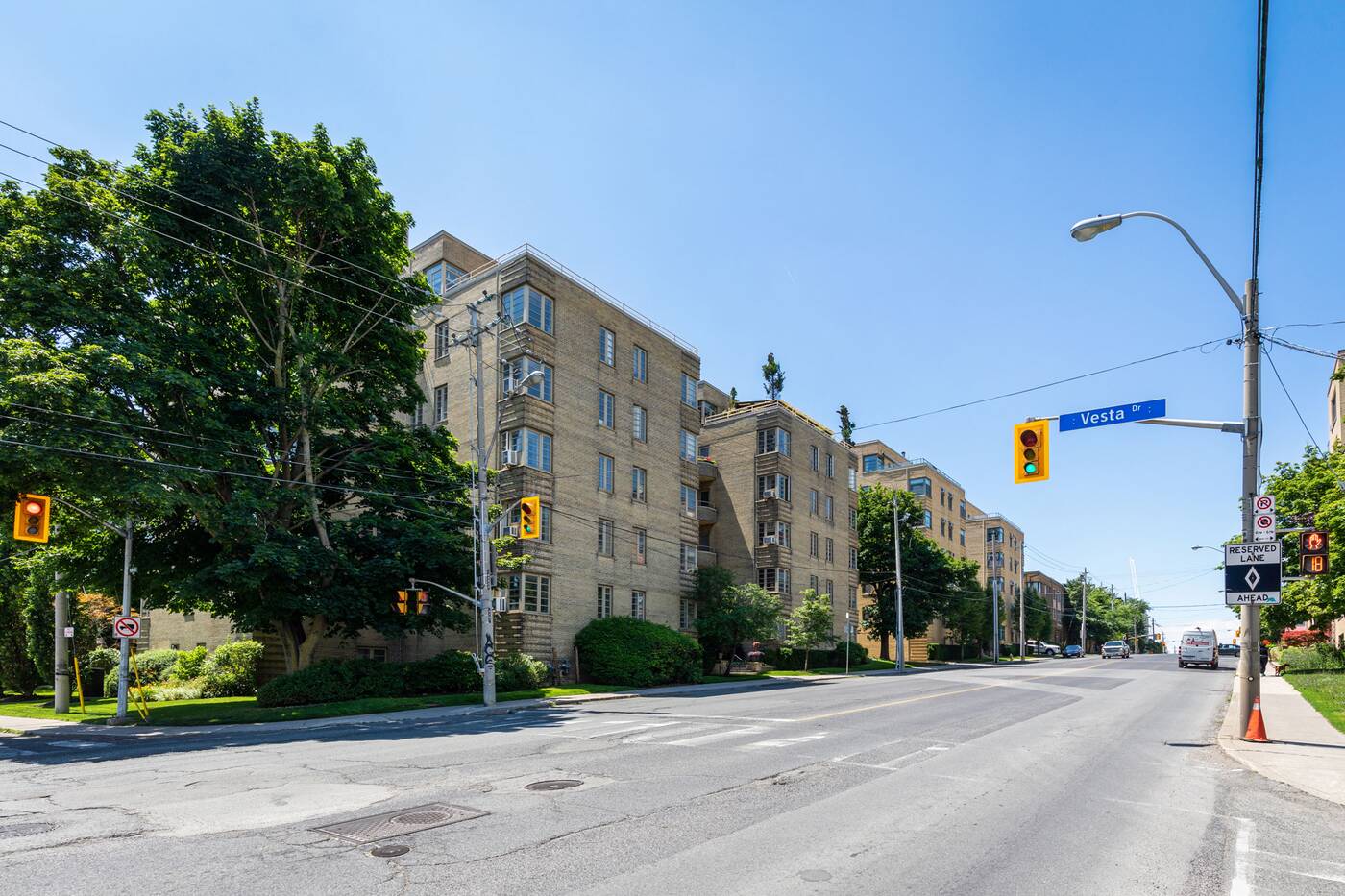 It's only about 300 metres from end to end, but join me on this short stroll through the architectural history of these fascinating blocks. 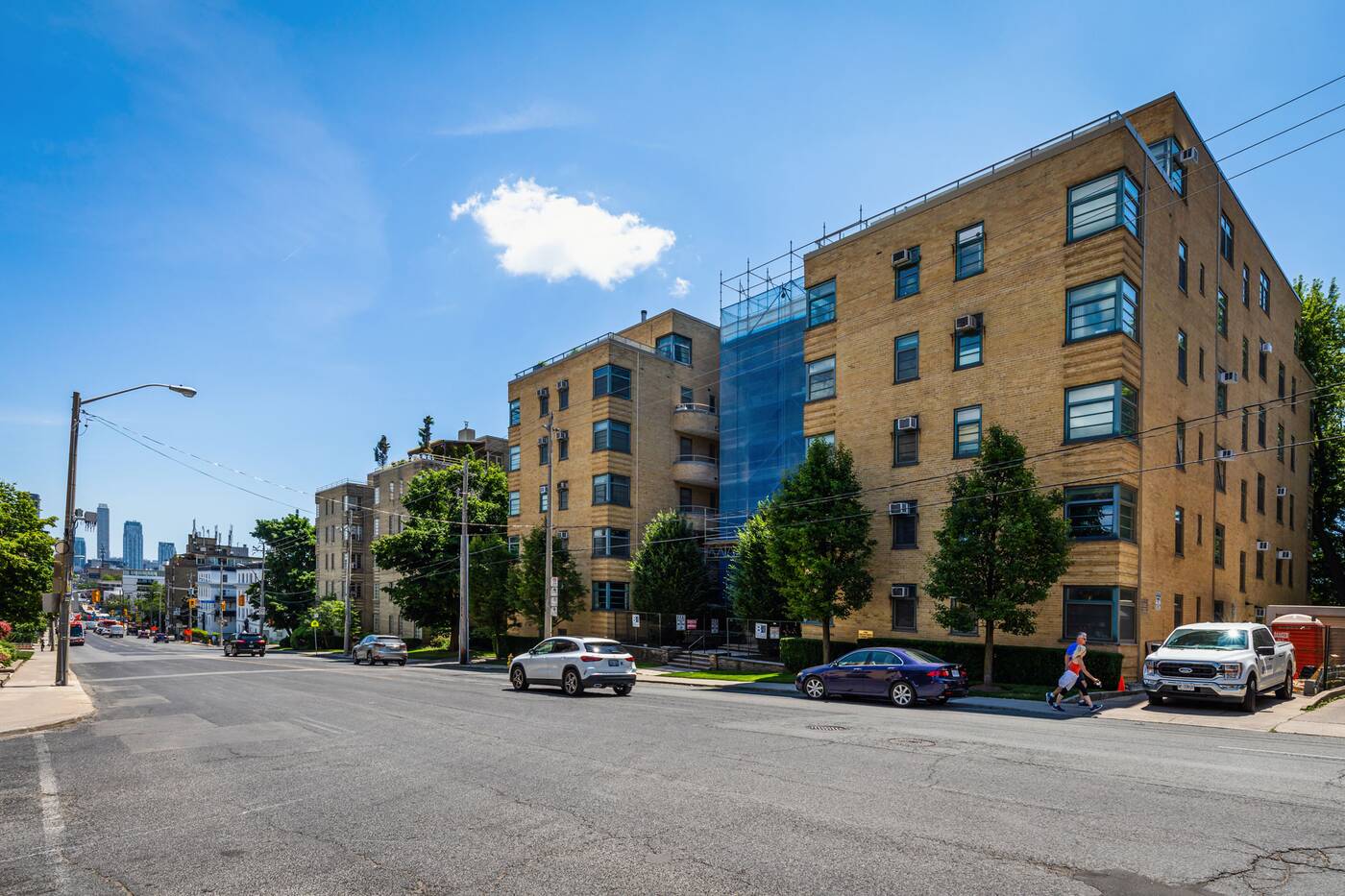 I start the photo tour at Vesta and Eglinton and move west. Just west of the corner, it doesn't take long to come across a pair of gorgeous Art Deco gems on the south side of the street known as The Roycroft and The Croydon. 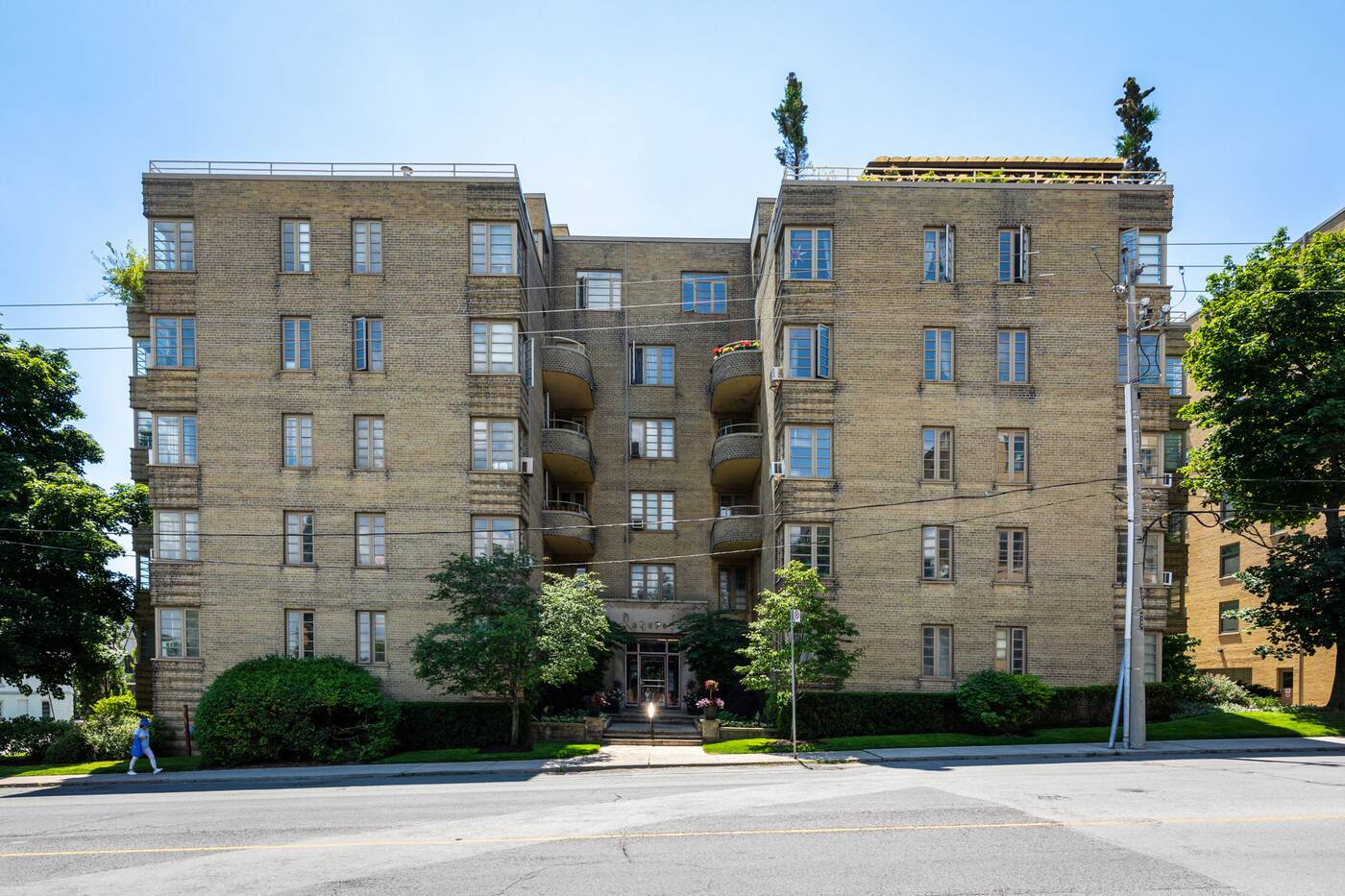 At 707 Eglinton Ave W, The Roycroft is a five-storey rental apartment-turned co-op building known for its simple, yet elegant style from the late Art Deco period in the mid-1930s. 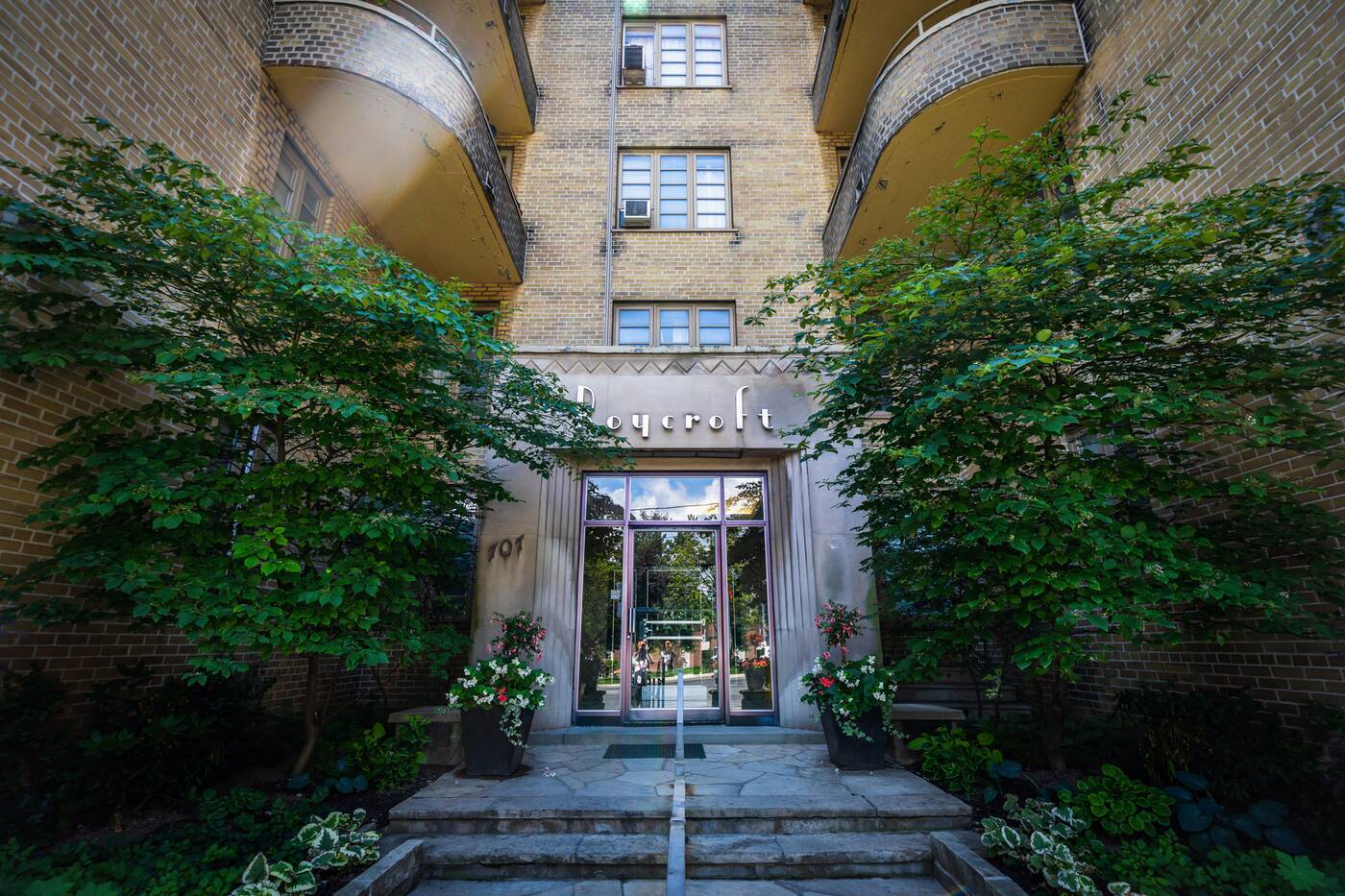 Its sibling building, The Crofton at 717 Eglinton Ave W, features an almost identical style, differentiated by dark window frames and a lighter, cleaner brick finish — though they appear to have been built to identical design aside from the ornamentation of their entrances. 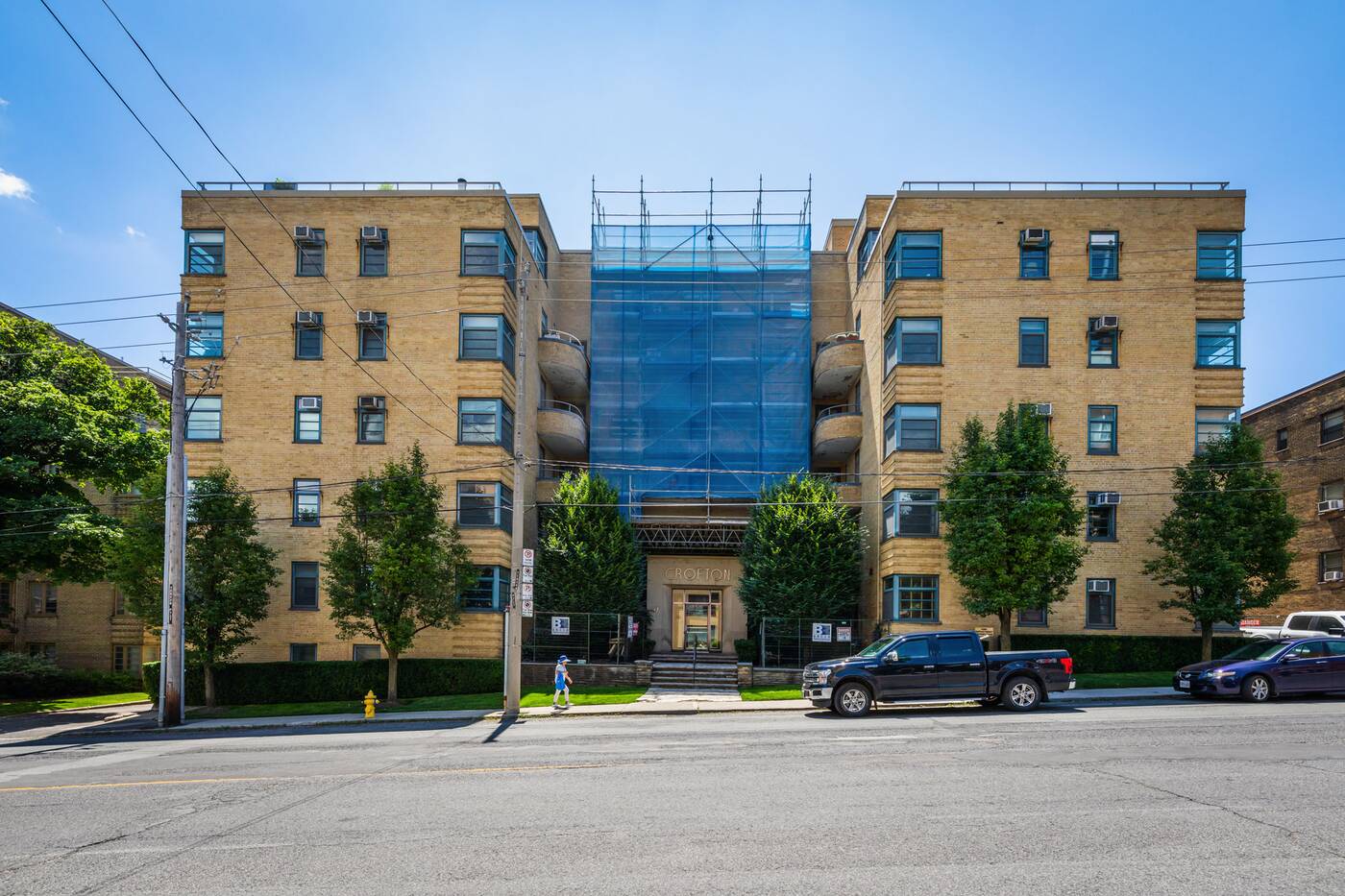 Unfortunately, The Crofton was undergoing some exterior work at the time of our visit, obscuring the central section of its symmetrical exterior. 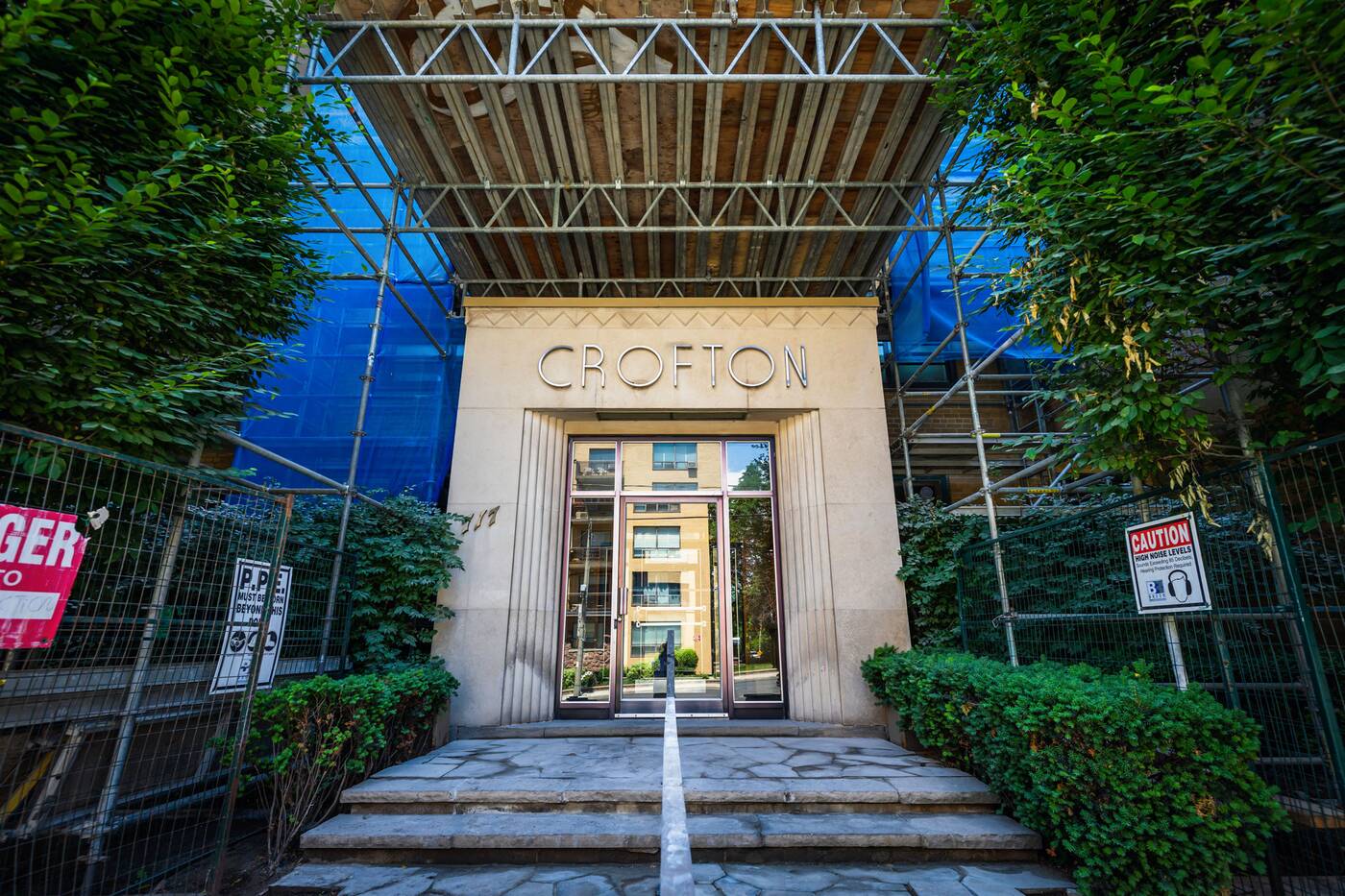 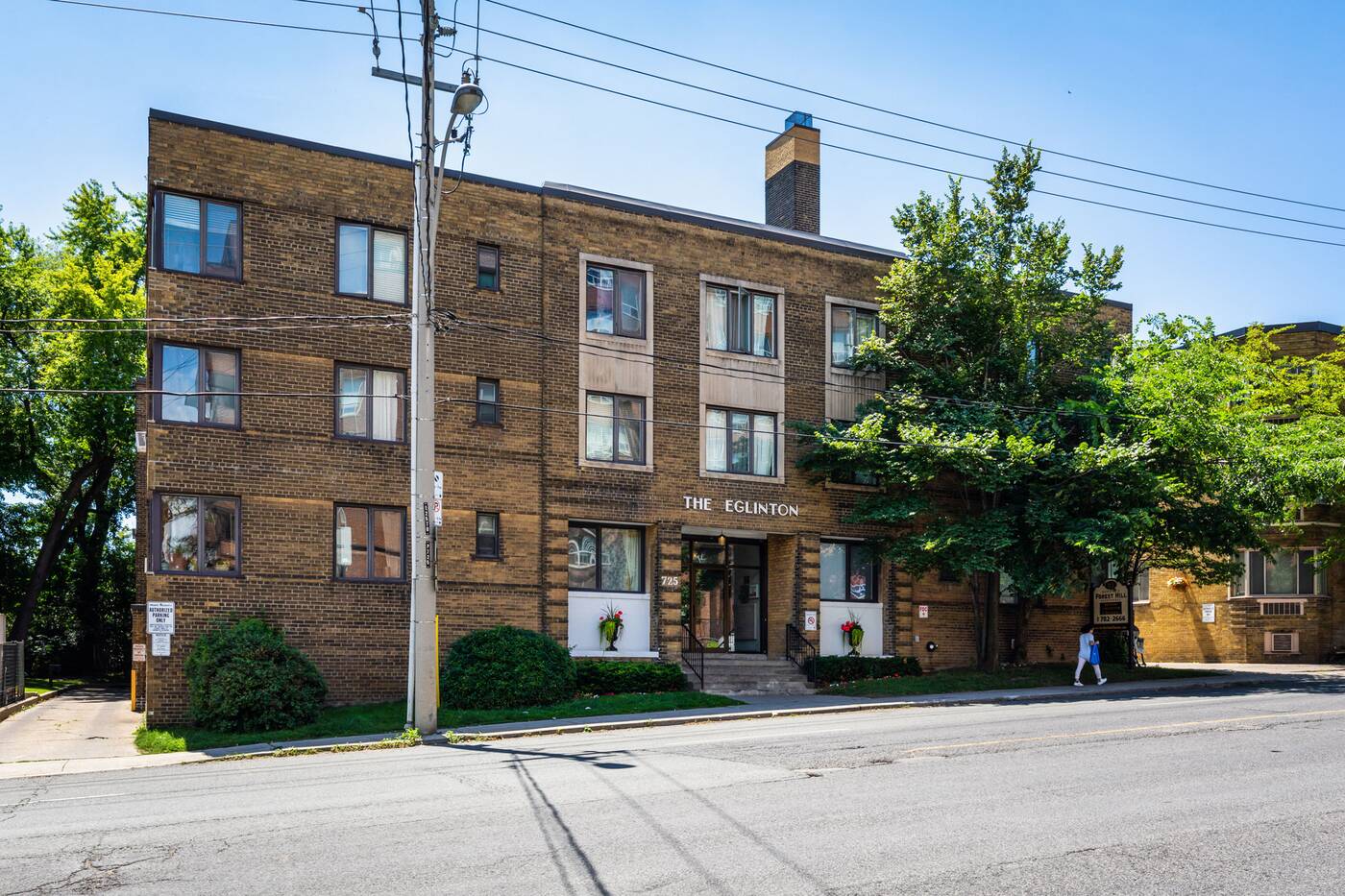 It's a tough act to follow after its eastern neighbours, but the three-storey building's entrance lettering, brickwork and carved limestone touches all help add to this area's architectural appeal. 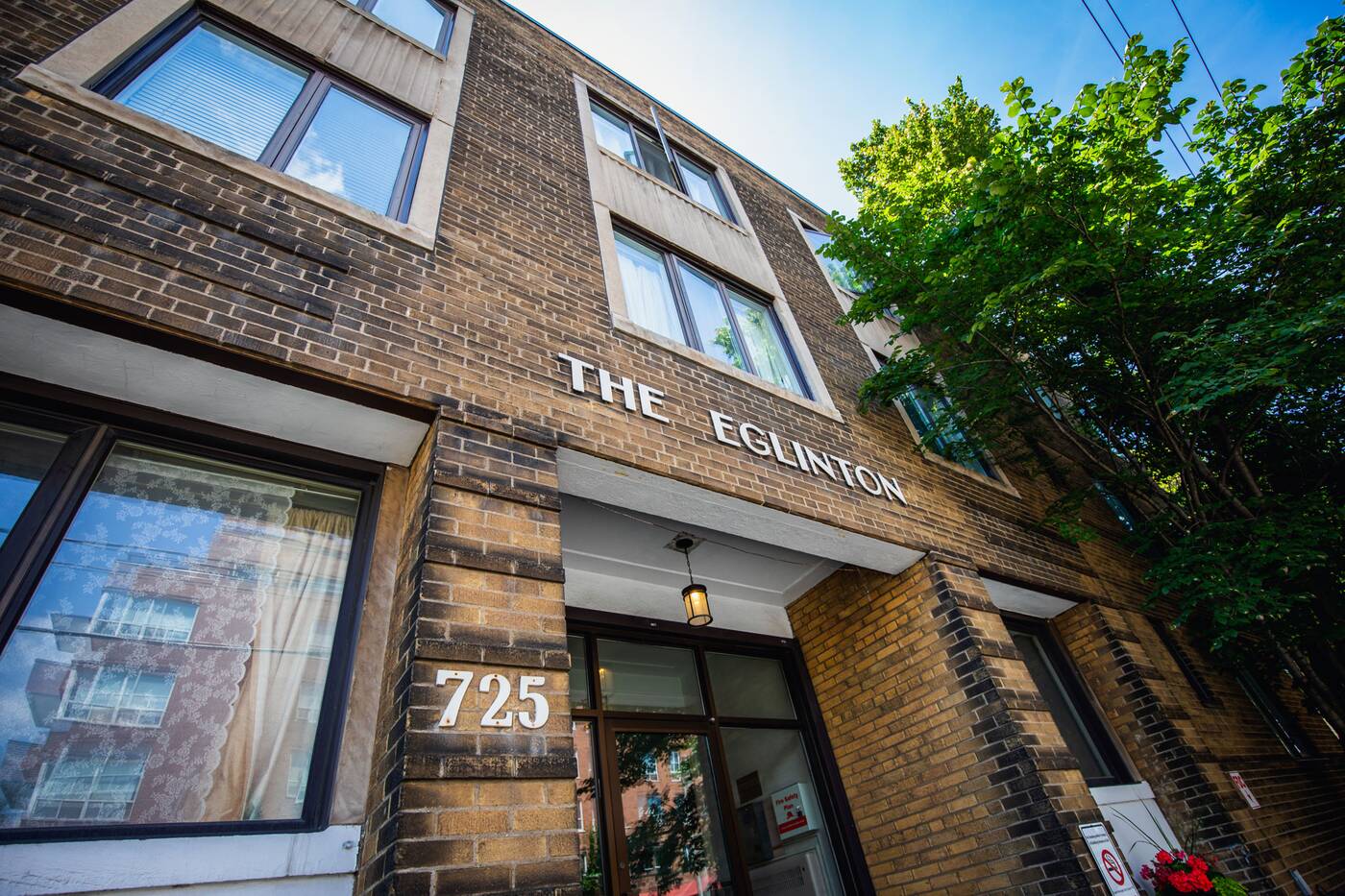 Moving west, the three-storey apartment building at 117 Old Forest Hill Road turns its back to Eglinton West, and requires a quick detour around the corner to the south to see its most impressive Art Deco features. 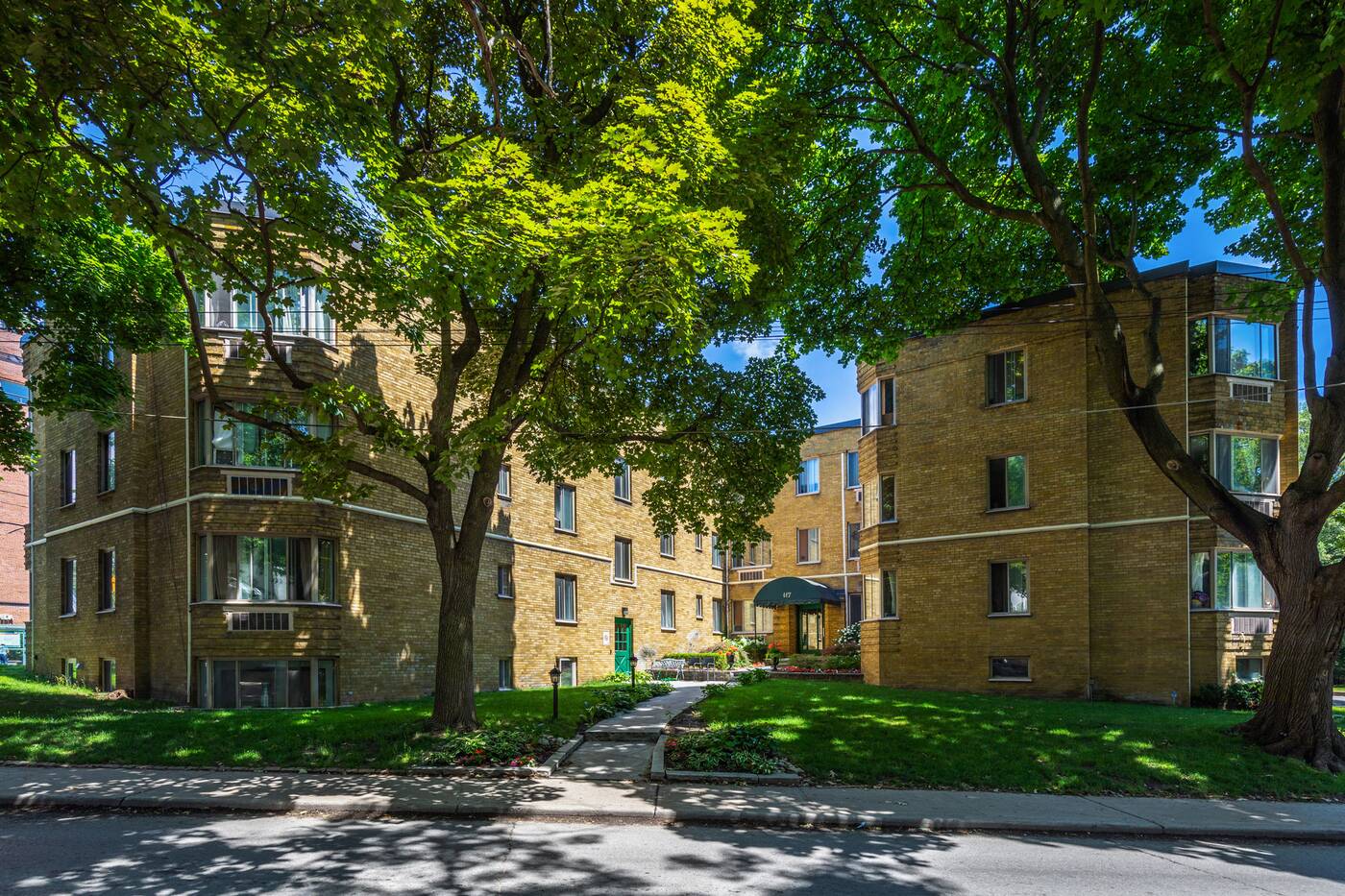 The northwest corner of the Eglinton and Old Forest Hill intersection is home to perhaps the most striking example in this little cluster of Art Deco buildings, known by the appropriately regal title of Forest Hill Manor.

This four-storey building at 790 Eglinton West was built in 1940 at the tail end of the Art Deco period. Its design by Forsey Page & Steele and John B. Parkin has clearly stood the test of time, and somewhat surprisingly, is the only heritage-listed building mentioned in this article. 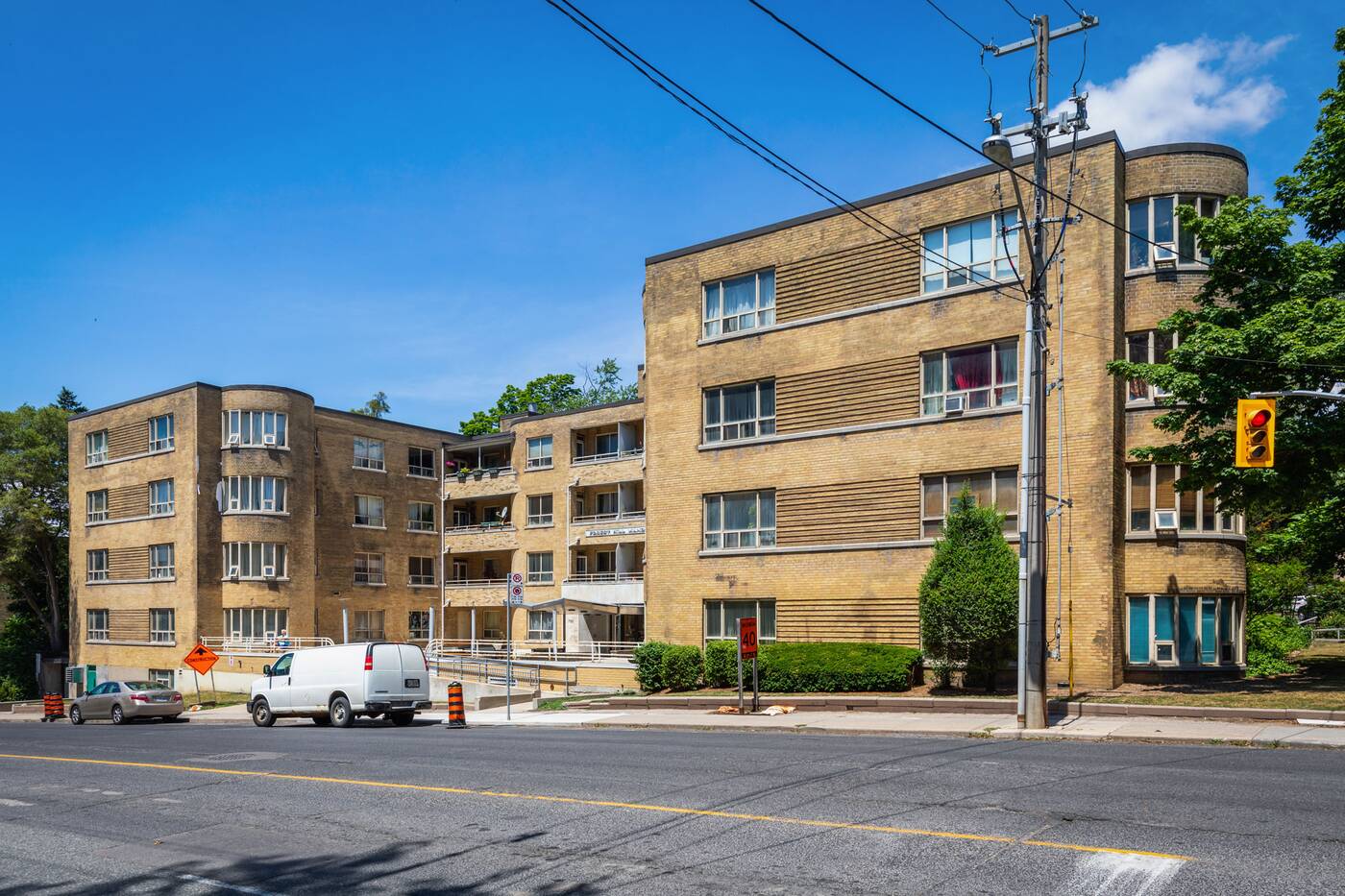 Though the City gave it this status in 1986, it has not been designated under the Ontario Heritage Act and is, thus, not fully protected from possible future redevelopment schemes. 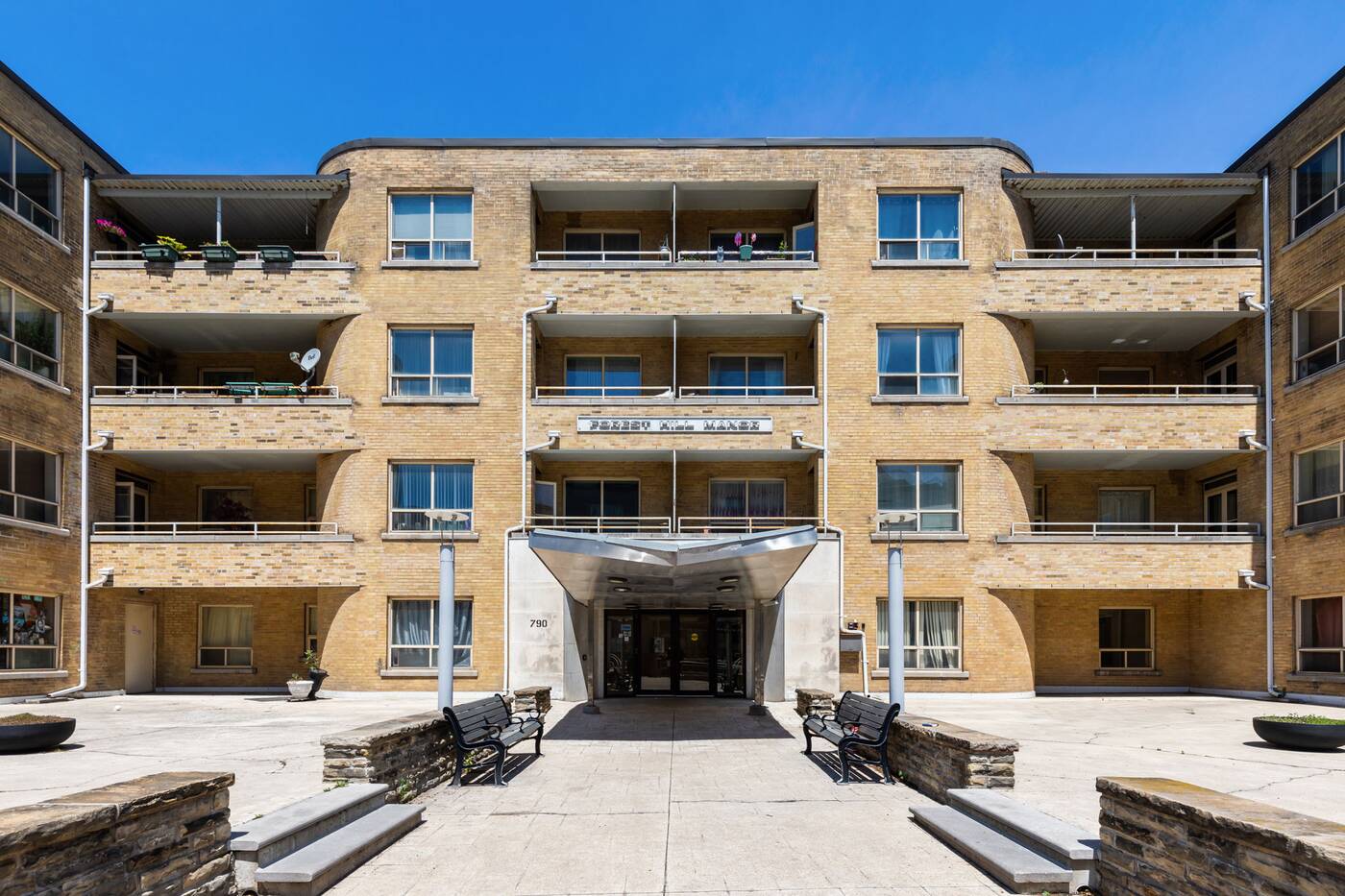 The brief but memorable era of Art Deco gave way to the rise of International Style and mid-century Modernism with the end of the 1940s. Mid-rise apartment development would continue along this stretch into the 50s and 60s, but in the new styles of the era.

Complexes like the 1951-built Savoy Plaza at the southwest corner of Eglinton and Old Forest Hill added some Modernist architectural variety to the stretch while maintaining the style and materiality of its predecessors.

Savoy Plaza was, unfortunately, given a new paint job in the mid-2010s, covering its buff brick exterior in tones of grey. 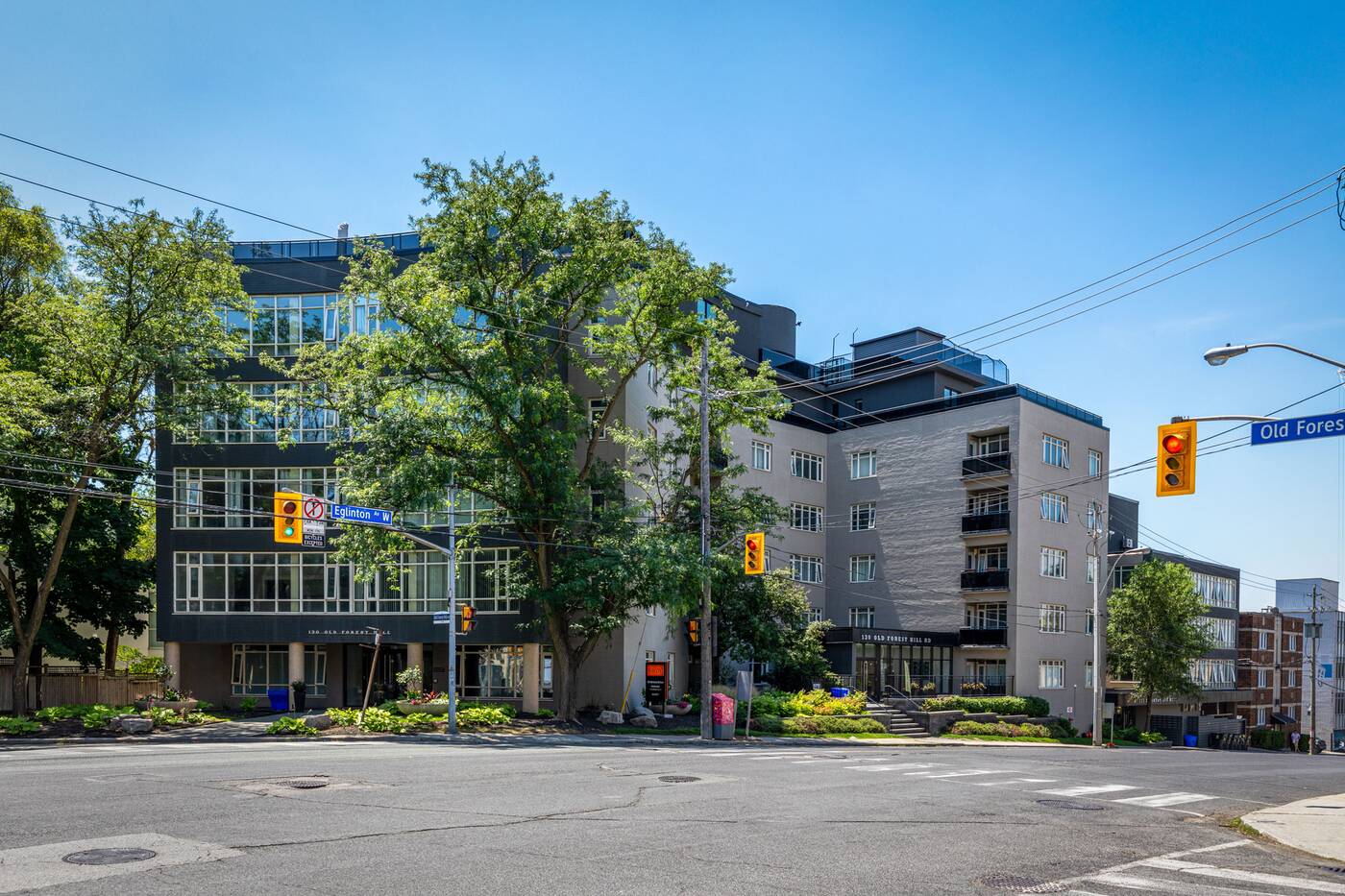 A couple of kilometres to the south, another sparser Art Deco district exists in the Midtown area, this one found on St. Clair Avenue in the blocks flanking Yonge Street.

Some examples in the area include The Fleetwood at 64 St Clair Ave. W., the Park Lane Apartments at 110 St. Clair W., and the Toronto Public Library - Deer Park Branch at 40 St. Clair E. 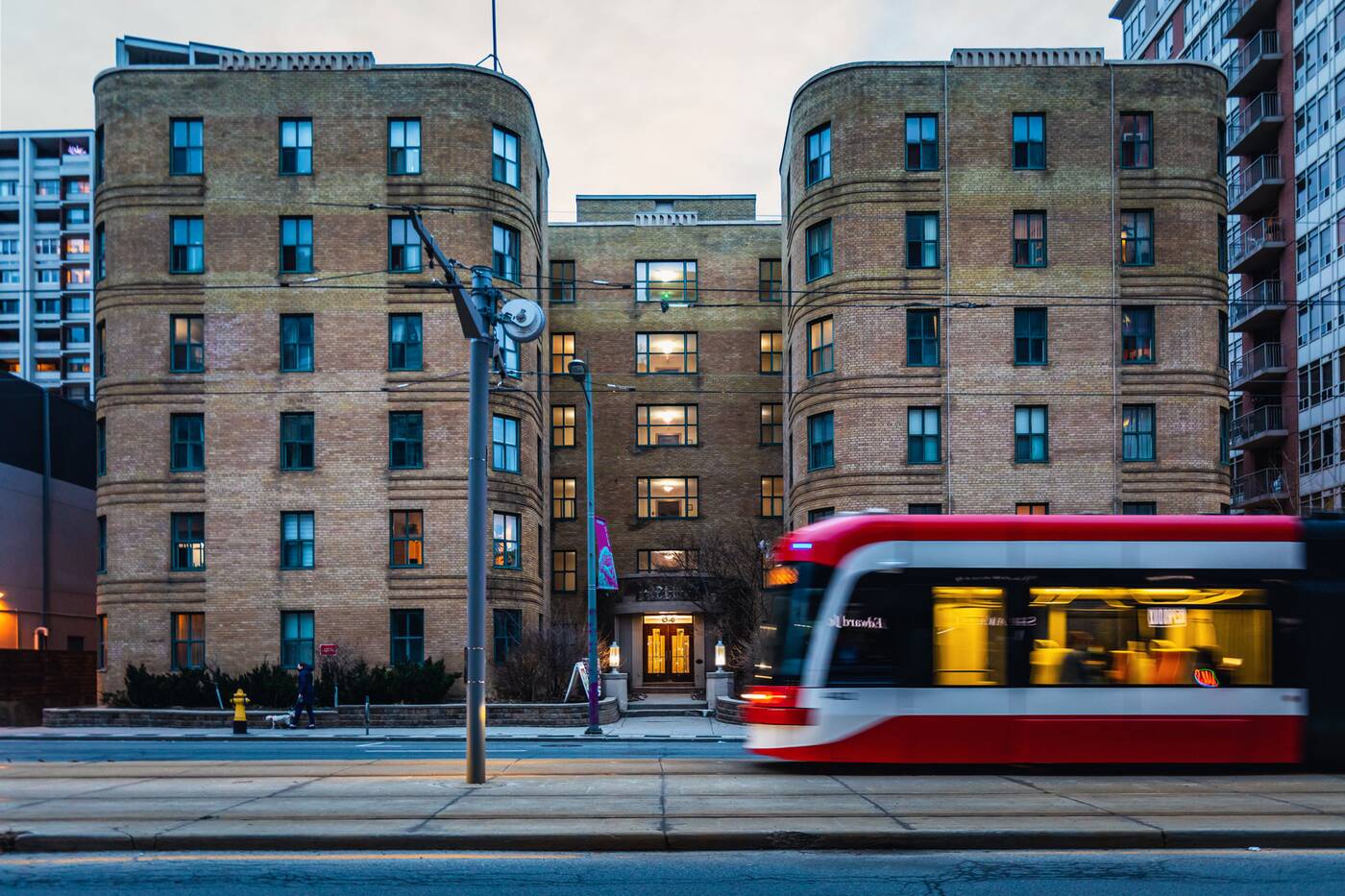 Art Deco may not have left the same world-renowned landmarks in Toronto as it did in cities like Paris and Los Angeles, but there are some real diamonds in the rough for those willing to explore the urban fabric.