The news that a popular Value Village would be the latest Toronto building to become a condo upset some residents, and now people are fighting to stop the development.

A petition was started two weeks ago to oppose any more high-density housing in the quickly developing area. 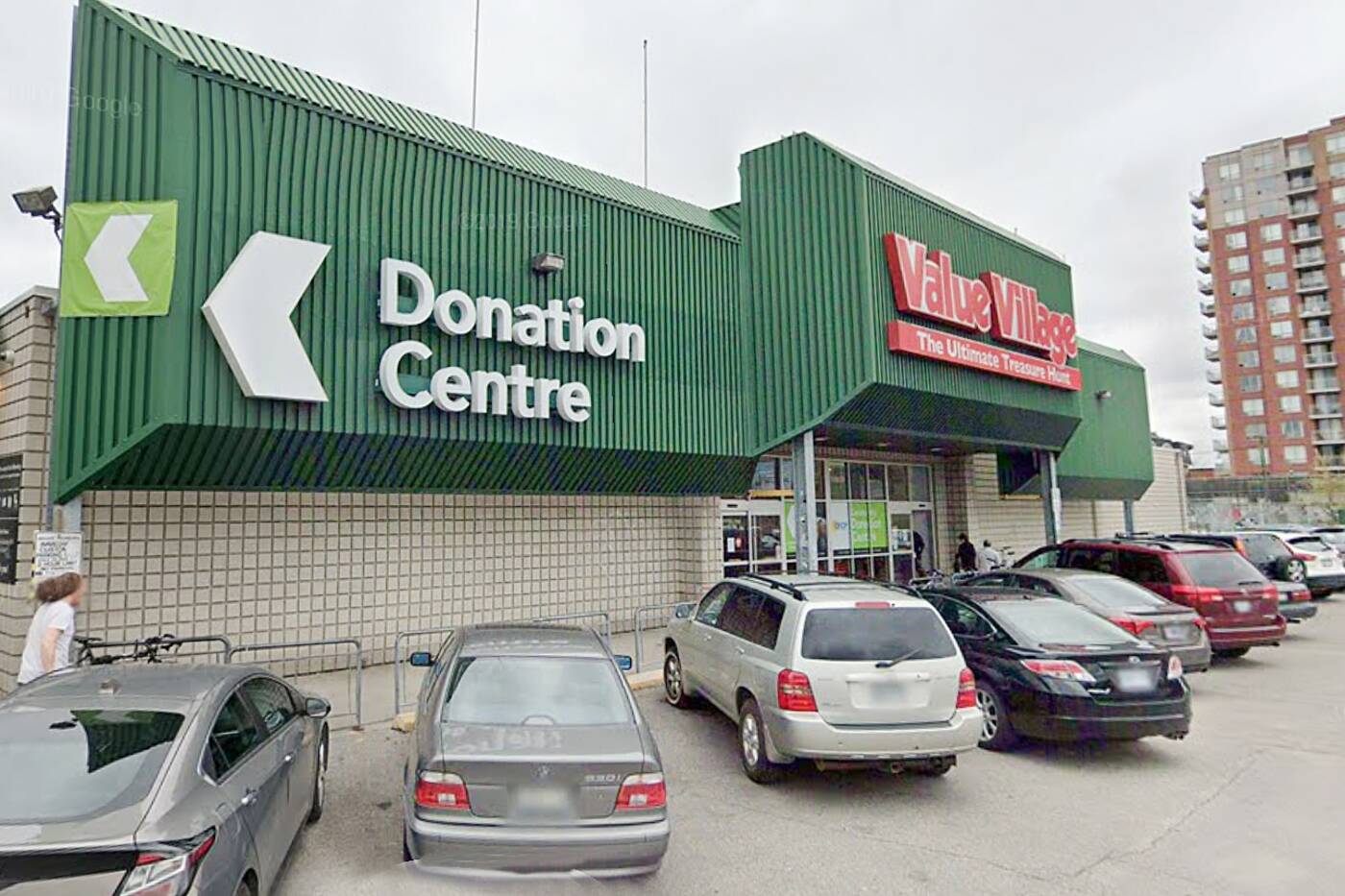 There is a proposal to tear down this Value Village at 1319 Bloor Street West and build two condo towers. Photo via Google Maps.

Some thought high-density housing is needed near transit, and the towers should be even higher.

"It should be 40-50 since it's close to a subway station and GO. This is where density should go," one person commented.

Others felt skyscrapers don't fit in the current neighbourhood, which is mainly single-family homes and low-rise buildings.

"A 30, 40 or 50 story building beside a 3 story home is extremely poor city planning! We need to think about the fabric this is being stitched into," another said. 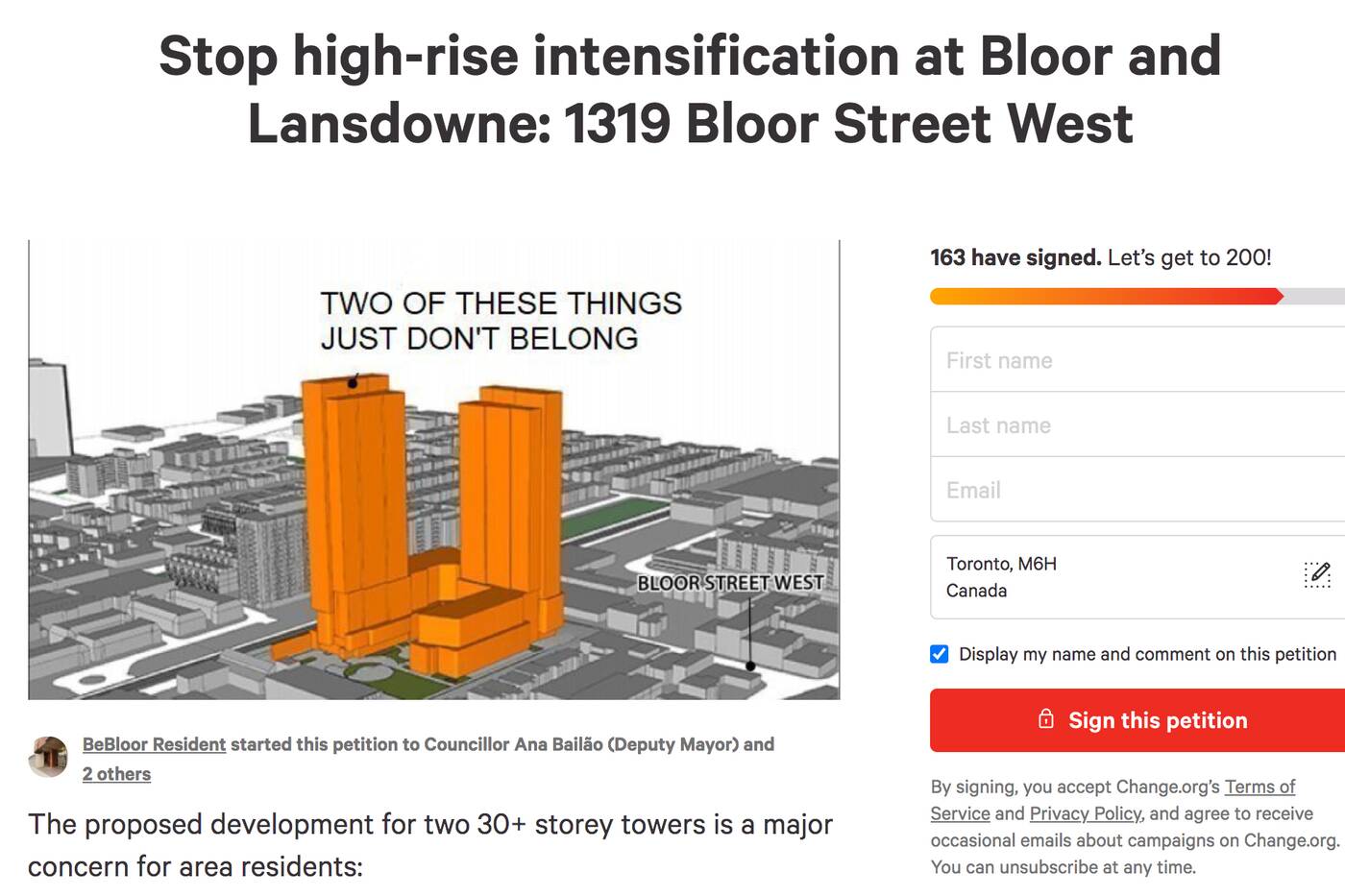 A petition has been launched on Change.org fighting the proposal for two towers.

Now a petition, Stop high-rise intensification at Bloor and Lansdowne: 1319 Bloor Street West, is fighting the proposal. As of Friday afternoon, nearly 200 people had signed.

The petition creator, BeBloor Resident, who identifies as a resident of the 14-storey BeBloor condo tower directly next door at 1369 Bloor St. W., says the proposal is a "major concern for area residents."

The towers don't fit with the surrounding neighbourhoods, and the intensification will increase traffic congestion that is already gridlocked, the petition says. 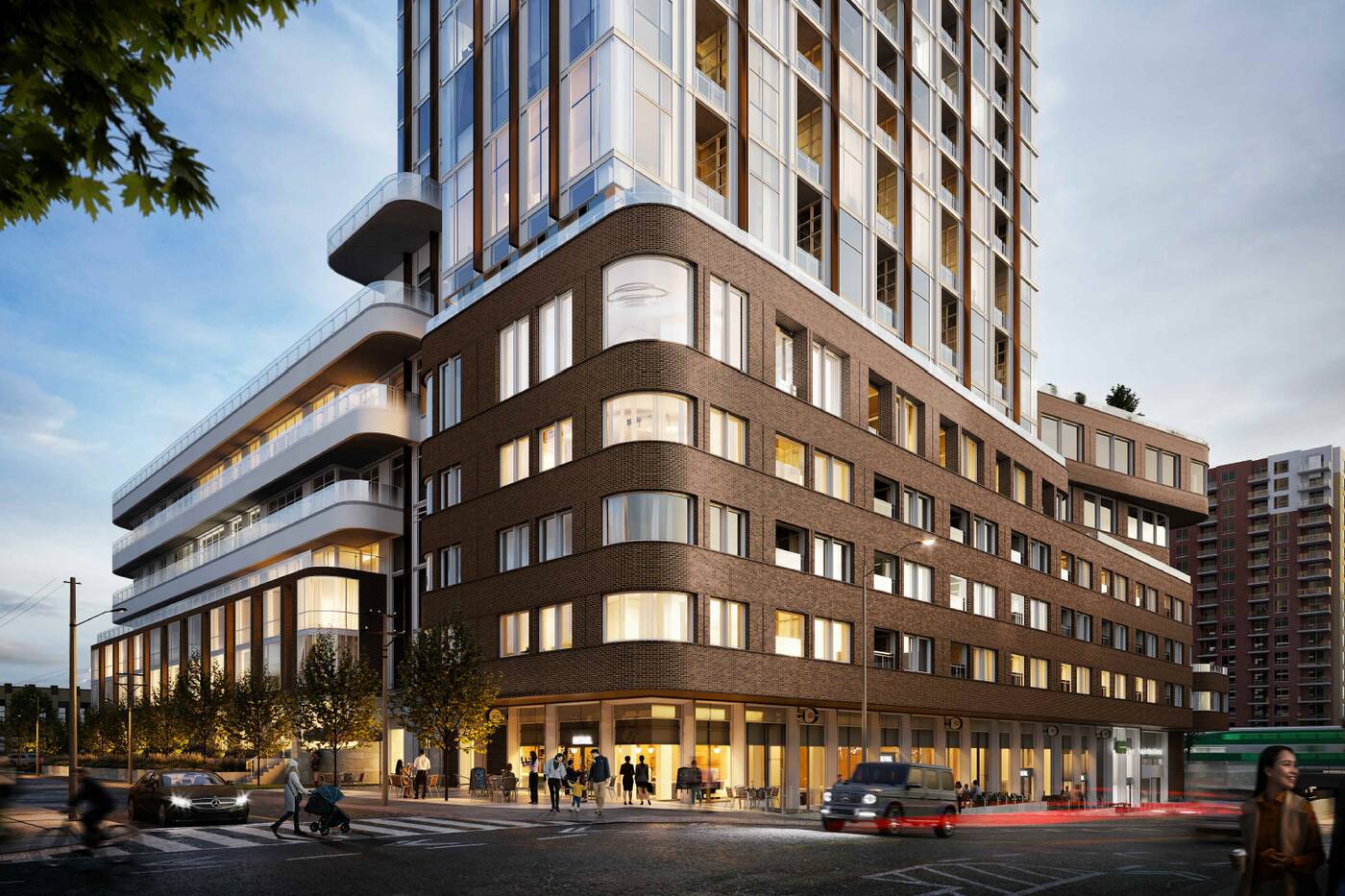 The towers don't fit in the neighbourhood the petition says. Rendering by Hariri Pontarini Architects via City of Toronto application submission.

High-towers belong in the city core, the petition argues.

"This new development trend in the city eliminates the feeling of a neighbourhood/residential community that is distinct from the core," the petition reads. "Packing people into high-density towers is not the only way to balance the need for growth and bottom lines." 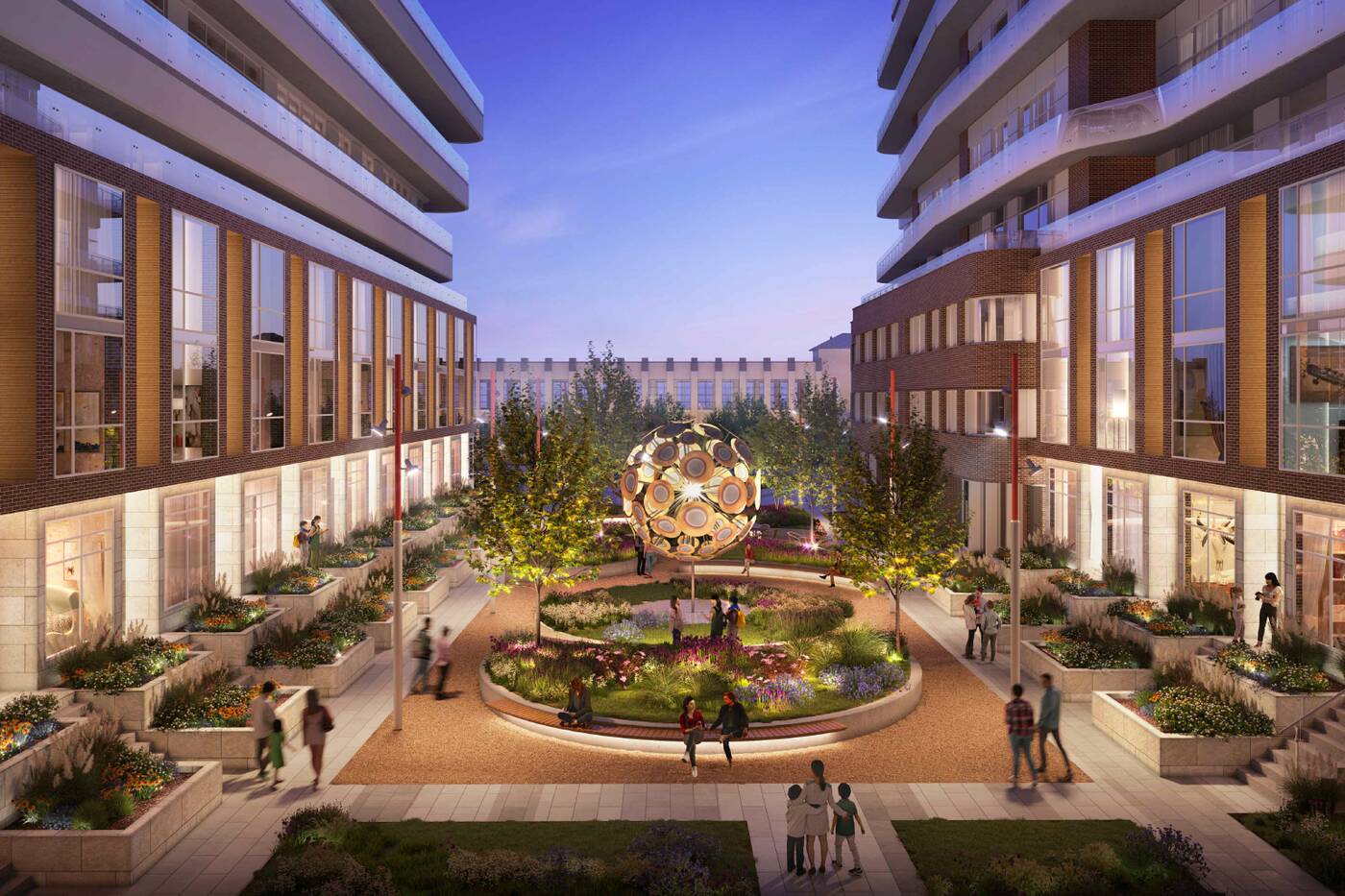 Plans for the development include a common outdoor space for the towers.  Rendering by Hariri Pontarini Architects via City of Toronto application submission.

Bousfields Inc. did not immediately respond for comment on the petition but the development plans submitted to the city note that there are other towers going up nearby with a plan to redevelop the Bloor Collegiate site at Bloor and Dufferin into residential towers from 19 to 37 storeys. 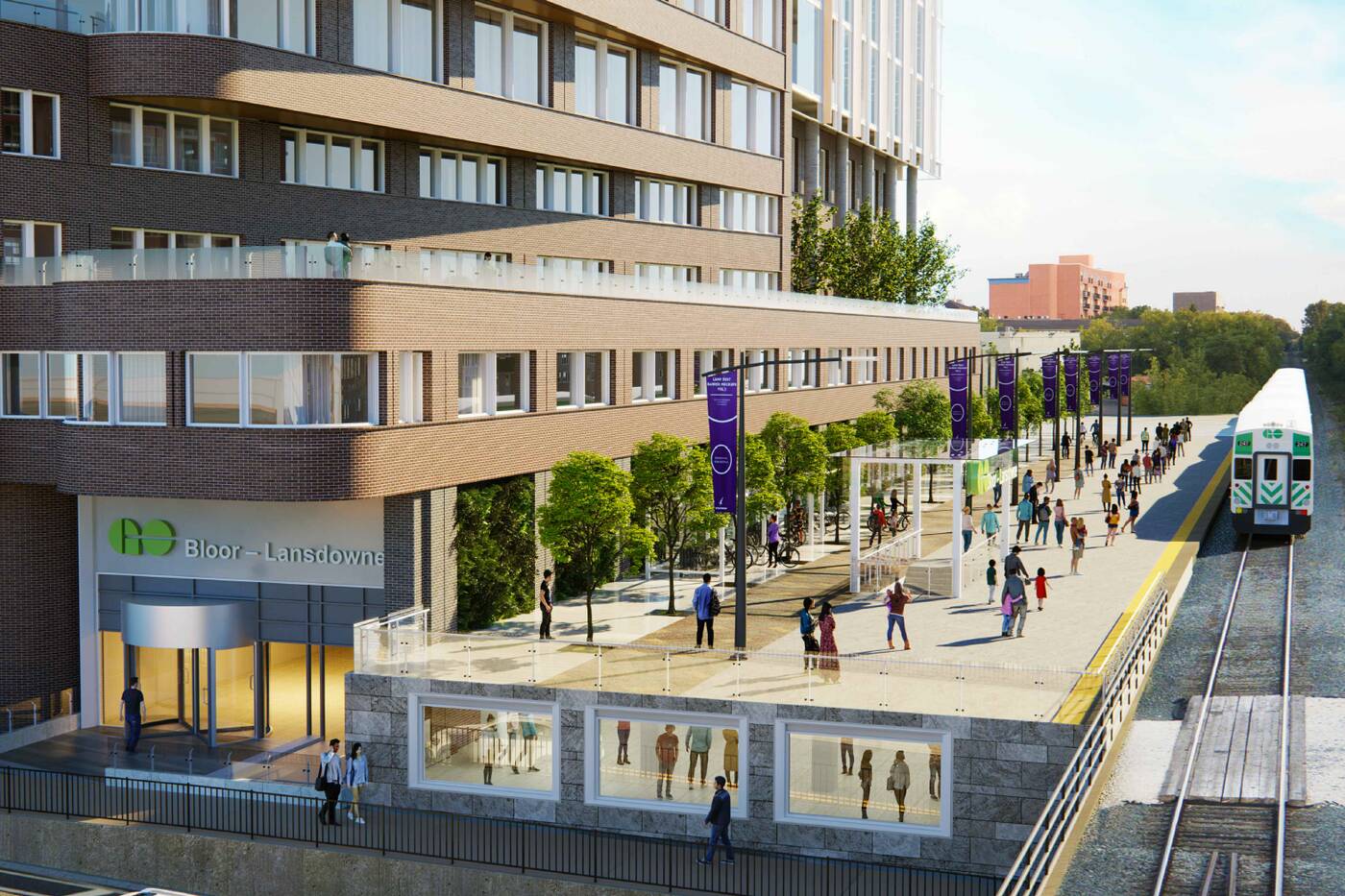 The developers are working with Metrolinx to incorporate a station entrance and platform for the new Bloor-Lansdowne GO Station.  Rendering by Hariri Pontarini Architects via City of Toronto application submission.

The site sits right by the Barrie line railway corridor and just south of the West Toronto Railpath and the developers are working with Metrolinx to incorporate a station entrance and platform for the new Bloor-Lansdowne GO Station.

So, as the two towers would be close to a GO station and TTC, the need for parking spaces is "minimal," according to planning documents.

A community meeting on the proposal was held April 14, and the decision on the development is still before council.