Weekend events in Toronto is our guide to events happening this Friday, Saturday and Sunday. Here's what's happening in Toronto this Jan 10-12, 2014.

No Pants Subway Ride & Dance Party
Since 2002 The No Pants Subway Ride, created by ImprovEverywhere, has been challenging the notions of proper transit attire. No pants? No problem - or such is the motto here. If you want to participate in this weekend's (potentially chilly) ride in Toronto, get to Downsview station at 4pm wearing your pants or skirts, them whip them things off in style. It's pretty straight forward. Need more? Hit up the No Pants Society Dance After Party at The Office Pub (117 John St.), which promises "killer drink specials, free food & DJ dancefloor crushers Haus Of Whaps" from 6pm til late. Keep track of your pants lest you lose them forever - unless that's your plan. Sunday, January 12, Downsview Station, 4pm.

Ethical Eater's Dilema
Do you obsess over everything you eat? Do you ever stumble around Lobelaws thinking "oh my god everything is awful what am I supposed to eat someone give me a sign?" You might have an ethical eater's dilema. Don't worry - okay, I know you're worrying, but here's an idea: Karma Food Co-op hosts the Ethical Eater's Dilema on Saturday at 1pm. The event is a meet and greet with Martin de Groot, founder of Mapleton's Organic Dairy who will speak to why he converted from conventional to organic farming. Saturday, January 11th, Karma Food Co-op (739 Palmerston Avenue), 1pm.

I Am Divine
I am Divine: the True Story of the Most Beautiful Woman in the World is a documentary released last year about the one and only Divine, aka Harris Glenn Milstead. John Waters, of course, appears in the film - drag icon Divine starred in Waters films such as Hairspray and Pink Flamingos. You can bask in Divine's glory this weekend on Friday at 4pm & 8:45pm, Saturday at 7pm, and Sunday at 1pm & 9:15pm. Then you have until January 16th to watch it again. Costumes are encouraged (how could they note be), so hit up the Salvation Army for sparkly dresses and massive pumps on the way over. January 10 - 16, Bloor Hot Docs Cinema (506 Bloor St. West).

LIFT Round-Up 2013
LIFT, or the Liaison of Independent Filmmakers of Toronto, here present a special screening of films made by LIFT members over the last year. "LIFT supports a diversity of filmmakers and filmmaking genres and the programme reflects this--from documentary to dramatic narrative to music video and experimental film. The films were made using LIFT's equipment, ranging from Super 8mm and 16mm to 35mm and High-Definition Video." Sunday January 12, 6pm, Bloor Hot Docs Cinema (506 Bloor St. West).

For more film events, check out our This Week in Film post. 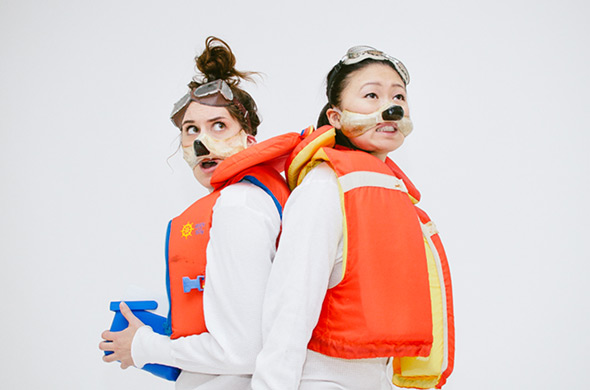 Next Stage Theatre Festival
The Toronto Fringe Festival took a small hit this past summer when clouds moved in and delivered more rain in one day than ever on record in the city. The weather wasn't able to dampen the spirit of the 25th annual indie festival though - there were record ticket sales during the first four days and spontaneous pop-up performances in the wake of cancellations. The Next Stage Theatre Festival, the Fringe's winter programme, provides an annual jump start to another year of theatre. Read our full preview of the fest here. Until January 19 at Factory Theatre (125 Bathurst St,), visit the Toronto Fringe Festival website for tickets and schedules.

Long Winter
Oh yeah there's one of these every month! This one's going down tonight. Roll call: Rae Spoon, Isla Craig, B.A. Johnson, Princess Century, Doug Tielli, Weaves, Derek was D-Sisive, Absolut, Sydanie, Bizzarh and Ronley Tepler and the Lipliners are all up for the pay-what-you-can music show, plus there will be art and video installations, dance performances, a talk, an arcade, and food. Isla Craig and Weaves are on the split 7", and you can enter to win volumes 1 - 3 of the Long Winter split 7" series here. Friday, January 10, The Great Hall (1087 Queen St. W.), 7pm, pwyc.

Fresh Snow at Class of 2014
Fresh snow are a Class of 2014 highlight who made our top albums of 2013 list after becoming one of Wavelength's "incubator bands" earlier in the year. If you like your rock to trance out (in a non EDM way) check this 12 minute track. It's no Magical Unicellular Music, but they could hang out together. Get up to speed on Class of 2014 our full preview of the series here. Saturday, January 11, Silver Dollar (486 Spadina Avenue), 9pm, $6.

Neil Young Honor The Treaties benefit
On Sunday Neil Young himself will play Massey Hall for a good cause. All proceeds - all of them - go to the Athabasca Chipewyan First Nation Legal Defense Fund for their fight against oilsands developments. Diana Krall will play as well. Similar benefit concerts will also take place in Winnipeg, Regina, and Calgary. As one might expect, this show is already sold out. You can donate directly to Honor the Treaties here. Sunday, January 12, Massey Hall, Sold Out. 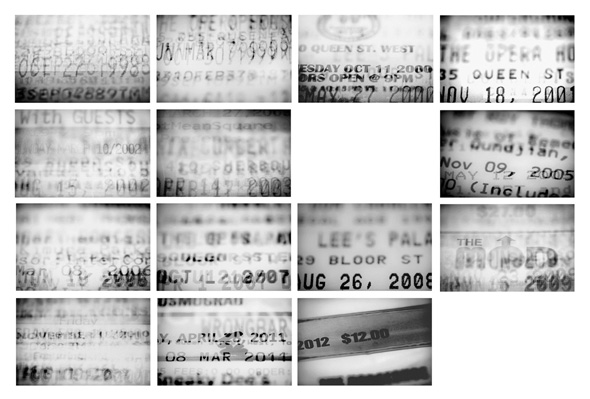 Opportunity Cafe
If you're looking for something curious and different to do this weekend, Oz Studios is the place to go. From now until January 16th, Oz is hosting Opportunity Cafe, which will combine "cheap drinks and snacks" and a Starving Artist Supper with a gallery shop/bazaar/bodega (including what looks to be a junk sale and swap), a nightclub, movie screenings, announcement readings, live performances, and um, free wifi! This is the kind of event you just need to show up at. This weekend's nightclub event is Saturday night, and regular hours are 2pm - 8pm, with the bistro starting at 5pm. Until January 16th, Oz Studios (134 Ossington Ave).

James Adomian
James has a resume many comedians would kill for. NBC's Last Comic Standing, MADtv, Jimmy Kimmel...hell, he even had a couple of sold-out shows in Seoul! What impresses me even more is that he's an alumnus of the Sunday Company at The Groundlings Theatre, which has produced household names like Conan O'Brien and Jimmy Fallon. This pedigree means that he has the ability to act, improvise, and perform stand-up at a high level. Oh yeah, and in the clip above, he`s doing an awesome joke about Game of Thrones in which he mentions Kenneth Branaugh, which is pretty badass. Saturday, January 11, Comedy Bar (945 Bloor St W) 9PM & 1030PM, $20.

Black Weirdo the Party
Though she's been making waves in the city's underground for a while, Shi Wisdom is really picking up steam in Toronto, so you'd better see her now before she's out of reach. She's the headliner tonight at Thee Satisfaction's Black Weirdo Party at the Steady. JusMoni and Ayo Leilani are also performing. Get ready for things to get hot and steamy, and don't forget to try the southern style food (vegans options galore). Friday, January 10, The Steady Cafe & Bar (1051 Bloor St W), 9pm, $12.

Rupaul's Drag Race - Battle of the Seasons
Oh-em-gee, turns out the holidays are just getting started - Rupaul's Drag Race is touching down in Toronto for Battle of the Seasons on Saturday night. The show stars Jinkx Monsoon Fanpage, Manila Luzon, Ivy Winters, Carmen Carrera, Willam Belli and Pandora Boxx, and will be hosted by Michelle Visage Radio/TV Hostess Fan Page. Showtime is 10pm, but if you have VIP tickets entry is at 8pm. Saturday January 11, The Danforth Music Hall (147 Danforth Avenue), general admission 9pm, $25. 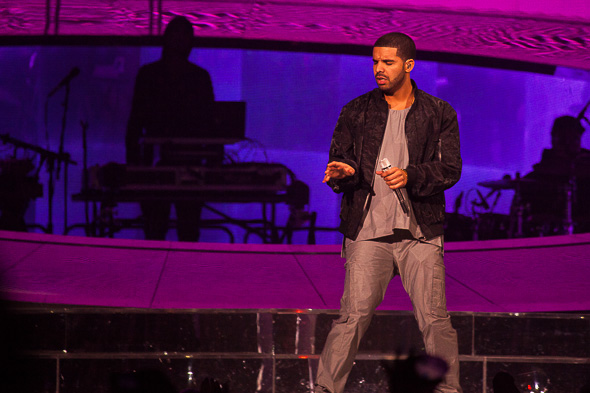 Drake Night
A terrible lie was floating around the internet that Drake would not be at The Raptor's Drake Night this weekend. That blasphemous rumour appears to be false, according to Extra Mustard, who posted an initial newsbite that Drake would be AWOL - quote: "Correction: The Raptors have informed us that the team will be wearing their standard black alternates on Drake Night, and that Drake is expected to be in attendance. In other words: Ignore everything we said below." Phew. Saturday, January 11, Air Canada Centre, 7pm, $69+.

Toronto International Boat Show
I think the idea here is you go to the Boat Show, check out some boats, and - assuming you're hauling a bag of money around that's giving you a sore shoulder - you spend the bag of money (aka swipe your credit card) on a choice boat from the show. Then that model becomes yours to enjoy when summer rolls around. Personally I'm just going to wear blue pin stripes and wander around the Direct Energy Centre Instagraming myself living la vida yacht life all week. January 11 to 19 (preview January 10), Direct Energy Centre, Exhibition Place (100 Princes' Blvd), varying hours, $12 - $100