Weekend events in Toronto is our guide to events happening this Friday, Saturday and Sunday. Here's what's happening in Toronto this April 26-28, 2013.

For more film listings, check out This Week in Film. 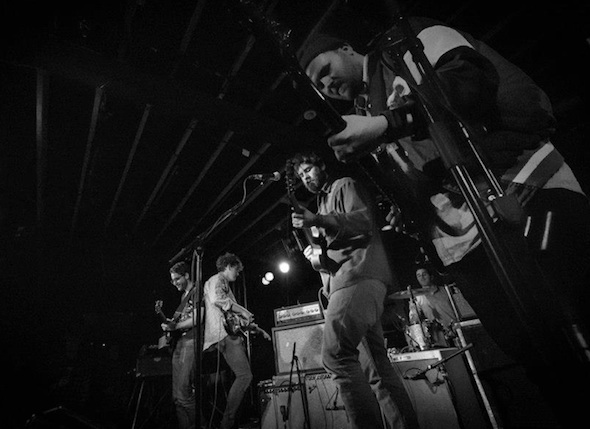 GROUNDERS and Program Split 7" Release Party
GROUNDERS and Program celebrate the release of their David Newfeld-produced split 7" with a party at Oz Studios this Saturday night. Newfeld, the producing brains behind Broken Social Scene's You Forgot It in People, will DJ—a rarity—as people gather to collect copies of the album that remixes GROUNDERS' "Speedboats" with Program's "Waiting". Arrive before 10PM to enjoy Kronenbourg Beer and pay the extra $4 to get the album.
Oz Studios (134 Ossington Avenue), April 27, 2013, 9PM $6 without the album, $10 with

For more music listings, check out This Week In Music and April Concerts.

Night of the Living Dead
Night of the Living Dead jumps from screen to stage at Theatre Passe Muraille this Friday night. The 1968 George Romero indie hit about a group hiding in a farmhouse as zombie mobs attack premieres on stage in Toronto for a one-month engagement. Starring Darryl Hinds, Mike Nahrgang, Dale Boyer, Trevor Martin, Gwynne Phillips and Andrew Fleming, the play is directed by Christopher Bond with George Romero acting as executive producer. Tickets are available through the Night of the Live Dead website.
Theatre Passe Muraille (16 Ryerson Avenue), April 26-May 19, 2013, 7PM $49.50-$54.50

For more theatre listings, check out This Week In Theatre.

2nd Floor Style Market
A Friday night pop-up market, 2nd Floor Style offers goods by 20 of Toronto's best local designers and brands. Fashion and beauty products by brands like Stella & Dot, Hypercube Clothing and Laborde Designs will be available on Friday night at The Spoke Club. Appetizers will be served and there will be a Four Seasons spa gift pack giveaway. Registration is required to the members only venue through the 2nd Floor Style eventbrite page. And don't forget to bring cash, moneybags. Some vendors won't have credit or debit machines available.
The Spoke Club, 2nd Floor (600 King Street West), April 26, 2013, 5PM Free

Gluten-Free Garage: The Sequel
A pop-up marketplace with over 50 vendors selling gluten-free foods and skincare items launches at Artscape Wychwood Barns this Saturday. Gluten-free chefs will hand out samples of their food and guest speakers will talk about incorporating gluten-free foods into a modern lifestyle. Keep an eye out for The Gourmet B1tches food truck! All proceeds go to the Canadian Celiac Association.
Artscape Wychwood Barns (601 Christie Street), April 28, 2013, 10AM $10

For more food events, check out our post on upcoming Toronto food events.

Gold & Ginger
Gold & Ginger is a partnership between artists Leanne Shea Rhem and Zac Kenny and the couple will open their home and studio to the public for their first art sale and party. Displaying a series of drawings, prints, paintings and accessories, each item will be for sale, the money will support the artists as they go on a research-based trip through Europe and India. Feel free to stop by the studio or check out the work on their website at GoldandGinger.com.
Gold & Ginger Studio/Apartment (1294 Bloor Street West, Apartment 201), April 27, 2013, 1PM Free

@Smash: Clash in Session
Eight OCAD artists celebrate non-commissioned art by displaying their interpretation of freedom of expression at Smash, the Dundas West furniture store. Pinpointing the idiosyncrasies of their personal aesthetic for the purposes of the show, each represents themselves through their work. This one-day only show is also a party so bring money for booze because, unfortunately, the brews ain't free, too.
SMASH (2880 Dundas Street West), April 26, 2013, 7PM Free

PULP: paper art party
Draw on the walls and look at what can become of old paper plates and cups at Metropolis Factory, where PULP opens on Saturday evening. Looking at paper in renewed ways—not just recycled—this exhibit features works created out of reclaimed paper products. There will be drinks and food trucks on hand as well as a performance by The Lemon Bucket Orkestra and DJs. Regular admission tickets are available at pulpartparty.ca with proceeds going toward Architecture for Humanity. Make sure to come hungry as Per Se mobile will be serving up gourmet street food from 8pm until midnight.
Metropolis Factory (50 Edwin Avenue), April 27, 2013, 8PM $15

For more comedy listings, check out This Week In Comedy.

Power of Pretty Fashion Show and Clothing Sale
Supporting the Because I Am A Girl campaign, the Power of Pretty Fashion Show will showcase donated items from the Power of Pretty Clothing Drive from last February. Following the runway show, the clothing will be displayed as part of the clothing sale, where proceeds will go directly toward the campaign. Following the sale, all unsold items will be donated to various shelters across the city.
Stirling Room (55 Mill Street, #16), April 27, 2013, 7PM $20

For more fashion listings, check out This Week In Fashion.

The Dark Room 2.0
The Dark Room 2.0 is a group exhibition from over 60 North American artists working with alternative process and analogue photography. Opening at 918 Bathurst on Friday afternoon as an alternative to CONTACT Photography Festival's upcoming shows, each artist will exhibit their best piece representing their practice in non-digital photography and present to a jury for a chance to appear in a select show at Gallery 918 on May 7. Dark Room 2.0 runs in conjunction with the festival, on display until May 31.
918 Bathurst Centre for Culture, Arts, Media and Education (918 Bathurst Street), April 26-May 21, 2013, 1PM Free

Photo by Max Hurd and courtesy of GROUNDERS Facebook page.