Family day weekend events in Toronto 2013 is our guide to events happening this Friday, Saturday and Sunday. Here's what's happening in Toronto this February 15-17, 2013.

For events on the upcoming holiday Monday, please see our post on Family Day events & activities in Toronto.

Chinedesign | Fashion Preview and Masquerade
Toronto clothing label Chinedesign celebrates the launch of its second exhibition this Friday night with a multimedia fashion presentation at the Daniels Spectrum. Part of TD Then & Now's Black History Month programming, the presentation will be followed by a masquerade ball, where participants are asked to conceal their faces until midnight. Tickets are available through Chinedesign.
Daniels Spectrum (585 Dundas Street East), February 15, 2013, 9PM $20-$60

Sodom Vampire Love Ball 4
The latest in Club 120's popular Sodom series, this vampire-meets-Valentine's-themed party night with feature DJs Sumation and Relentless, vampire-themed dancers, and the crowning of a new Queen of Sodom for 2013. Goth and TV-inspired outfits are welcome (think True Blood and Underworld). For more on Sodom, check out today's post on the series.
Club 120 (120 Church St.) February 16, 2013 10PM $7 before 11PM, $10 after

101 Markets
101 Markets returns to 3030 Dundas West for a mid-winter pick-me-up this Sunday morning. Pick through antiques, jewelry, knitwear, vinyl and more, as vendors sell handmade and used goods in this Junction bar (which will be open for brunch!) throughout the day. The market is free and runs until 5PM but the early bird gets the worm because the good stuff goes fast.
3030 Dundas West (3030 Dundas Street West), February 17, 2013, 10:30AM Free

Claire, From the Bus
Kjartan Hewitt's original play Claire, From the Bus asks that question that many men will hear in their lifetime, "Seriously. How old is she?" A play about sex politics and morality starring Ennis Esmer, Mayko Nguyen, David Reale and Bryn McAuley, Claire, From the Bus follows Ralph on his 31st birthday when he meets a girl on public transit who aggressively pursues him, before forcing Ralph to question her age and the motive behind her tactics. The show opens Friday night and runs until the 28th at The Storefront Theatre.
The Storefront Theatre (955 Bloor Street West), February 15, 2013, 8PM $19-$24 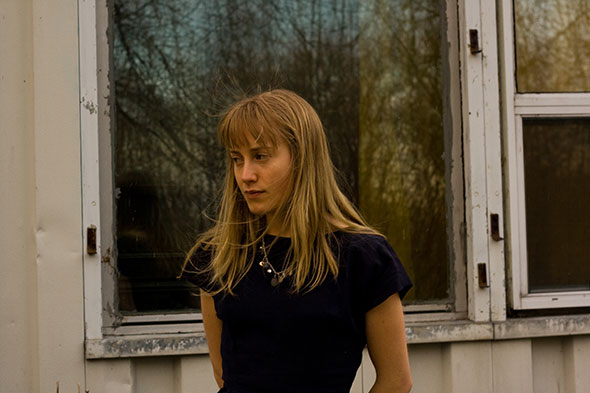 Passion Pit
Massachusetts indie synthpop band Passion Pit plays the Kool Haus this Saturday night on their current tour promoting their second studio album Gossamer. The five-piece, whose name derives from a slang term for the "romantic" spot of drive-in theatres, have achieved success with their first single "Take A Walk" off the current album and will play a full set this weekend for Toronto audiences. Indie couple Matt & Kim will play an opening set for the band. Tickets available through Ticketmaster.
Kool Haus (132 Queen Street East), February 16, 2013, 8PM $41.75

The Weather Station Duets Launch
Tamara Lindeman, who performs under the moniker The Weather Station, launches her duets series of two song singles along with her songwriter friends this weekend at the Dakota. Named the next big Toronto indie act, The Weather Station will perform with her personal favourites Baby Eagle, Marine Dreams, Ryan Driver, Matt Cully, Misha Bower, Felicity Williams, Carleigh Aikins, Simone Schmidt, and Tex Message this Friday night in an early set. To set the mood, photographs by filmmaker Colin Medley will accompany the music along with text written by Lindeman herself.
The Dakota Tavern (249 Ossington Avenue), February 15, 2013, 7PM $10

Andy Griffiths at Winterfolk XI
Local folk artist Andy Griffiths may have joined the music industry later than most but his sincere talent has led him to be a favourite amongst Toronto audiences. Participating in this weekend's 11th annual Winterfolk, a blues and roots festival taking place at Delta Chelsea Hotel, Griffiths will be joined onstage by Chris Bennett, Russ Boswell and Norm Lucien this Friday for one of the weekend's most anticipated shows. Special events will take place throughout the festival, including a special show honouring local legend Brent Titcomb, and over 50 performances by blues, roots and folk musicians. The festival closes on the 17th.
Monarch's Pub at the Delta Chelsea Hotel (33 Gerrard Street West), February 15, 2013, 7PM Free ($10 suggested donation)

For more music listings, check out our This Week in Music and February Concerts posts. And find out who's playing at Wavelength 13 with our festival preview post.

Friday and Next Friday Double Bill
The 1995 Ice Cube comedy Friday and its sequel Next Friday share a screen at Projection Booth's Friday evening double bill. The 420-friendly screenings will feature a comedic warm-up with stand-up sets by Sandro Veri, Paul Thompson and Rob Mailloux, all of which are included in the entrance price. Comedy and cannabis go well together, so enjoy the Friday films as they were intended.
Projection Booth (1035 Gerrard Street East), February 15, 2013, 7:30PM $10

The Damned Funny CFI Comedy Show
The Centre for Inquiry presents an evening of comedy at O'Grady's Pub on College this Friday night hosted by the always-vile David Heti. The night will feature stand-up sets by three local comedians, including Hunter Collins of "Video on Trial," Kathleen Phillips from "This Hour Has 22 Minutes" and "Dan For Mayor" and Eric Andrews of "Prank Science." The show is free but donations will be accepted to help feed starving comedians.
O'Grady's Pub (171 College Street), February 15, 2013, 8PM Free ($10 suggested donation)

Yes, In My Backyard Festival
Dump the NIMBY attitude and welcome the neighbourhood in at the Yes, In My Backyard Festival. Locals will gather at the Reference Library this Saturday morning to promote neighbourhood groups as a force for positive change in the community, where development ideas and strategies will be discussed. Everyone is encouraged to engage in the pop-up dialogues that will be happening throughout the day and to catch a screening at the Made IN Toronto (MINT) Film Festival. Children are welcome.
Toronto Reference Library (789 Yonge Street), February 16, 2013, 11AM Free

Great Canadian Chill
The Great Canadian Chill breezes through Dundas Square this Sunday and Monday for a nationwide fundraiser to support pediatric oncology. Activities for all ages and a nighttime chill party will take place before a series of Polar Bear-style cold water dips will take place in a pool in the heart of the square. Live performances and food tastings will take place throughout the day. Funds raised will go toward Sears Canada Charitable Foundation.
Yonge-Dundas Square (1 Dundas Street East), February 17, 2013, 12PM Free