Weekend events in Toronto is our guide to events happening this Friday, Saturday and Sunday. Here's what's happening in Toronto this January 11-13, 2013.

Fucked Up's Long Winter Pt. 3
Fucked Up hosts the third installment of the four-party Long Winter series, a film/art/rave experience complete with food and music. Buck 65, S.H.I.T. and Picastro will perform with another four acts to follow, while artists such as Katie Stelmanis of Austra, Jonah Falco and Scott Cudmore will premiere 8 art, video and installation works. Katie Mathieu will be providing the eats at this incredible event that will take place throughout The Great Hall with something for all ages. Entrance fee is pay-what-you-can.
The Great Hall (1087 Queen Street West), January 11, 2013, 8PM PWYC

Beam Me Up
Digital Needle is a brave DJ duo--they resolutely spin disco at a time when disco's not exactly the genre of choice. Joined by Cyclist, and the live, soulful singing talents of Shelley Hayes, they might just have you breaking out some moves worthy of Travolta.
The Piston (937 Bloor St. W.) January 12, 2013, doors at 10PM, $5 before 11PM ($10 after)

ExpeRAWment in Rhea's Kitchen
Toxicologist Dr. Rhea Mehta invites those interested in learning about raw cooking into her personal kitchen for a two-hour demo and dine workshop this Sunday. With a pre-planned, all vegan menu in place, Mehta will walk participants through proper raw cooking techniques while teaching the benefits of such a specific diet. Exact time and location will be released once tickets are purchased through Uniiverse.com.
81 Navy Wharf Court, January 13, 2013, $50

Shamrock Burgers' World Monster Sham Eating Contest
A Scarborough landmark that has been serving some of the GTA's best burgers for over 40 years, Shamrock Burgers plays host to a massive eating contest this Saturday afternoon. The Monster Sham Challenge will see semi-finalists compete to eat as many double-stacked 10oz burgers with all the toppings as they can in 10 minutes. Watch champion eaters put these doubles down to win the finalist title of the World Monster Sham Eating Contest. Finals take place on February 2nd.
Shamrock Burgers (6109 Kingston Road), January 12, 2013, 1PM Free

L'Altra Italia Italian Movie Series
L'Altra Italian showcases Italian contemporary cinema for Canadian audiences and this Friday evening, this will include a screening of La Vita Facile (The Easy Life). Playing in Italian with English subtitles, this Lucio Pelligrini comedy is the story of a successful Italian doctor who agrees to volunteer in Africa only to be caught up in a bribery scandal. Tickets will be sold the day of the screening from 6:30-8:45PM at Maison Mercer (15 Mercer Street). The ticket price covers the preceding reception and the screening.
TIFF Bell Lightbox (350 King Street West), January 11, 2013, 7PM $40 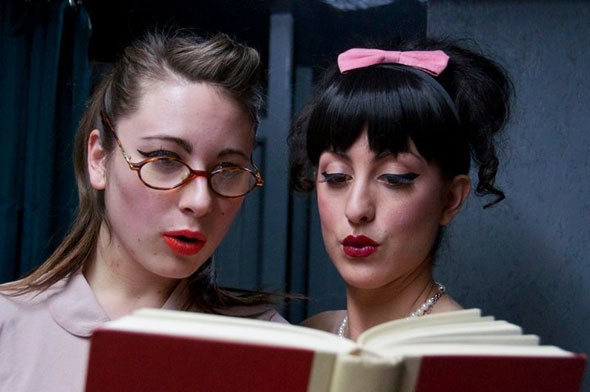 Blood Ballet Cabaret presents: Illuminatease
The Blood Ballet Cabaret's 2013 tour is bringing them to the Junction tonight for one night only (they're based in Montreal), with a "titillating" cabaret show that promises to explore conspiracy theories like celebrity assassinations and the moon landing. The show habitually uses circus, musical and burlesque performers, so it's sure to be a feast for the senses.
3030 Dundas West (3030 Dundas St. W.), January 11, 2013, doors at 8PM, $10

CAFTCAD Presents: An Evening with Costume Designer April Ferry
Award-winning costume designer April Ferry has worked in film and television for over 30 years, and will sit down with The Canadian Alliance of Film & Television Costume Arts & Design to discuss her career milestones. Sharing her creative approach from a lengthy career that has seen her working on films like Donnie Darko, Robocop and Planes, Trains and Automobiles, Ferry will impart wisdom on young students and lovers of costume design. A wine and cheese reception will follow.
Camera (1028 Queen Street West), January 12, 2013, 8PM $40 general, $28 student/member

Ginuwine and Bobby V Live
R&B wonder Ginuwine is coming to Toronto to play Sound Academy with opener and fellow R&B artist Bobby V this Saturday night. Ginuwine may be best known for his 1996 hit song "Pony," but the artist has released six follow-up albums since his breakout debut. Bobby V, a frequent collaborator with Nicki Minaj and Lil Wayne, will open the show. Comedian Jay Martin will host the evening. To prepare for Saturday night's show, it might also be worth your while to check out this gem.
Sound Academy (11 Polson Street), January 12, 2013, 10PM

The Neil Young'uns Live
A Neil Young tribute band with an unbelievable arsenal of songs to cover, The Neil Young'uns perform live at the Danforth's Linsmore Tavern this Saturday night. Covering not only the music of Neil but also Buffalo Springfield and Crosby, Stills, Nash & Young, their impressive song list covers the entire span of Young's career. Tickets are available in advance by calling 416-466-5130 or at the door.
Linsmore Tavern (1298 Danforth Avenue), January 12, 2013, 9:30PM $5 advance, $10 door

Chris Shepherd: Wandering
To Chris Shepherd, wandering means found objects, nature and hiking, the city, formalism and minimalism. In the opening of his photography show, Wandering, Shepherd presents a series in a city setting that observes the manipulation of the urban context. Opening Saturday afternoon, Shepherd's colourful photographs that cross nature and industry will be on display at Bau-Xi Photo on Dundas West. The photographer will be in attendance if you feel like wandering with him.
Bau-Xi Photo (324 Dundas Street West), January 12-26, 2013, 2PM Free

The Right Mistake
Artist Chris Walsh explores geometric shapes through oil on canvas in The Right Mistake, his latest solo exhibition opening at Walnut Contemporary this Saturday afternoon. The local painter observes cities as examples of a civilization layer cake and his grid-like pieces exemplify this view. His latest series of paintings comes on the heels of the success of his last show, Gesture & Geometry. The artist will be in attendance at the show, which closes January 31st.
Walnut Contemporary (201 Niagara Street), January 12, 2013, 2PM Free