Weekend events in Toronto is our guide to events happening this Friday, Saturday and Sunday. Here's what's happening in Toronto this December 21-23, 2012.

END OF THE WORLD

End of the World Toronto
Well, even if it isn't the "End of the World," we know that the end of 2012 is near, and it's the Holiday season, so it's definitely time to let loose. What's being billed as "the biggest end of year College/University party in Ontario" goes down tonight at The Government/KoolHaus compound, and it's bound to be an adrenaline-fueled and sweaty affair, with high sound pressure levels and smiles all around. Featured DJs include: Flipside, Joe Ghost, 4Korners, DJ Couture, Sean Stealth, DJ Medz, DJ Pxl, Argent, DJ Faded and more. A happening mix of electronic, hip hop, mashup, and other styles is promised.
Guvernment (132 Queen's Quay East) December 21, 2012 10PM $25

For other "end of the world" events, check out our round-up of Mayan Apocalypse celebrations happening tonight around Toronto.

Winter Prom
Now for something completely different. Forget your winter blahs and holiday blues, and dress up in your finest frocks for Cinecycle's Winter Prom. There'll be live music, dancing, drinks, prizes, and like every good prom, voting for the prom king and queen. Best of all, proceeds go to Horizon Children's Center.
Cinecycle (Coach House at 401 Richmond Street) December 22, 2012 8PM $15

Kensington Winter Solstice
The Kensington Winter Solstice has been a tradition for over two decades, and is now in its 23rd year. It begins as a lantern-touting parade then winds through to Alexandra Park for its big finale. Expect fire, costumes, music, and the burning of an effigy--all to welcome the onset of yet another winter.
Oxford St. and Augusta Ave. December 21, 2012, parade starts assembling at 6PM

UK Underground 10th Annual Santa Party
When something's been running for 10 years, you know it's a good party. Join resident DJS Tigerblood and MRK, as well as guests Parallels and Viva Mars for a night of holiday dancing cheer. There'll be cheap drinks, and those who get festive (by dressing up as Santa or some approximation thereof) will get in free before midnight.
Virgin Mobile Mod Club (722 College St.) December 22, 2012 10PM $10

Afrika Bambaataa w/ Soul Motivators
The man known as "the Godfather of Hip Hop," Afrika Bambaataa, hits Revival tonight. This man has been at it for decades, and has collabed with everyone from James Brown, to John Lydon, to the cast of the famous 1985 anti-apartheid "Sun City" project, and was nominated for Rock 'n' Roll Hall Of Fame induction a few years back. One of his first hits, Planet Rock, combined an original melody with hip hop breaks and passages from a Kraftwerk tune to create a new genre known as 'electro funk.' Tonight at Revival, fans can anticipate a packed house and solid beats, with Soul Motivators, and MC K-Swift opening, and support from DJs Farbsie Funk, Tasc, and others.
Revival (783 College Street) December 21, 2012 9:30PM $25

Canadian Brass Christmas
A Christmas concert with The Canadian Brass is a Toronto tradition that continues Sunday afternoon at Koerner Hall. This ensemble was established in 1970, and founding member Dr. Charles Daellenbach's tuba still anchors the group's great sound and arrangements. This afternoon concert promises to be a good one, with an excellent program consisting of everything from Bach and Brahms, to Glenn Miller and Vince Gueraldi, with some traditional holiday fare added as well. As an added bonus, The Canadian Brass will be supported by students from the U of T Faculty of Music and the Conservatory's Glenn Gould School on a few tunes.
Koerner Hall (273 Bloor Street West) December 23, 2012 3PM $45

For more music listings, check out our weekly Hot Ticket.

BeerProv - Christmas Sweater Edition
It's all about spontaneity, and no one knows that better than the folks at The Comedy Bar. Tonight's edition of BeerProv has a special holiday theme: Christmas sweaters. Yes, the comedic talent in the house are being encouraged to wear their fuzziest, and ugliest. An all-star cast should make this a great one: Dave Babin, Evan Arppe, and others will perform, Chris New will be manning the piano, and tonight's host is Jim Robinson.
Comedy Bar (945 Bloor Street West) December 21, 2012 10:30PM $12

For more comedy listings, check out This Week in Comedy.

Gregory Crewdson: Brief Encounters
Tonight, Ben Shapiro's Gregory Crewdson: Brief Encounters premieres at the Bloor Cinema. This film was a New York Times Critics' Pick, and follows Crewdson, a well known photographer and educator (currently a professor at Yale) as he captures suburban American life from a unique and dramatic perspective. His work is influenced strongly by people outside of his medium like Hitchcock and David Lynch, and he relies on an extensive crew similar to that used for shooting a film. A decade of "embedded" filmmaking went into this documentary, and it reveals an artistic process that is meticulous and extravagant in the world of photography, with results to match. Gregory Crewdson: Brief Encounters will be playing until January 3rd.
Bloor Cinema (506 Bloor Street West) December 21, 2012 9:30PM $11

For more film listings, check out This Week in Film. 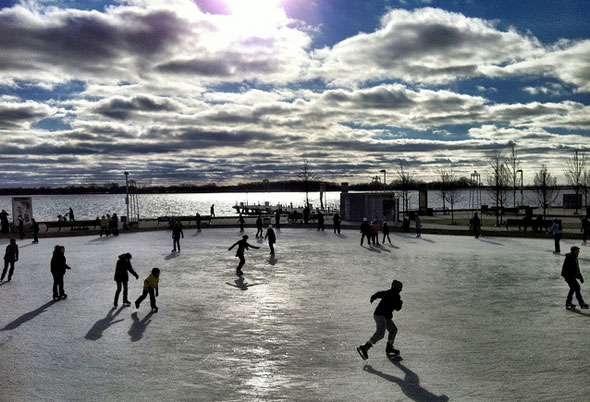 1 LOVE T.O. Holiday Ice Skating Party
There is truly no better way to celebrate the holiday season than ice skating, which makes Harbourfront Centre the place to be on Saturday evening. The third annual 1 LOVE T.O. Holiday Ice Skating Party will be in full swing, and that means a great night of exercise, music, drinks, hot chocolate, and everything you love about winter. This year the event has teamed up with Skate To Great, a non-profit organization that provides access to skating for every Canadian child. They will be collecting your used skates and hockey equipment at the event, so please bring whatever used gear you are able to donate. Hosting the event is T-rexxx, and music will be provided by DJ DLux.
Harbourfront Centre (235 Queens Quay West) December 22, 2012 8PM

Nutcracker
The Nutcracker is a long-standing Christmas tradition, and while the National Ballet of Canada's production is recognized for being among the most lavish, there are other local companies that put on an equally good show. The Pia Bouman School of Ballet's production sees some of the most promising students of the program gliding, jete-ing, and otherwise twinkle-toeing across the stage.
Lismer Hall, Humberside Collegiate Institute (280 Quebec Avenue) December 21 7:30 PM, December 22 and 23rd 2PM $15-$40

Toronto Poetry Slam
The regular and raucous poetry series, the Toronto Poetry Slam, goes down at The Drake Hotel Saturday night. If you've never been to a "slam" before, you should know that this ain't your grandmother's poetry reading night! A poetry slam is essentially a competitive poetry reading, and the origin of this type of event goes back to the jazz scene in mid '80s Chicago, where poetry nights were given more exposure by adopting this competitive edge and the audience participates as judges. Tonight's prize is $75 - if you think your words have what it takes, arrive early and sign up!
The Drake Hotel (1150 Queen Street West) December 22, 2012 7PM $5

The Dark Of The Moon Festival
The second Dark Of The Moon Festival takes place tonight. This is a very interesting marketplace-style event with psychics, tarot card readers, holistic health practitioners, artisans, and others set up and displaying their wares for your persual and purchase. There will also be entertainment in the form of live music, speakers on various subjects (including ayurvedic medicine and meditation), bellydancing, live art, and much more. This is a special Winter Solstice edition of this festival, and admission is free. An afterparty follows at 9pm.
The Back Lot Film Studios (40 Butterick Road) December 21, 2012 12PM to 9PM

OTHER WEEKEND EVENTS ON OUR RADAR

Photos by Will Ohare and MichaelTutton in the blogTO Flickr pool