Weekend events in Toronto is our guide to events happening this Friday, Saturday and Sunday. Here's what's happening in Toronto this November 2-4, 2012.

Toronto Design Offsite Festival Warm Up Party
Toronto Design Offsite is back with the 2nd annual TO DO Warm Up Party, a free event gearing up to Toronto Design Week. Edition Richmond will transform into an event venue on Friday night, complete with cocktails and dancing, with DJ's Joe Blow and Randall will provide the beats for the evening. Naturally, design elements will be incorporated into the environment so show up to enjoy the atmosphere and warm up with a drink.
Edition Richmond (850 Richmond Street West), November 2, 2012, 8PM Free

Foodies on Foot Favourites Food Tour
Foodies on Foot are notorious for having the most discerning palates and this Sunday, they invite those interested in joining their secret supper club to take a tour of food journalists favourite spots in Toronto. Hidden gems and neighbourhood staples will be explored on the tour with a knowledgeable foodie guide. The tour lasts approximately 4 hours and the ticket price includes a TTC pass so the foodies can criss cross the city to sample the best foods.
Foodies on Foot Studio (75 Portland Street), November 4, 2012, 11AM $75

Winterlude Carnival Fundraiser
The Ontario Track 3 Ski Association encourages special needs and disabled individuals to learn to ski and snowboard and on Friday, November 2nd, the organization hosts its Winterlude Carnival Fundraiser at Steam Whistle Brewery. Running for over 40 years now, Track 3 relies on the support of individuals who attend their fundraisers like Friday's Winterlude Carnival. Stop by the brewery to participate in the silent auction, brewery tours and other activities, including the Ride the Snowboard machine. There will be music, food and, of course, Steam Whistle to drink. Tickets are available through track3.org. All proceeds go toward Track 3 programs.
Steam Whistle Brewery (255 Bremner Boulevard), November 2, 2012, 6:30PM $35

Royal Agricultural Winter Fair
As the relationship between our food and its origins continues to erode, the Royal is as educational an experience as it is entertaining. Kids love the animals and foodie types love the produce, so unless you hate food and children, you might consider checking it out.
Exhibition Place, November 2-11. General Admission $20.

Gamercamp
Toronto's anual celebration of video games and gaming culture gears up this weekend in and around U of T. Expanding every year, you can expect to talks from some of the biggest names in the community, hands-on workshops, social events, and even a pop-up cafe from Snakes & Lattes.
Various locations. November 3-4.

Byologyc: Retreat
It's like Choose Your Own Adventure gone apocalyptic at the Brick Works this Friday and Saturday evenings with the opening of Byologyc: Retreat. Debuting at this year's Nuit Blanche, ByoLogyc, a fictional company in biotech lifestyle enhancement solutions, has created a product that releases a deadly outbreak in Toronto. Audience members will purchase tickets based on how involved they will be with the resolution--from a leader in creating propaganda to someone on the front lines fighting the company to a board member who sits back and enjoys the show. Join the interactive adventure that puts you in a sci-fi story with 300 other members of the "audience" during the end of the world.
Evergreen Brick Works (550 Bayview Avenue), November 2-3, 2012, 6:30PM, 9:30PM $49.99-$99.99

Community Series
Community 54 is hosting a series of pop-ups, which get underway tonight with Brian Vu's brand of military-style wear LATrE. Perhaps even more exiting than the clothes, though is that DJ Lissa Monet will be doing her thing at the shop. That's worth paying a visit for right there. There's a guest-list in effect tonight, but the pop-up is open tomorrow as well.
Community 54, 1275 Queen Street West

Accessory Swap Party
Accessories were made for swapping and the ladies of Bobette and Belle are acknowledging that by hosting a swap party inside their pastry shop this Saturday. Guests are asked to bring scarves, belts and jewelry that they wish to swap, and wear white shirts to maximize the effects of the complimentary colour analysis and style tips they'll receive from experts. Make-up artists, prizes, goody baskets and finger foods will all be available at the event. Tickets can be purchased at yourshopgirl.eventbrite.ca.
Bobette and Belle (1121 Queen Street East), November 3, 2012, 6PM $49 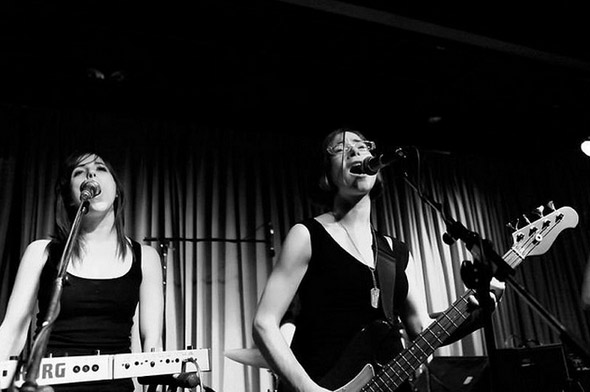 Sheezer
There's always that one party that happens after Halloween but not to worry, the girls of Sheezer are throwing this one so it has to be good. The all-girl Weezer cover band that everyone, including Weezer, loves performs at the 3rd annual Halloween party at Lee's Palace this Friday night. Joined by special guests Planet Creature and Pins and Needles, the doors open at 9PM and the band will hit the stage around 10PM with new B-sides from the Blue Album. Remember, it's a Halloween party, costumes are cool here!
Lee's Palace (529 Bloor Street West), November 2, 2012, 9PM $10 advance, $12 door

Crystal Castles
Crystal Castles, the Toronto experimental electronic band comprised of Alice Glass and Ethan Kath, plays Kool Haus this Saturday night with alt rock bands Kontravoid and HEALTH. Castles, who released their sophomore album in the spring of 2010, play their home city this weekend before embarking on a five-month international tour. Crystal Castles performances are rare in Toronto so scoop up tickets while they're still available through Ticketmaster, Soundscapes and Rotate This.
Kool Haus (132 Queen Street East), November 3, 2012, 7PM $41

For more music listings, check out our Hot Ticket post and our November concerts roundup.

Textile Museum of Canada's reDesign Preview
As a precursor to Wednesday's fundraiser, the Textile Museum of Canada offers a free public preview of reDesign, a collaborative effort between artists, designers and architects who take on Eames-style furniture. Taking place at Bonham's Auction House, this is a wonderful opportunity to skip out on the $100 entry ticket to the event and observe how these artists have reimagined 40 of the iconic Eames chairs in their own vision. The previews are open to the public from 1-5PM from November 2nd to the 6th. For tickets to Wednesday's event, check out redesign2012.eventbrite.com.
Bonham's Auction House (20 Hazelton Avenue), November 2-6, 2012, 1PM Free

Painting Canada: Tom Thomson and the Group of Seven
Private lenders and public institutions around the world have generously loaned pieces by Tom Thomson and the Group of Seven to the McMichael Canadian Art Collection for Painting Canada, a new exhibit that opens this Saturday. A rare array of works depicting precious land that Canadians love will be on display as organized by the National Gallery of Canada and Dulwich Picture Gallery. The exhibit closes January 6th.
McMichael Canadian Art Collection (10365 Islington Avenue), November 3, 2012-January 6, 2013 10AM $15

Day of the Dead
With Halloween over, so is the fear of the dead where Harbourfront Centre is concerned. During the Mexican festival, Day of the Dead, Harbourfront will celebrate those who have passed by joining in on the Latin American traditions of the holiday over the course of this weekend. Mexican folkloric dancers and musicians will perform while the marketplace will be full of Mexican food and craft vendors. Altars will be placed throughout the centre for the public to pay homage to their loved ones who have gone.
Harbourfront Centre (235 Queens Quay West), November 3-4, 2012, 12PM Free

Dia de los Muertos
The Brick Works celebrates Day of the Dead, or Dia de los Muertos as it is known in Mexico, in their own way this Saturday. Contributing the Brick Works prime resource--clay--guests are invited to make traditional festival skulls and coffins while enjoying the weekly farmer's market, which will feature Latin American vendors. The Woodshed Orchestra will supply music while Maizal Quesadilla CafĂŠ owner Gabriela Ituarte shares the tradition of the Altar, where photos are laid of lost loved ones. The events take place in the Pavilions for one day only.
Evergreen Brick Works (550 Bayview Avenue), November 3, 2012, 8AM

The Human Canvas Project Exhibition and Book Launch
Author and artist Matti McLean uses the human body as his canvas and this Saturday, he reveals his works with the launch of his book, "The Human Canvas Project." A corresponding exhibit of the 100 collaborative portraits that involve paint and photography will also be on display with models from the shoots in attendance. This body-painting project opens at Glad Day Bookshop to explore the human relationship with the body for one day only.
Glad Day Bookshop (598a Yonge Street), November 3, 2012, 8PM Free