Weekend events in Toronto is our guide to events happening every Friday, Saturday and Sunday. Watch for it here on Fridays around midday. Here's what's happening in Toronto this weekend, March 9-11, 2012

Toronto ComiCon 2012
It's time for the yearly event where Batman and The Joker coexist happily in the same room without trying to kill each other (probably) and focus on getting autographs and limited edition figurines. To those looking to kick it off with drinks and dancing, there's a launch party at Tattoo Rock Parlour Friday night 567 Queen Street West, $10). Toronto Convention Centre, 255 Front Street West, March 10-11, Day Pass $20, Weekend Pass $30.

"Pre-Occupied": Parkdale's Newest Pop-Up Gallery Opening
While the Occupy Movement may have been short lived compared to other revolutionary movements, it left its mark in Toronto. "Pre-Occupied" a pop up gallery inspired by said movement. The opening reception is Sunday afternoon from 3 - 5 p.m. The gallery will stay open until April 1. Hours are weekends from noon-6 pm, weekdays by appointment. Admission is free.

After 135 Years, Paint (Still) Rocks!
OCAD University is celebrating its 135 birthday tonight. They are having their Annual Drawing & Painting Rockshow/Artsale featuring work from students and alumni. Proceeds go to the Drawing and Painting Fund. OCAD University, 100 McCaul Street, March 9, 5 p.m.$5.

Steel by DK Photo Group
The opening reception for "Steel," a four artist exhibit commemorating the steel industry takes place this Friday. There will be drinks, hors d'oeuvres and music as well as the opportunity to talk to the photographers about their work and inspirations. Twist Gallery, 1100 Queen Street West, March 9, 7 p.m., Free.

Designer Cookies
The Bonnie Gordon College of Confectionary Arts is hosting a class on mastering your baking and decorating techniques. Students will be taught cookie recipes, how to decorate with fondant and royal icing and how to make stacked cookie cakes and lollipop cookies. Is your mouth watering yet? Bonnie Gordon College of Confectionary Arts, 868 Eglinton Ave W., March 11, 10 a.m. - 3:30 p.m, $225 for one day or two evenings.

More Toronto food news and upcoming events are listed in our This Week in Food post.

Shinsedai Sneak Peek Party and Screening
The actual festival might not be until July, but for those who are anxiously awaiting it, the sneak peek comes just in time. There will be a special screening of Quirky Guys and Gals, and then DJ Brandon Hocura will move the night in the party direction. Raffle tickets will be sold all night, with $1 from each ticket going to the Niji-Iro Rainbow Cinema Support Project.
Cinecycle, 129 Spadina Avenue, March 10, 6:30pm, $10.

For info about film screenings, festivals, and recently released movies, including our take on John Carter (above) and the Irish Film Festival, check out:

See our This Week in Fashion post for more recent news and events from the local fashion scene.

The Junction CD Release w/ Goddamn Robots, Trevor James & The Perfect Gentlemen
Indie rockers, The Junction are celebrating the release of their third full-length album, Grievances this Saturday at The Horseshoe. Come for some drinks and dancing and enjoy some great live performances. The Horseshoe Tavern, 370 Queen Street West, March 10, 9 p.m., $10.

Building Bands Canada - Toronto Benefit Concert
Building Bands Canada, an organization that provides free music lessons to children in low-income neighbourhoods, is having a benefit concert to support its newest location in Toronto. There will be performances, a silent auction and door prizes. The Orbit Room, 580 College Street, March 10, 6 p.m.

Feast in the East
Here's one for all those beautiful east enders. This monthly event features two of the greatest things: music and food. Playing this week are Wet Dirt, Sexy Merlin, New Positions and Doom Tickler. Buy a ticket in advance and get a free pasta dinner. Yum! Dickens Street Theatre, 35 Dickens Street, March 10, 8:30 p.m., $7/$10

More concert listings including recently announced shows can be found in our weekly Hot Ticket post.

Campaign School: Bill Fox
Bill Fox, the campaign manager, press secretary and communications director for Prime Minister Brian Mulruney will be hosting a discussion about what it took to succeed on Parliament Hill. Academy of the Impossible, 231 Wallace Ave., March 11, 12:30 p.m. 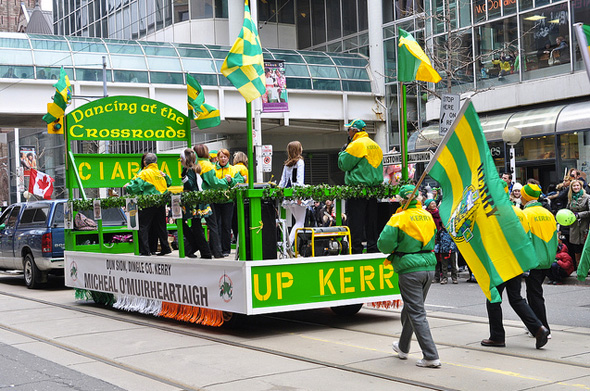 St. Patrick's Day Parade
Because most people will probably be too hungover next Sunday to enjoy the loud music and big crowds of a parade, it's happening Pre-St. Pat's day. Wear some green and come out to the parade that's turning 25 this year and celebrate Ireland, whether you're Irish or not. Bloor and St George, heading east on Bloor to Yonge, south on Yonge to Queen and west on Queen to University, March 11, 12 p.m., Free.

We Put the Spring in Springfield: Simpsons Themed Burlesque Show
Cast of the lousy Smarch weather and come inside to get warmed up at the first ever Simpsons-themed Burlesque Show. There will be raffles, trivia and, of course, sexy performances. It's a giddy little thrill at a reasonable price. Their simple costumes ain't so bad, they seem to entertain your dad. I'll stop now. Toronto Underground Cinema, 186 Spadina Avenue, March 10, 9 p.m., $12/$15

Other parties this weekend:

OTHER WEEKEND EVENTS OF NOTE