CLUBS | DayGlow Toronto
The fusion of music and visual art began long ago, and over the years, liquid light shows, live projections, and 'live painting' have all added an extra dimension to any musical experience. The Dayglow Tour, dubbed "The World's Largest Paint Party", has taken this to a new level, and audience participation is the key! This multisensory party began five years ago on college campuses in Florida, and is now touring to major cities across North America, and features DJs, circus-like spectacles, body painting, and much more. This will be a well attended party not to be missed!
Sound Academy (11 Polson Street) 9PM $36

MUSIC | INVISIBLE CITY Featuring Caribou DJ Set
Dan Snaith, aka Caribou (formerly Manitoba) will drop a special set at The Drake tonight. Caribou has been spreading his special sound all over the map lately, and has come to be an internationally recognized talent. He'll be giving his band the night off and delivering a DJ set, with visuals by Naominoumi. Tony Phatak and Grand Am will also pump out some sounds to help you get your 'move' on.
The Drake Hotel (1150 Queen Street West) 10PM $10

CULTURE | The First Annual Toronto Raw/Vegan Festival
More and more people have acknowledged raw food and the vegan lifestyle as a viable, healthy option. Even those who don't become complete 'converts' have altered their current diets after becoming aware of the benefits and environmental impact of their food choices. Today at 918 Bathurst, the First Annual Toronto Raw/Vegan Festival goes down, and it's free to attend. There will be many exhibitors, food vendors, clothing vendors, speakers, entertainment, and more. It is a great way to find out more about this phenomenon, no matter where you're at on your 'journey'.
Bathurst Centre For Culture (918 Bathurst Street) 10AM-8PM FREE

CULTURE | 88 DAYS PRESENTS: WYLING ON THE ISLAND
It's a party on the Island! Presented by the artists' collective, 88 Days Of Fortune, this twelve-hour shindig will feature a host of local and international musical talent, live painting, art installations, workshops, food, a 'licensed' beverage station.... What more do you need? The Toronto Island is truly one of the greatest places to spend a beautiful day outdoors.
ARTSCAPE GIBRALTER POINT (TORONTO ISLAND) 12PM-12AM $15

MUSIC | Pt. Anindo Chatterjee tabla solo and workshop
Pt. Anindo Chatterjee is one of India's greatest tabla masters, and has collaborated with the most prominent Indian instrumentalists, such as Pt. Ravi Shankar, Pt. Ali Akbar Khan, and many others. In the 1960s, the music of North India had an explosive effect on the Western world, transforming the perspectives of some of the West's greatest musical minds, such as John Coltrane, Terry Riley, George Harrision, and so many more. In the last decade or so, there has been a resurgence of this explosive influence in the electronic music scene via labels like Six Degrees, and artists such as Talvin Singh and Karsh Kale. Both long time fans of this music, and the curious but 'uninitiated' should definitely consider checking this out, and discovering what it is about this music that is so mind and mood altering.
Inner Garden (401 Richmond Street) 8PM $20 (concert only)

FUNDRAISER | By Divine Right + Sister + Dilly Dally + Food Fight! - Girls Rock Camp Toronto Fundraiser
Tonight at Parts and Labour, it's a musical fundraiser for Girls Rock Camp Toronto. Some heavy talent is lending a hand: By Divine Right, Sister (formerly Plumtree), Dilly Dally, and the very 'green' Food Fight! shall rock. Girls Rock Camp is an organization that helps girls discover and develop their talents, and they are encouraged and instructed by female musicians in all sorts of musical, and music-related areas such as sound, different forms of media, and even practical life skills such as self-defense.
Parts and Labour (1566 Queen Street West) 7PM $5

MUSIC | Poor Boy Clothing: Unplugged
Poor Boy Clothing hosts an all-acoustic showcase at Rancho Relaxo tonight! An interesting lineup of bands awaits you: The Clearing, Alex Wierzbicki, Mathew Winkler, and The Holdout are slated to perform in an "unplugged" fashion. Do be sure to check our Poor Boy's merch table, as these guys are known for their screenprinting skills that have made them the go-to place for bands to get their t-shirts made! Respect.
Rancho Relaxo (300 College Street) 9PM $5

COMEDY | Rob Mailloux Live Comedy Taping
Comic Rob Mailloux performs two shows tonight at The Drake Underground, for a "live comedy taping". The Windsor native's dark sense of humour has gained recognition though his appearance at the 'renegade' Just For Spite Festival, and his cannabis-culture oriented XM Satellite radio show "An Evening Of Higher Comedy". He will be joined by some special guests, including Second City alumnus David Andrew Brent, and Topher Harrison.
The Drake Hotel (1150 Queen Street West) 7 + 9PM $10

OTHER EVENTS ON OUR SUNDAY RADAR

Want to access event listings on your iPhone? Download the free blogTO iPhone app where you can look up events by date and add them to your Google or iPhone calendar. Here are a couple of screenshots: 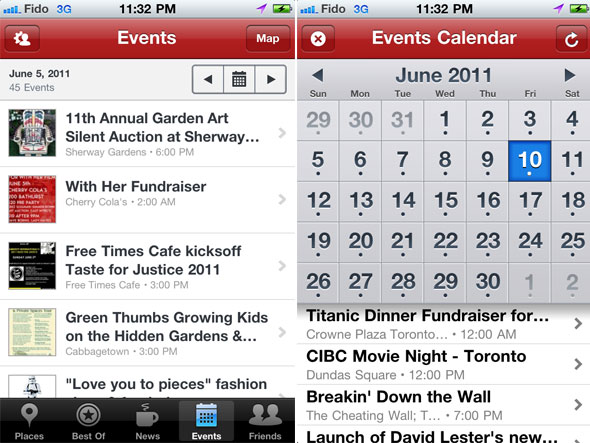