I visit the popular online photo-sharing site Flickr pretty much every day, and I use it in the most conventional way - to post my own photographs, check out those taken by others, and engage in interesting dialogue with fellow Toronto-area photography enthusiasts. Often interaction with members in Toronto groups results in face-to-face time at socials, and sometimes real, close, off-line relationships can be forged. It's social networking at its finest. 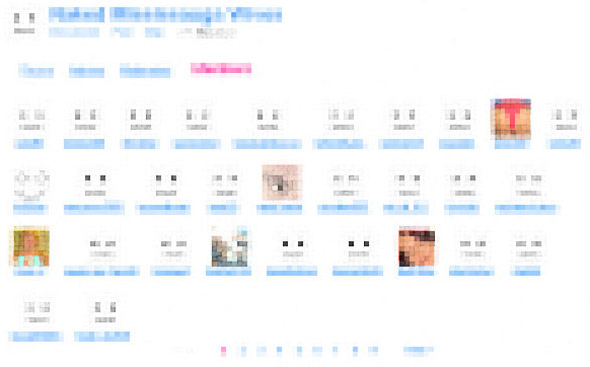 Surfing Flickr, I was checking out the profile of a new blogTO Flickr pool member. Scanning his list of public groups, I was surprised to find that he was one of over 400 (mostly anonymous) members in the Naked Mississauga Wives group. The group description is pretty straight-forward:

Anyone can join, but you must post at least one photo of your GTA wife to stay. If you haven't posted within one week you will be asked to post or you will be removed. After you have posted a photo, tell us as much as you dare about her... like what's her first name, or where does she shop, or where she works, does she take the GO train?? There will be a bunch of my wife's pics inside. Come on in and join if [you're] from the GTA.

Sounds like a little on-the-edge fun, doesn't it? I wonder if the wives know. I wonder if wives are welcome in the group. The curious amateur/citizen journalist in me took over, and I decided to go in for a little undercover investigation by creating two accounts - one playing a local 30-something year old single male seeking local females, and the other a local married female seeking fun. How did I do?

As a female:
Within one hour of posting a photo (which I sniped off the web and altered to remove distinguishing qualities), I had an older man in Georgia, USA offering up nude shots of him in exchange for more from me. Within a day, I had a local guy offer to come to my home with his camera to photograph us getting it on, and another guy offered to stop by for some quick action on his way home from work. And the offers continued to pour in all week. One married man told me that his wife has okayed his escapades as long as it didn't interfere with their family time, and another told me that he's been secretly cheating on his wife with several women he's met online over a six year period. I hardly had to type a word. Most of these offers and confessions came unsolicited and without any prompting.

As a male:
Without taking some initiative, things didn't fall into my lap in the same way they did in my female role. In fact, it wasn't until I added a few females to my contacts list on day three that any social networking started. After a couple of innocent back and forth messages with one of my new online lady friends, she cut to the chase and asked if I'd be keen to meet her and her husband at a motel on Lakeshore for some anonymous three-way fun.

And that's pretty much where it ended. I didn't want to further waste anyone's time because the offers I was receiving seemed genuine. I'm sure we all have better things to do, and I felt I'd learned enough. I quickly returned to using Flickr in my usual manner, voice, and account.

Sure, every once in a while a boob shot pops up on the public recent uploads feed. Sometimes I'll click through. You won't catch me reporting someone's public smut snaps using the "flag as inappropriate" feature. And unless another article research need arises, you can rest assured that I won't pose as someone I'm not again.

And what about wives who have had their nude photos posted to the net without their knowledge or approval? It's unlikely they'll figure it out, but if they do, I hope they kick their husbands in the nuts real hard!