Stocking stuffers with the Tn'O team

Around this time last year, I wrote a bit about holiday sex toy shopping, in the hopes that you would remember that books and DVDs are nice, but not everything in your stocking has to be G-rated. Today Jenny and I will dose you with some of the picks of the litter for those who want a little naughty with their nice. And because we love our town, we'll tip you to the best spots in T.O. to buy the goods.

One of the most interesting new sex products I've seen introduced in the last ten years, and everyone I know who's tried one swears by it... occasionally to the exclusion of partner sex. (Tn'O does not advocate the foreswearing of partner sex.)

Jenny says: "Going back to playing with shapes in second grade, U.K.-based Twisted Products has come out with The Cone, a soft, pink, vibrating cone, sporting a 7.5-inch base and weighing less than a pound.

"You can sit on it, nestle it between your thighs, penetrate yourself in full Lotus, or flop on your belly and read a book on it. It ripples at various intensity levels.

"Sculpted out of high quality silicone and packing a powerful 3000 rpm Gold Brush Motor, The Cone features 16 in-built vibe patterns (buzzing, shaking, pulsing, and more) plus an 'orgasm button' for impatient girls like me, who need to get off and get back to work." 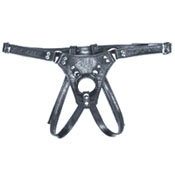 I may have mentioned this one a few months back but even so, it bears repeating. Now that I've seen one in action I can verify that this really is the Ferrari of strap-on harnesses. Made of asian leather and sleek as all getout, the Jaguar has D-rings to allow for easy adjustment. And yes, the turbo-hot design has the fashion sense to make you feel like a jungle cat in all your bend-over-boyfriend/girlfriend activities.

The Jaguar is available at Come As You Are for $95.

Jenny says: "Guys may not want to admit they jerk off in the shower, but for those that indulge in some naughty pleasures in the tub, they can also scrub away the guilt too. 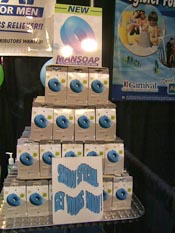 "It'll last up to about a dozen times and retails for around $10. You can pick it up online at khproducts.com or at Lovecraft and the Condom Shack." 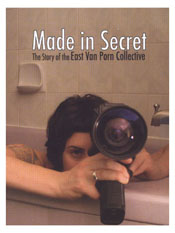 The Made in Secret DVD costs a mere $15 at Come As You Are.

Winning the grand prize for sex toy inventiveness, in my humble opinion, is the iBuzz. I simply cannot wait to get my hands on one of these things. But then, I enjoy partnering up with the musically-inclined. (Probably because my own musical taste sucks.)

"Copyright infringements aside, this could be a cool gadget, just make sure you've got something that's slow-building and ends in a crescendo - like November Rain.

Happy holidays everyone! Have fun and play safe.