Get to Know a Chef: James McKinnon, Dangerous Dan's

Before the gourmet burger crazy swept city's storefronts and menus, there stood Dangerous Dan's, the unashamedly gluttonous diner in the city's east end. Luckily for fans of the joint's enormous burgers, the shop has barely changed, and owner James McKinnon says it'll most likely stay that way. McKinnon, a longstanding member of the Riverside community, talks about witnessing some incredible eaters, his burger peeves, and what he likes to eat most when he's not eating burgers.

Do you consider yourself a chef?

No, I'm a restaurant owner and I make burgers. Our food's pretty simple and we make gravy, not a veil reduction sauce. I've always worked in the restaurant industry, but usually working in the front of the house. I was a maitre d, bartender, or waiter — things along those lines because it was quicker money. Generally in the kitchen you pay your dues for a long time, and you're a very low-paid slave for a number of years. And when I was younger, I wasn't taking a long term view. 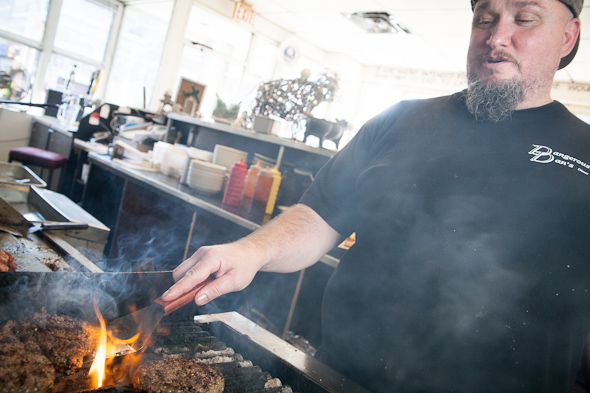 Just different restaurants. The first restaurant I worked at was this little Italian place on Yonge Street and I did a little bit of everything. It was my first experience learning how to cook and work in the kitchen. Even when I worked in fine dining, I did shifts in kitchen just to learn the menu so I would be competent with serving it.

It depends on my mood. Some days I want everything, or have something weird like an Elvis Burger, and some days just mustard and pickle. Usually I'm pretty plain — like a bacon cheeseburger with mustard, pickle and onion, and that's it.

What's something that should never be on a burger?

Processed cheese. It's got the look of real cheddar now, but I still hate the taste of it. It's just nasty. 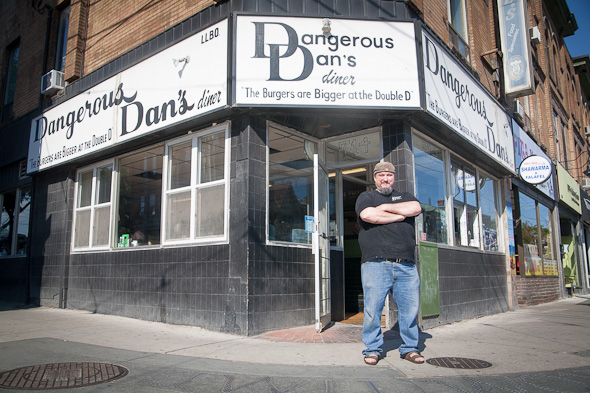 Aside from you, who makes the best burger in the city?

Barberian's Steakhouse make a great burger because they take all the trim from their aged USDA prime steaks and make it into a hamburger. It's a little more expensive than mine, but it's a great burger. But if I ever go there, I like to have a steak though because they do amazing steaks.

What do you make of all the new gourmet burger restaurants in the city?

It's good for us. We were here before the trend and we'll be here after the trend. Again, there are people trying to make a burger too healthy, something that I don't think it's supposed to be. You have to have a certain amount of grease to make it taste good. All this "organic this, organic that" — I don't want to spend $100 on a burger. I'd rather have the steak and lobster with that money. I think it's missing the point of what a burger's supposed to be, which is accessible.

Ever been shocked to see an unassuming patron finish one of your colossal creations?

Not so much any more. There was a girl, a coxswain, who bet her team that she could eat one and she did. We also had one little guy, just 110 pounds, who ate the whole thing and then had chicken wings and dessert. It's amazing how many little people can really pound back a ridiculous amount of food.

What's the craziest, most artery-clogging thing you've ever eaten?

My brother made me a 38oz T-bone steak once. It was about two and half pounds, and he put a bacon-wrapped filet mignon on top as a garnish. I had trouble eating that.

What does the future hold for Dangerous Dan's? Any changes planned?

We renewed the lease, and we're kind of waiting to see what happens with the neighbourhood, because it's changing a lot. We've been around a long time, and it's weird when all the new places keep popping up and everybody's asking if this place is affected. But nothing really affects us, because we're a local little place, and I don't think there's any one best burger in the city — there are lots of places that do a good burger. If you want a big, greasy mess, we're your guy, and if you want some thing with fois gras on it, someone else can do it for you.

My favourite thing in the world is to go sailing. I picked it up late in life and I'm not really good at it; I actually started with a kayak and worked my way up. I just love being out in the water — I find it very peaceful. I love going up to the cottage, but I don't really get up there anymore because I work a lot. Owning a small business, it's very hard to get out of Toronto so that's why I got into boating. I find that when you get out in the lake, it doesn't even feel like you're in the city anymore. 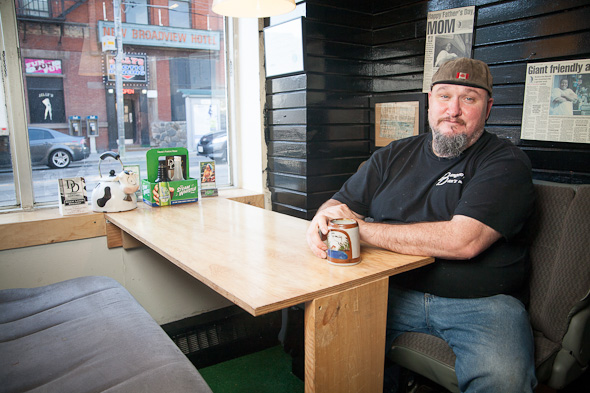 What's one dish you can't live without? Burgers

What's one food trend that needs to end? People being uneducated about organic food.